“We missed you”: Russian judokas won the medal standings of the Grand Slam tournament in Ulaanbaatar

The Russian national judo team won the medal standings of the Grand Slam tournament in Ulaanbaatar. The team won five gold, two silver and two bronze medals. The victory was celebrated by Madina Taimazova, Inal Tasoev, Matvey Kanikovsky, Mikhail Igolnikov and Makhmedbek Makhmadbekov. The International Judo Federation (IJF) allowed the Russians to participate in the competition, despite the ultimatum and the subsequent boycott by the Ukrainians. According to IJF Director General Vlad Marinescu, judo thus first of all proved that this sport is out of politics. 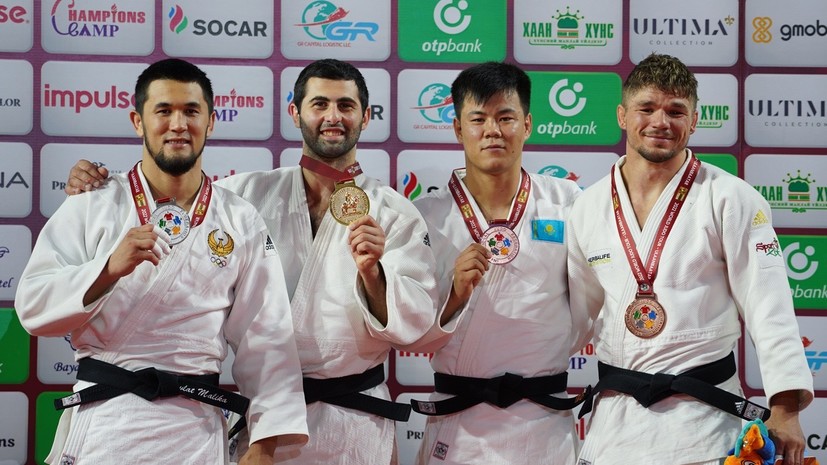 For the national team, this international start was the first after the start of the special operation in Ukraine.

It should be noted that the International Judo Federation (IJF) has become one of the few who refused to support the recommendations of the IOC and prohibit Russians from participating in competitions under their auspices.

However, until June, the domestic team did not compete at international competitions for security reasons, even missing the European Championship in Sofia.

But the Grand Slam tournament in Mongolia was of particular importance because it was a qualifier for the Olympic Games in Paris.

Therefore, it was decided to apply for it.

The return of the Russians to the international arena outraged the representatives of Ukraine.

So, the president of the country's Olympic Committee, Sergei Bubka, demanded not to violate the requirements of the IOC.

“This position was fully supported by the Association of Summer Olympic Sports this week.

The NOC of Ukraine requires all international federations to comply with the above recommendations,” said Bubka.

World and European champion Georgy Zantaraya even promised to give up all his titles if Russian athletes compete in Ulaanbaatar.

But such blackmail had no effect on the IJF and its president, Marius Wieser.

Romanian continued to adhere to the position that athletes cannot be responsible for the decisions of the leaders of their countries.

Therefore, the Russians, albeit under a neutral flag, were admitted to the Grand Slam tournament.

The Judo Federation of Ukraine did not want to put up with the current situation and announced a boycott of competitions under the auspices of the IJF until the Judo Federations of Russia and Belarus were banned from participating in tournaments in any status.

At the same time, even in the absence of the Ukrainians, the IJF was still afraid of possible conflicts and, on the eve of the competition in Mongolia, asked the coaches of the national teams, including the Russian one, to avoid provocations towards each other.

Fortunately, the tournament was held without scandals and quite successfully for domestic athletes.

Judoists, even after a long break, managed to win five gold medals.

And three of them on the last day of the competition.

In the weight category up to 90 kg there was no equal to the two-time European champion Mikhail Igolnikov.

The representative of Uzbekistan on that day knocked out the second Russian - Mansur Lorsanov, as well as the world champion Dutchman Noel van't End.

However, in the decisive battle, he could not oppose anything to his opponent.

The very first combination brought Igolnikov an advantage in "waza-ari", and the next hook sent the bronze medalist of the Tokyo Olympics to the tatami.

As Mikhail admitted after the victory, he is very happy to finally compete at the international tournament.

“When I went to the mat in the first fight, it was difficult to describe the emotions.

The first thought is that I am finally at ease, in my usual environment, finally I have the opportunity to prove myself, and this chance should be used.

And we have already met with an opponent in the fight for gold, though not at such prestigious tournaments.

And today he was on a roll, but the coaches and I sorted out his tactics, prepared for the final and everything went as it should, ”Igolnikov told Match TV.

In the final of the category over 100 kg, he was stronger than Roy Meyer.

At the same time, the statistics of personal meetings was not in favor of the Russian - the representative of the Netherlands defeated him at the 2019 World Cup in Japan and at the tournament in Antalya.

But this time, the domestic athlete managed to cope with the opponent, and it took him only 11 seconds to win.

“I set myself up for a long fight, but it turned out the way it did ... The whole tournament did not seem easy, to be honest.

Many serious guys fought, I tuned in for this tournament for a very long time, ”Tasoev admitted.

He supported his teammates and 20-year-old Matvey Kanikovsky, for whom simply getting into the final of the competition was considered an excellent result.

But the young athlete did not limit himself to silver and defeated the bronze medalist of the Tokyo Games Jorge Fonseca.

At the same time, the Russian behaved very respectfully towards the Portuguese and did not become very happy about the victory.

The opponent is already so offended that he lost, and it’s wrong to show some gestures, ”admitted the judoka.

Also, gold medals were won by Makhmedbek Makhmadbekov (up to 73 kg), for whom the victory at the Grand Slam tournament was already the third in his career, and the medalist of the 2020 Olympics Madina Taimazova (up to 70 kg).

The leader of the Russian women's team noted that the team was very warmly received in Mongolia and thanked the international federation for the opportunity to play at the tournament.

“They were glad to see us, they missed us, it was felt - an open, calm atmosphere.

We had a big break, after the Olympics I fought in an international tournament for the first time.

I really wanted to fight, to perform, it was interesting to see after such a break whether I added or became worse in some way, ”TASS quotes Taimazova.

Were satisfied with the results of the Grand Slam in the IJF.

According to the director general of the organization Vlad Marinescu, judo first of all proved that it is out of politics.

“The result that this team has shown here is very strong.

It will be great to see judokas at the same level at the World Championships.

The positive is also important.

We hope that judo will become a bridge for friendship and peace,” said Marinescu.