Tampa Bay defeated Colorado in the fifth game of the NHL playoff final, and Russian hockey players became one of the main characters of the meeting. Nikita Kucherov scored the first goal in the series, Mikhail Sergachev scored two assists, and Andrei Vasilevsky repelled 94.5% of the shots and was recognized as the third star. In turn, forward Valery Nichushkin participated in both successful attacks of the hosts and repeated the Avalanche club record for the number of goals in the Stanley Cup final. 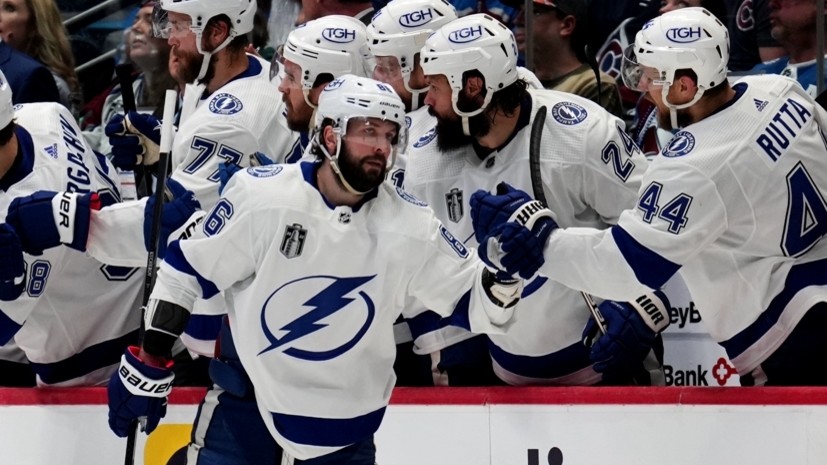 In recent years, Tampa has more than once found itself dangerously close to relegation.

In 2021, she was one step away from losing to the Islanders in the Eastern Conference semi-finals, and this year she lost 1-3 in the series with Toronto.

But each time, John Cooper's wards managed to get together and take the upper hand at a key moment, and each time with a minimal difference in the score.

And in order to keep the chances of winning a third Stanley Cup in a row, they needed to repeat it again in the guest confrontation with Colorado, which, if successful, could put a spectacular end to one of the brightest seasons in league history.

On the eve of this meeting, the hosts had 71 wins in the season, taking into account the regular season and the playoffs.

And another one allowed the Avalanche not only to break the Lightning hegemony and become three-time trophy winners, but also to repeat the record for the number of matches won in a competitive year.

Earlier in the 72s, only three teams took over, and the last time this bar was submitted to the legendary Detroit with the Russian five.

Then Sergey Fedorov and company were stronger than their opponents in 62 championship games, but in the campaign for the Cup they stumbled in the Western Conference finals.

And it was the “Colorado” that were beaten.

And there were all the prerequisites for everything to be decided at the Ball Arena.

In the final, Colorado looked impressive and literally crushed opponents who were tired due to protracted duels with Toronto and Rangers.

In terms of the number of shots, they outnumbered their competitors by a third (114:110), and Andrei Vasilevsky did not act at the usual transcendental level.

Although the statistics were seriously spoiled for him by the second meeting, during which he missed seven times, but it was not only the low percentage of reliability (88.8%).

The Russian has become a little less likely to bail out and concede optional goals, and this, along with colossal bad luck in some episodes.

But it was he who was considered as one of the X-factors in this series.

But the problem was not only that.

The defenders acted uncertainly, the absence of the injured Braden Point was acutely felt, and Nikita Kucherov was hardly satisfied with his performance against the Avalanche.

In the final, he scored three points and at the same time did not score a single abandoned puck, letting Keil Makar go ahead in the scorer race.

And in order to maintain the chances of winning the Conn Smythe Trophy, he needed to confirm the title of one of the best hockey players in the play in the decisive meetings.

Since 2014, he has been ranked second in terms of points in matches when his team was one step away from relegation (19), second only to Evgeni Malkin (20).

But in order to crush such a powerful opponent, the support of other performers was also required.

And one of those who showed their best side was Mikhail Sergachev, who looked rather faded in the series with Colorado.

At the end of the confrontation with the Rangers, he looked impressive and scored three points (1 + 2) in the last two matches, but in the final he was not so bright and only once assisted teammates.

But at a key moment, he pulled himself together and took a direct part in two of the Lightning's goals at once.

At the 16th minute, it was Sergachev who began the attack of the guests, which ended with an accurate throw of his partner in the defensive pair, Jan Rutta.

The Russian made a turn behind his own goal and gathered two opponents at once, after which he passed to the free Corey Perry.

The experienced Canadian expanded the front of the attack and launched a Czech defender into the gap, and the one who had the strength left.

Darcy Kemper showed why he's not yet among the elite of the goaltending industry by allowing the puck to go over the pad.

But already at the beginning of the second period, the hosts managed to restore parity.

Cale Makar's throw was already extremely unpleasant, and the rebound from the hand of Ross Colton completely confused all the cards for Vasilevsky.

The puck went just below the trap and bounced right to Valery Nichushkin, who was waiting for her on a penny.

The Avalanche forward did not miss and scored the fourth goal in the Stanley Cup Final, repeating Joe Sakic's club record.

The equal score on the scoreboard lasted just over three minutes.

The same Makar was sent off for tripping and joined JT Comfer and Alex Killorn on the penalty box, leaving the Lightning four against three opponents.

And they didn't miss their chance.

Kucherov played a simple two with Stamkos, opened right in front of the target and took Kemper by surprise with a powerful click.

Nikita not only opened the scoring in the Finals, but also set the Tampa record for most goals in the majority in the Stanley Cup.

At the same time, in the list of the best Russian playoff snipers, he caught up with Sergei Fedorov (both - 52 each), and only the same Malkin (67) and Alexander Ovechkin (72) are higher.

The Lightning went to the break with a minimal lead, but this hardly allowed them to be calm about the result.

By this point, they had already allowed the Avalanche to disturb Vasilevsky 26 times and it was to be expected that in the final period the hosts would go on the assault.

These fears were fully justified.

Wards Jared Bednar not only immediately went forward, but also quickly achieved what they wanted.

Moreover, the combination was similar to the one that led to the first goal.

Nichushkin provided Makar with a pass and went to push on a nickel while he delivered a wrist throw.

But this time he didn't even have to put the puck into the net.

Eric Chernak, the defender of the guests, helped, from whose skate she treacherously flew between the shields of the Russian goalkeeper.

It seemed that “Colorado” was about to squeeze “Tampa”, but she managed to get together and shock the end of the meeting.

And again, not without the Russians.

Let the cross prevent Sergachev from distinguishing himself, he didn’t leave the ice without a second point.

Six and a half minutes before the end, he participated in a spectacular multi-way combination, which was completed by the Floridians' record holder for game-winning goals in the playoffs, Ondrej Palat.

Cech became the author of the decisive shot for the 12th time and extended the streak to the sixth match.

At the same time, the attack was launched by none other than Kucherov, who single-handedly broke into the opponents' zone.

As a result, it was Palat who was recognized as the first star of the meeting, and the company in the top three was Makar and Vasilevsky.

Despite two goals conceded, the Russian looked more than impressive and saved 94.5% of shots (35 out of 37), demonstrating his usual performance.

This allowed him to win the 30th guest victory in the playoffs, which previously only nine colleagues in the role managed to do.

The leader is the legendary Patrick Roy (63).