“I came to athletics on the advice of a doctor”: Spiridonova - about forced isolation, the task for the season and figure skating

The level of competition in the high jump in Russia tempers young athletes and allows them to go to international competitions without worry, world junior champion Natalya Spiridonova said in an interview with RT. The athlete told why she chose this particular sport, shared her emotions from the track and field debut of Alexandra Trusova and told how she felt after she beat Maria Lasitskene at the Athletics Week in Moscow. 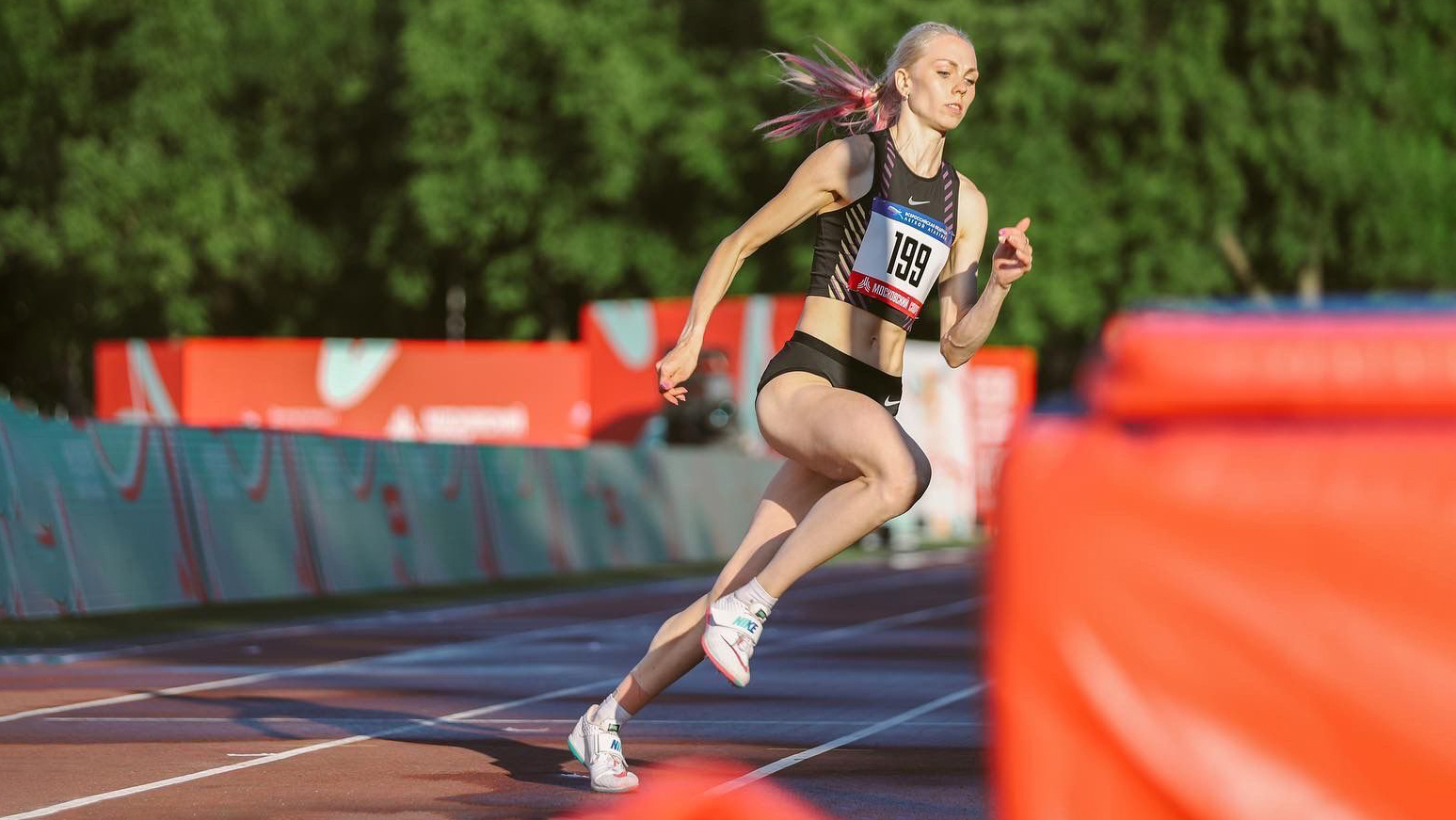 - This year, the track and field calendar in Russia is very busy, since the end of May, several tournaments have already been held as part of the Queen of Sports series.

How do you evaluate your first starts?

Did everything work out as planned?

- I started the season with the third place and the result of 1.88 m at the Russian team championship and in general I am very pleased with myself.

It's great that there was a Week of Athletics in Moscow - two starts in a short period of time.

Thanks to this, it was possible to draw conclusions and improve the results.

It's a little disappointing that the Ignatiev Memorial didn't turn out in the best way.

There I had a good start, the jumps turned out to be technically good, but when the height rose to 1.88 m, I could not cope with a strong headwind.

In general, I really like to perform in Cheboksary, I set personal records at this stadium twice - in 2019 and 2021.

There is some special sector there: you look at the bar - and it seems that it is not high at all.

What is your main goal for this year?

- I want more stable jumps, because with stability comes the result.

And, of course, I want to improve my personal record and fulfill the standard of an international master of sports (1.94 m. - RT ).

In order to be awarded the title, this result must be shown at the national championship, that is, everything must work out at the right time and in the right place.

- At the Luzhniki jumping festival, you not only took second place, but also beat Olympic champion Maria Lasitskene.

Is this something to be proud of?

“To be honest, I didn’t feel this victory in any way.

It's just that Masha did not perform very well, she did not jump very high for herself.

Of course, if the fight had unfolded at altitudes over 1.90 m, then there would have been a different conversation.

And so I showed my result, but she just had a bad day.

So I do not attach much importance to this event, just a working moment.

- Lasitskene is having a hard time with what is happening in the world and the inability to compete in international tournaments.

Does it affect you?

- I try to abstract from what is happening so that it does not interfere either in competitions or in life.

I don’t read anything in particular, I don’t watch anything, I try to stay away.

As for competitions abroad, I can say that for me there was no big difference where to compete.

When you are in the sector, the goal is the same - to jump well.

We have a very high competition in Russia, so at international competitions I had no greater excitement.

On the contrary, I came out confident in myself, because inside the country I went through a good hardening.

It's a shame, of course, that all this is happening in a neutral status.

If we played under our own flag, as a single team, it would be some other feeling.

- But under the Russian flag you have never competed?

The first time I competed at the European Championships in 2019, then we were already under sanctions.

- It passed somehow very quickly for me, and only a few months later I began to realize that I had won it, that this was already a different level and generally very cool.

And then it was the end of the season, the last tournament to which we came with the last of our strength.

And it's good that he turned out so well.

But somehow it didn’t really work out to feel its atmosphere.

Even at the final party, I stayed for a very short time, as we performed on the last day and soon after the competition it was already necessary to go to the airport.

- Do you follow the Diamond League or, like Sergey Shubenkov, have you been “scored” on world sports?

- I don’t watch broadcasts, only the results, and sometimes I review the jumps of some girls.

I think it's great that in such a situation they hold on and perform at a high level.

I always enjoy watching and admiring the jumps of Mutaz Barshim.

He jumps with such ease, air, beautifully.

- Did you come to athletics because you had some kind of idol?

- No, it’s just that this sport was recommended by a doctor when I had minor health problems in childhood.

At first it was a general all-round training: throwing, running.

As a teenager, I ran sprints, later switched to the long jump, and then somehow everything got so twisted that I ended up in the high jump.

And now, for about five years, I have been conquering the bar.

- All this time under the guidance of one coach?

- I now have two coaches: Ekaterina Alekseeva in Pskov and Tatyana Taganskaya in Moscow.

It so happened that I live and train in two regions.

The fact is that a few years ago in my hometown the stadium was in a deplorable state, and there was no arena at all, we worked out in ordinary gyms.

And when the stadium was closed for reconstruction, I had to leave for Moscow.

For about three years I trained in the capital, and when the stadium was built in Pskov, I returned.

- Among the younger generation of athletes, modeling is now, apparently, popular.

Your appearance is also conducive to such activities.

Was there a similar experience?

- It happens that they offer me shooting, but I don’t even pay attention.

While I'm not interested, I now sport in priority.

And there is not much time for filming because of the constant traveling: I rarely stay in one place for a long time.

- Athletes often have their own rituals, superstitions.

Do you have something similar?

- There are no superstitions, but there is a talisman - a bear.

It was given to me by my grandfather when I was still a child, and now it is always with me at all competitions.

They always watch broadcasts, worry about me, support me, rejoice at my victories.

I always try to find time for my friends.

This is important, and it is also useful for sports - sometimes you need to unload your head with something else, get distracted.

Do you have time to follow any other sports?

- Yes, I really like to watch gymnastics - both artistic and sports, as well as figure skating.

When the Winter Olympic Games were held, I was very worried about our girls.

- Recently, there have been discussions among figure skating fans about who deserved the Beijing gold more: Alexandra Trusova with five quadruples or Anna Shcherbakova with the cleanest skates.

Who are you for?

I am for beautiful figure skating, for a fair fight.

The main thing is that all our girls should be at the highest level, and then how the card will fall: whose day will be, who will be more lucky, who will gather their strength and thoughts better.

I think that they are all worthy of the first place and perfectly skate their programs.

- Did you watch Sasha's debut in athletics?

It's so unusual when a person from another sport performs.

It seems to me that she was a little embarrassed, she was shy, she felt out of place.

But it's still great that she's not afraid to try new things.

- Is it not a shame that spectators come to Trusova, and in Cheboksary the tournament was held with empty stands?

I don't pay too much attention to the number of viewers.

No, of course, it's great when there are a lot of fans, but I can't say that it helps or hinders me.

- There were very active presenters at the Luzhniki tournament who turned on the audience and tried to cheer up the athletes.

And sometimes it seemed that such excessive attention was confusing for some.

— I will not speak for everyone, but I had one such moment.

I did not take the height of 1.91 m on the first try, and Dmitry Guberniev included a song where my name sounds.

At such a moment, you understand that everyone's attention is riveted on you, and maybe it even distracted you a little from the jump.

But in sports, you need to be able to cope with this.

Anyway, those competitions were great and cool!