Zeng Fanbo regrets losing in NBA draft: he is still young on the road to his dreams 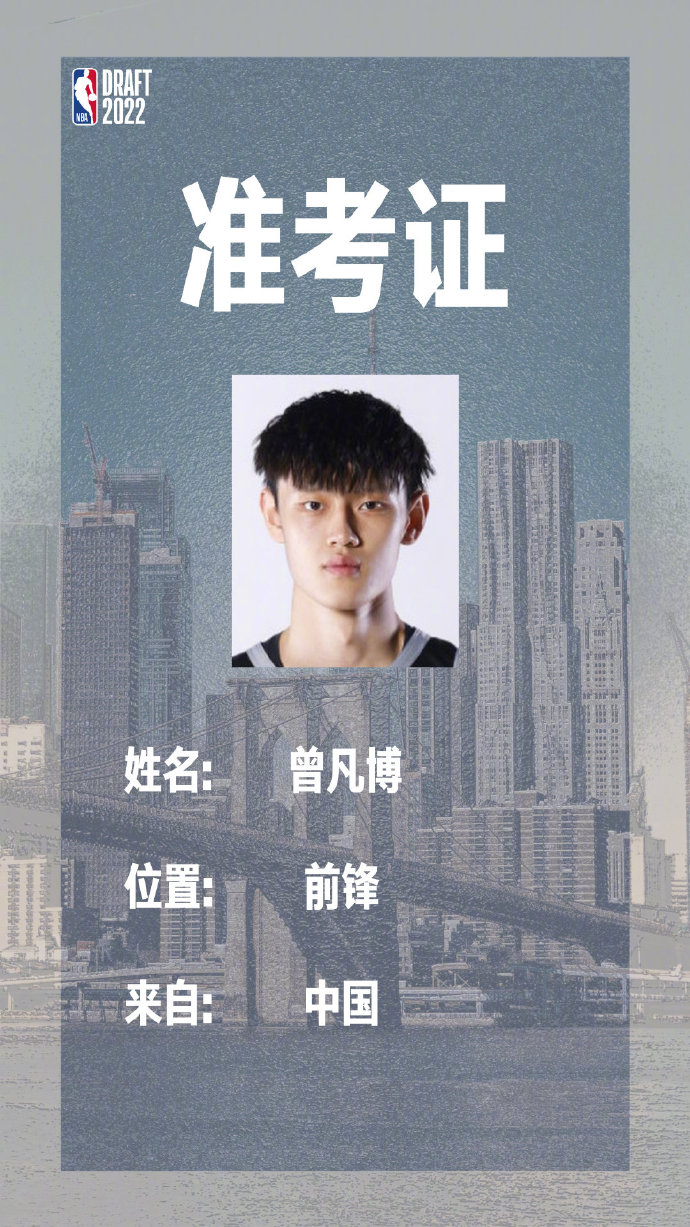 This draft is divided into two rounds, with a total of 58 picks (54th and 55th picks were cancelled).

The No. 1 pick has always been the focus of fans' attention. Unlike some previous predictions, the No. 1 pick Jabari Smith failed to be selected first.

The Magic, who held the No. 1 overall pick, finally chose Paul Banqueiro from Duke University. Known as the "offensive kaleidoscope", he has excellent physical conditions and is very suitable for the style of play in today's small-ball era.

"I don't even know what to say," Banchero said after becoming the No. 1 overall pick. "Honestly, I can't believe what just happened."

At the same time, the performance of Chinese players in the draft has attracted the attention of fans. 19-year-old Zeng Fanbo also appeared at the draft.

Unfortunately, his name was not called in the draft.

Last season, Zeng Fanbo played for the Ignite Team of the American Development League and averaged 5.8 points, 2.8 rebounds, 0.8 assists and 0.5 blocks in 21 minutes of playing time per game.

In an NBA Development League game in March this year, Zeng Fanbo made 6 of 9 shots and 4 of 6 three-pointers, scoring an impressive 17 points.

Although the overall performance of the season is not particularly stable, he has also been trained in high-intensity training and competition.

After the season, Zeng Fanbo had a two-month special training in the United States.

With the increase in muscle lines, he has significantly improved in strength, technique and other aspects.

With his explosive jumping ability and excellent blocking skills, Zeng Fanbo showed his distinctive characteristics on the court.

"Having excellent physical fitness and a wealth of offensive skills that can prove very practical in the NBA," said Zeng Fanbo in a player analysis released on the NBA's official website.

After his excellent performance on the trial training day, Zeng Fanbo got the opportunity to conduct trial training for many NBA teams such as the Pacers and the Kings.

In the meantime, the video clip of Zeng Fanbo's training also appeared in the team's promotional video.

Before the draft, Zeng Fanbo posted two pictures on his personal social media. The inside of the suit he was wearing was embroidered with two five-star red flags.

It can be seen that he is eager to bring the power of more people to the stage of his dreams.

The ideal is full, but the reality is somewhat cruel.

Zeng Fanbo couldn't wait for the result he wanted on this day, but on the road of chasing his dream, his efforts have been seen by the fans.

During the draft process, countless fans swiped to cheer for Zeng Fanbo, and when the dust settled, they also sent encouragement to the young man.

In a previous interview, when it came to the topic of landing in the NBA, Zeng Fanbo said, "If I can play in the NBA, I hope to start from the bench and then become a good backup player."

Although the dream did not come true this time, for the 19-year-old Zeng Fanbo, there are still infinite possibilities in the future.

On the road of chasing dreams, there are always people who are young.

On the journey to the other side of his dream, he can still pour out his own success with sweat.