“Scored more than Ronaldo”: Ovechkin will play for Dynamo football in a friendly match with Amkal

Washington Capitals forward Alexander Ovechkin will become a Dynamo football player for one day. The hockey player will take part in a friendly match between the white and blue team of bloggers, which will take place on Saturday at the VTB Arena in Moscow. According to well-known coaches Andrei Kobelev and Vyacheslav Bykov, Ovechkin's invitation is an excellent move in terms of popularizing football in the country, and their colleague Kirill Novikov is sure that the striker will score several goals. 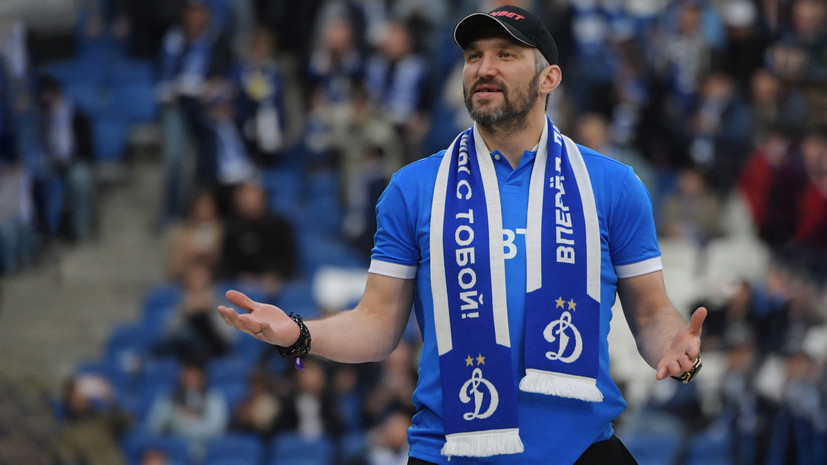 Alexander Ovechkin joined the ranks of athletes who this summer decided to briefly change their specialization.

And on Friday, June 24, football Dynamo announced the signing of a contract for one match with the famous hockey player.

He will enter the field as part of the blue and white for the game with the team of bloggers "Amkal", but not under the usual eighth number, but under the third - as his father Mikhail once did.

“As you know, I love football very much, I have been a fan of Dynamo Moscow all my life.

I had a dream to play for my home club in the starting lineup or just sit on the bench and be on the game as a player.

My dream came true, so see you tomorrow at the match, ”Ovechkin said in a video posted on the club’s official Telegram channel.

According to the new Dynamo head coach Slavisa Jokanovic, the Washington captain will play as a striker, as he has chalked up many goals during his career.

“It will be strange to put him as a defender or a goalkeeper.

I will try to motivate the team as much as possible for tomorrow, everyone will play for 45 minutes, ”the Championship quotes Jokanovic.

Ovechkin is a graduate of Dynamo and one of the most devoted fans of the blue and white.

Arriving in Russia in the off-season, he tries to attend all sporting events where Dynamo players participate.

So, at the end of May, Alexander attended the final match of the Russian Football Cup, in which the wards of the then Sandro Schwartz lost to Spartak.

Dynamo does not hide the fact that the main goal of the upcoming match is to attract an additional audience, since football is part of the entertainment industry.

As for the participation of the NHL forward, the general director of the blue and white Pavel Pivovarov recalled that in Soviet times, hockey players often played football - and vice versa.

“It is enough to recall Vsevolod Bobrov, who took part in the legendary English tour.

Today we have a chance to get one of the most scoring strikers in world hockey - Alexander has more goals in his account than Cristiano Ronaldo.

We hope that in the match against Amkal he will help our team.

We wish him good luck, we want to see him on the field and we really hope that this match will be the first for him, but not the last, ”Match TV quotes Pivovarov.

The opinions of experts about the upcoming show match were divided.

Some believe that such events have a positive impact on the development of sports, attract the attention of fans and attract children to sports sections, while others do not see the point in them.

So, the former Dynamo coach Andrei Kobelev called the upcoming game a good move in terms of PR.

If there is an opportunity to make some kind of hype, to hold a friendly match, why not?

I know that Alexander loves football very much, ”said the specialist.

In turn, the former head coach of the Russian hockey team, Vyacheslav Bykov, noted that any actions by eminent athletes give positive dynamics and encourage people to go in for sports.

And Vyacheslav Fetisov said that Ovechkin can afford to play in any sport, the main thing is to avoid injuries.

“It's just a show that should be treated accordingly.

They play with bloggers, so everyone just runs around and enjoys it.

I think, as it usually happens with us, he will score a couple of goals and be happy with it, ”Sport-Express quotes Novikov as saying.

And the ex-striker of the Russian national team Dmitry Bulykin suggested that in the Saturday match the famous athlete would play not as an attacker, but as a goalkeeper.

“It will not be difficult for Ovechkin to switch from hockey to football.

He plays well in goal.

I wouldn't be surprised if he concedes just one goal.

He's okay with his reaction and hands.

It's hard for him to score.

This is a great step to popularize football and Dynamo,” said the former football player.

Among those who did not appreciate the Dynamo idea too highly was Sergei Silkin.

He said that the levels of the teams are different, like heaven and earth, so there is no need to talk about any kind of sports component.

“Want to get attention?

Yes, some kind of unusual action.

It is clear that Ovechkin needs training to prepare for the championship, you can move somewhere.

It's more of a show than a real sporting event.

If Dynamo concedes, it will be clear - this is a fixed game.

I don’t know what the point of a match is other than to put on a show,” Silkin said.