NBA basketball: Christian Koloko, the young Cameroonian who wants to make a name for himself

After three seasons at the famous University of Arizona, Cameroonian pivot Christian Junior Koloko is the African hopeful who should be chosen the highest during the 2022 recruitment session... 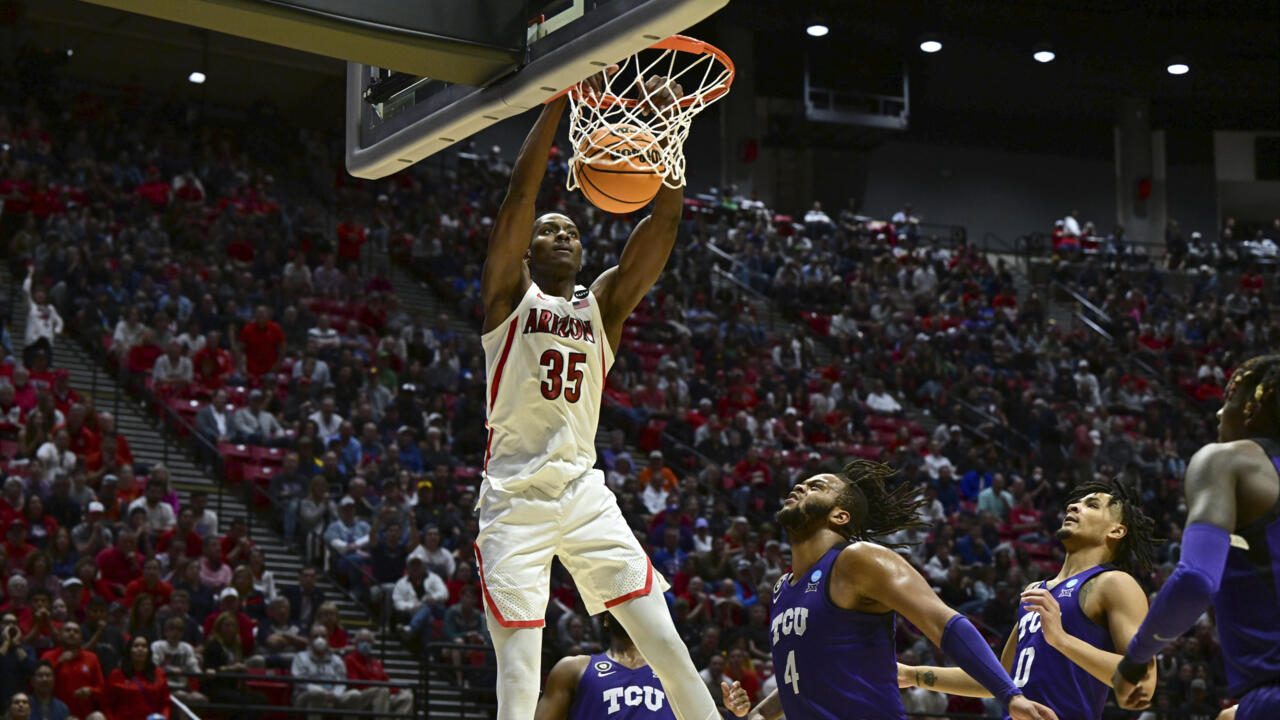 NBA basketball: Christian Koloko, the young Cameroonian who wants to make a name for himself

After three seasons at the famous University of Arizona, Cameroonian pivot Christian Junior Koloko is the African hope who should be chosen the highest during the 2022 recruitment session (Draft) of the North American Basketball League (NBA). ), which will take place on the night of June 22-23 in Brooklyn.

A player with an unusual career, the native of Douala wishes to follow in the footsteps of his compatriots who are already NBA All Stars, Pascal Siakam and Joël Embiid.

, the NBA concludes this exercise with the traditional

high mass of the Draft

, this evening, in Brooklyn.

Of the 250 candidates and suitors, very few will be elected.

league in the world.

Rapid growth pushes him towards basketball

Among the hopes ("prospects") who will be called quickly to go on the stage and pose with the cap of their future team on the head, the Cameroonian Christian Junior "CJ" Koloko, the star pivot of Arizona, who comes out of a sublime season with the best university team 2021-2022 (34 wins, 3 losses only).

We are only a few hours away from the big night, and I feel a little pressure, because I can't wait to find out where I'm going to play next season

But I worked hard to get there, and I can touch my dream with my fingertips

Born in Douala, Koloko started with football before quickly moving towards basketball at the age of 12, due to a strong growth spurt (he went from 1.65m to 1.89m in 18 months!) .

After a few training sessions, he feels that the passion for the orange ball is growing, but still does not think of a future as a top athlete, he who has always been a brilliant student.

I was very focused on school, and I wanted to be a very good student before thinking about sports

Requested by the prestigious Stanford, Princeton and Harvard universities

The young Indomitable Lion is progressing on the fields visibly, and in 2017, he receives offers to go to the United States and thus do sport-studies in a high school in California, at Sierra Canyon School.

The young Koloko does not speak a word of English, but who cares: he wants to take advantage of this opportunity and is working hard on and off the pitch.

The work pays off, and after a year and a half, he receives offers from major universities such as Arizona, California, and Vanderbilt, but also from the most prestigious in the country such as Stanford, Princeton and Harvard who are seduced by his brilliant academic career. .

I chose Arizona because the basketball tradition of this university as well as the quality of the lessons offered to me there quickly seduced me.

have been through here, so the choice was the best for me

During his first two seasons, the Cameroonian interior did not really have the opportunity to shine, he who is used irregularly.

But with the arrival of Tommy Lloyd in the summer of 2021, one of the best technicians in the country, the situation for number 35 changes radically.

The one nicknamed the Albatross, because of his size (2m18) and his gigantic wingspan (2m32!) takes advantage of the appointment of the new staff to settle in the five majors of the team and does not delay to explode in the university championship (NCAA).

He went from averaging 6 points and 3 rebounds to.…18 points and 10 catches per game, and took his team to the quarterfinals of March Madness, the annual NCAA tournament and one of the best platforms for kicking the ball around. eye of NBA teams.

The Cameroonian Christian Koloko impresses and dissuades on the packages thanks to its dimensions.

He is elected in the best five major of the season for the teams of the western half of the country.

It was then that he decided to take it to the next level, and signed up for the Draft.

After three years at college, I think I have figured it out, and my dream of going to the NBA is there, right in front of me, and thus join my compatriots Pascal Siakam, who is also from Douala. , and Joël Embiid, in order to give Cameroonians one more reason to be proud, seeing that another child of the country arrives in the best league in the world

", affirms the one who also managed to obtain his diploma from Master with...two years in advance.

The comparison with Embiid is frequent, and Koloko feels privileged to receive pivotal advice from the Philadelphia Sixers, a big brother who has lived almost the same journey as him: “

He tells me to give everything, to show what I am capable of. and that everything will be fine.

What interior would not like to receive advice from Joel

He's the best center in the league!

Tonight, Koloko, whose rating continues to climb on the predictions of Draft experts, will know what his next step will be, and will enter the NBA through the front door without forgetting the path taken: “

When I look in the rear view mirror, I tell myself that I have made a lot of sacrifices, but that it is really worth it.

Coming from where I come from, me, the child of Douala, and being at the gates of the NBA, I tell myself from time to time that it's just incredible.

But I take nothing for granted, I am proud to be an African and Cameroonian representative at the highest level and I want to make my compatriots proud.

I have Cameroon in my heart, in my soul.

I'm happy to be taking another step in my life's journey, and I'm excited about what's next.