“I didn’t breathe for two minutes”: how the coach saved the American synchronized swimmer who passed out in the pool at the World Cup

American synchronized swimmer Anita Alvarez collapsed during her free program in the solo competition at the FINA World Aquatics Championships in Budapest. She was saved by coach Andrea Fuentes, who jumped into the pool faster than the rescuers and lifted her ward from the bottom. The girl did not breathe for two minutes, but then she regained consciousness and is now preparing for the final of the team tournament. It's not the first time Alvarez has fainted during performances. Last year, she became ill at the qualifying competitions for the Olympic Games in Tokyo. 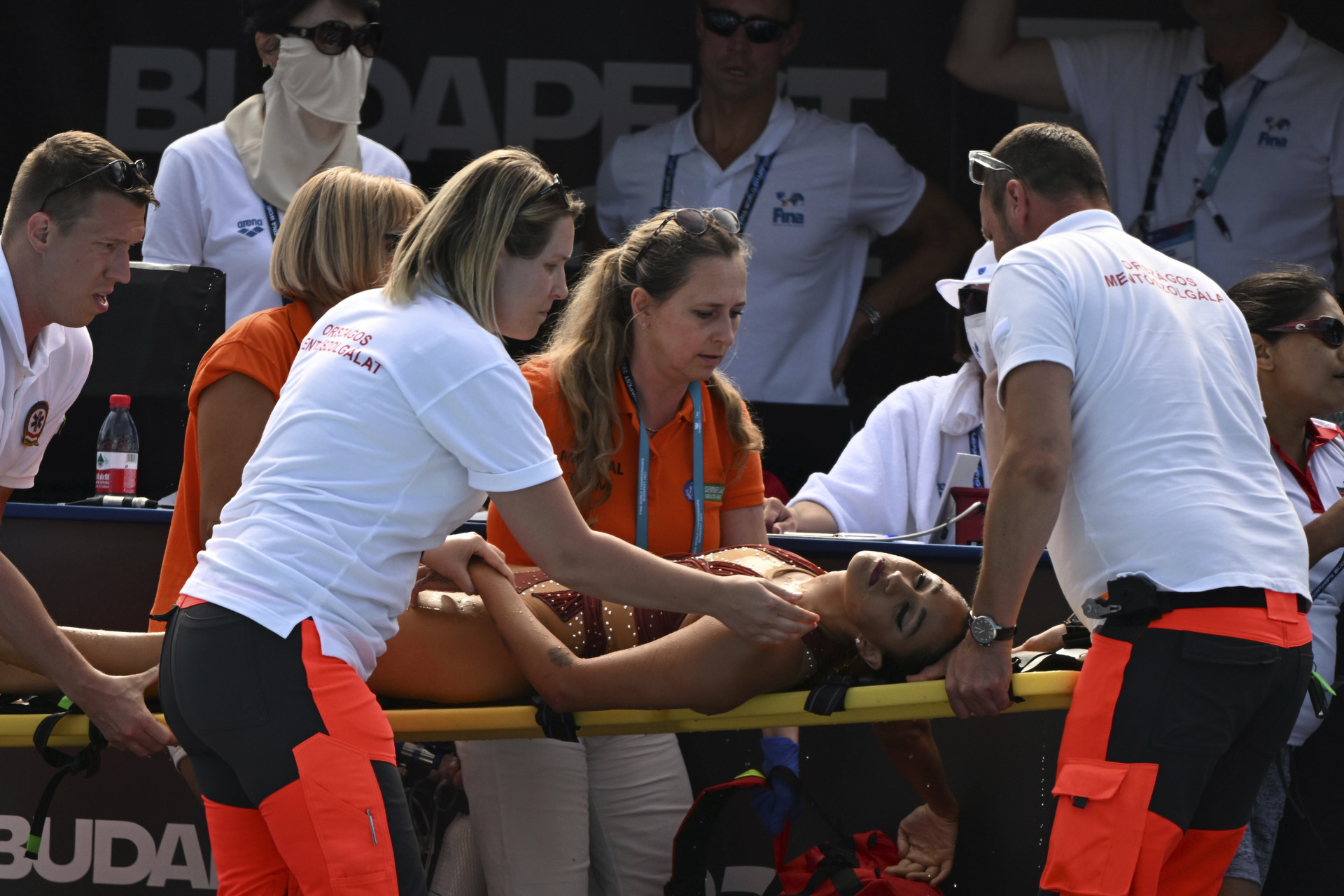 Fans are so accustomed to enjoying great performances in synchronized swimming that sometimes they forget that this is a sport and it is associated with an incredible load.

I was reminded of this incident at the World Championships in Budapest, which almost ended in tragedy.

It all happened at the competition of soloists on Wednesday, June 22.

During the performance of her free program, American Anita Alvarez suddenly lost consciousness - the girl began to slowly sink into the water.

At first no one understood what was happening.

The coach of the athlete Andrea Fuentes began to worry about the ward, because she was under water for too long, and called for help.

Not seeing any reaction, the three-time Olympic silver medalist in the Spanish national team rushed to Alvarez.

By this time, the girl had already managed to sink to the bottom of the pool.

I said something was wrong, shouted to the rescuers - asked to climb into the water, but they either did not hear me, or did not understand.

I swam up to her as fast as I could, as if it were the finals of the Olympics.

When I pulled her out, she was not breathing, and her jaw was tightly clenched, ”the coach said in an interview with AS.

Fuentes lifted the athlete to the surface, and only after that one of the men came to her aid.

Together, they pulled the girl out of the water, put her on the edge of the pool, after which the rescuers began to bring her to her senses.

“Water was flowing from Anita's mouth, but she was still not breathing.

Having pulled her out of the water, they put her on her back, and I turned her over on her side, since it was impossible to breathe in that position.

She did not breathe for two minutes, and with a pulse of 180 beats per minute, this is highly undesirable.

At some point, I was really scared for her, but now we are laughing together at this story, ”added the Spaniard.

According to the coach, the cause of the faint was Alvarez's overexertion during the performance, as she wanted to show her maximum.

For the 25-year-old American, this was the third world championship, and this time one of the best synchronized swimmers in the United States had the opportunity to finally win a medal.

As a result, Anita brought herself to the limit of her physical abilities, and the body could not cope with the load.

“Sometimes we forget that this happens in other sports requiring high endurance: marathon running, cycling, cross-country competitions ... We all saw footage of how athletes went from a distance to the finish line, and others helped them to get him.

Our sport is not fundamentally different from the rest - it's just that all the action takes place in the pool.

We push the limits of human capabilities, and sometimes we run into them.

Now Anita feels good, and the doctors also say that she is all right, ”the coach explained.

Interestingly, this is not the first time Fuentes saves his ward.

Last year, at the qualifying tournament for the Tokyo Olympics, which was held in Barcelona, ​​Alvarez also passed out in the pool.

Then she demonstrated a free program in a duet with Lindy Schroeder.

Fuentes understood from the movements of the athlete that she needed help.

Then she also jumped into the pool and pulled the American out of the water.

At that time, Karen, Anita's mother, explained what happened as an overexertion and said that this had happened to her daughter before due to lack of sleep or lack of time to recover from training and performances.

According to her, the daughter passed various tests, trying to figure out the causes of fainting, but the tests did not reveal any health problems.

Anita Alvarez intends to continue participating in the World Championships in Budapest.

According to the coach, the girl will rest all Thursday, and on Friday, June 24, she plans to compete in team competitions.

According to Fuentes, before making a final decision, the coaching staff will consult with doctors.