“This cannot be supported”: will the Ukrainian athlete Petrenko be punished for demonstrating the symbols of “Azov”

Ukrainian Diana Petrenko unfurled the national flag with the symbols of the national battalion "Azov" during the awards ceremony at the youth boxing tournament in Hungary. The athlete removed the cloth only after the second demand of the organizers. However, this act did not cause any reaction either from the European Boxing Confederation or from the International Association. In Russia, they were outraged by double standards: gymnast Ivan Kulyak was disqualified for demonstrating the letter Z on his uniform. 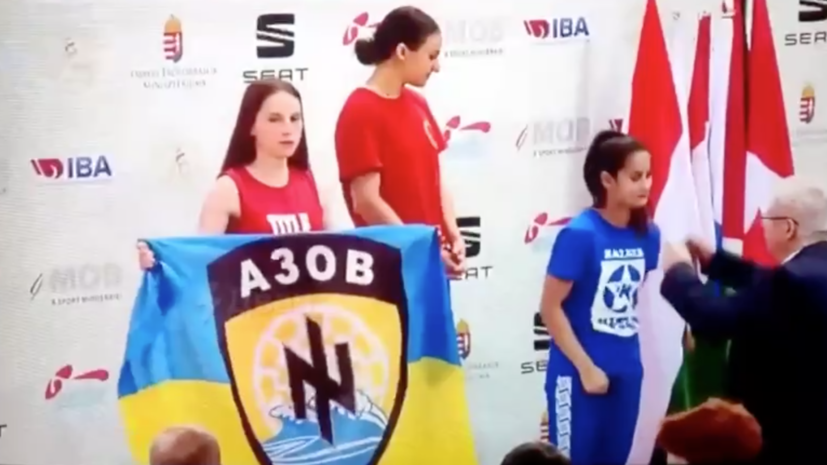 The international youth boxing tournament “Gergely Bornemissa Memorial”, which took place on June 7-11 in the Hungarian city of Eger, ended in a scandal.

On the final day of the competition, Ukrainian Diana Petrenko, who won second place in the weight category up to 50 kg, unfurled the flag of Ukraine with the symbols of the Azov national battalion at the awards ceremony.

At first, the organizers did not react in any way to what was happening and even handed the girl a medal, but a little later one of the representatives of the organizing committee approached her and said something.

Petrenko nodded, folded the cloth for a while, but then unfolded it again.

This was followed by a new remark, after which the girl no longer showed the flag.

As it turned out later, Petrenko is training with one of the commanders of the Azov Battalion, Dmitry Kukharchuk, as he himself reported on social networks and published a video from the awards ceremony.

This episode is not in the official YouTube channel of the tournament.

Russian athletes could not compete in Eger, as they were suspended from international tournaments.

The International Boxing Association (IBA) and the European Confederation (EUBC) did not respond to RT's request for possible sanctions against Petrenko, while the Russian Boxing Federation declined to comment.

In Russia, Petrenko's trick was met with indignation.

So, State Duma deputy Dmitry Svishchev called on the leadership of boxing organizations to abandon double standards and punish the athlete by analogy with the Russian Ivan Kulyak.

Recall that the athlete was disqualified by the International Gymnastics Federation for a year for demonstrating the letter Z on the form during the awards ceremony at the World Cup in Doha.

His act then was largely provoked by the Ukrainian participants, who insulted Russia, said nasty things to the athletes, and also demanded that the entire team be removed from the competition.

In addition, they went to the platform wrapped in their national flags, which is prohibited by the FIG rules.

However, neither in that case, nor after Petrenko's trick, no disciplinary punishments followed.

“The athlete tried to go to the award ceremony with the flag and the image of an organization that is recognized as banned in many countries,” TASS quotes Svishchev.

- And no reaction, although this is a direct violation.

It is not clear why condemnation and sanctions do not follow - such things need to be punished.

Whereas our gymnast Kulyak was severely punished for what they consider to be a violation of ethics.”

According to the Olympic speed skating champion Svetlana Zhurova, the Ukrainian athlete "positioned herself in a certain way", regardless of what goals she pursued.

“If she believes that Azov is good and something to be proud of, then this is very sad.

This cannot be supported.

Although, maybe she, of course, is not very educated and does not understand what is behind this symbolism ... Or she is just a supporter of Nazism, then there is nothing to talk about, ”said Zhurova RT.

The Olympic champion doubted that any sanctions would be imposed on the Ukrainian by international boxing organizations, because after the remark she folded the flag, thereby eliminating the reason for possible proceedings.

“I think the fact that she was asked to remove the flag was already such a reaction.

Now, if she refused, began to resent, then some sanctions could follow, ”said the former athlete.

Also, according to Zhurova, in this situation one should not draw an analogy with the disqualification of Kulyak, because in his case the rules were violated.

However, the punishment that followed, one way or another speaks of an unfair approach to the Russians.

“The form is agreed long before the competition, and if something appears on it, then the federation has the right to apply various sanctions to the athlete.

Of course, the person just wanted to support his country, but, unfortunately, this cannot be done.

If he, like Petrenko, had been reprimanded and removed the sign from the form, then most likely there would have been no consequences.

But, alas, all this went further, and they applied to him those measures of punishment that they considered necessary.

Although earlier, most likely, he was not disqualified, but simply would have been fined.

But now times are different, ”concluded the interlocutor of RT.