Tchouaméni, Bale's 18, a perfect Castilian and the interest of PSG: "I told Mbappé that I was going to Madrid and he was happy"

First day for Aurélien Tchouaméni (Ruan, 2000) at the Ciudad Deportiva de Valdebebas. The fourth most expensive signing in the history of Real Madrid, after Eden Hazard, Gareth... 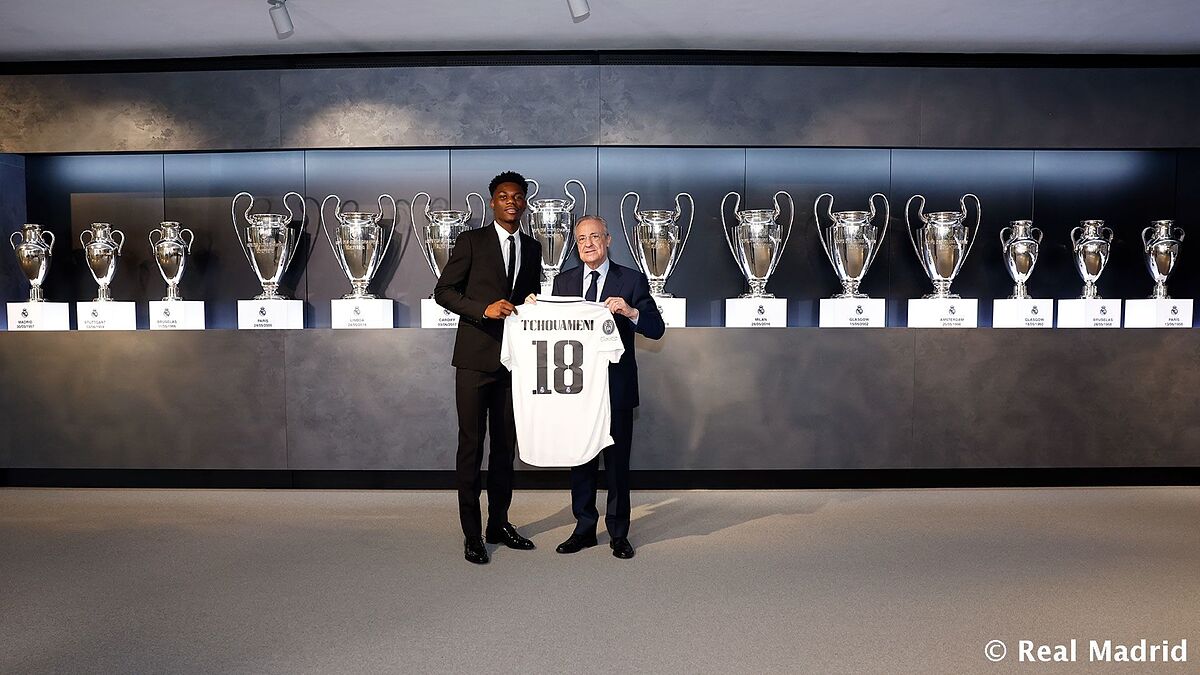 in the history of Real Madrid, after

, he signed his six-year contract, posed with a replica of the

in the background and stamped his name on it.

of the next course shirt.

, who underwent a medical examination at the Sanitas La Moraleja University Hospital first thing in the morning, will inherit the last number

, for whom the white team has paid

plus some variables that could raise the price to 100, stepped onto the grass of one of the fields attached to Di Stéfano and received the affection of

, who finally won the battle for him against

"You had the opportunity to choose, and you have chosen this badge", recalled Pérez, who has insisted on this message: "You are fulfilling your great dream", he assured, focusing on the Fifteenth European Cup: "

Madrid does not stop in complacency

, we want more and we all think about the fifteenth. That's now the big dream."

Tchouaméni went up to the altar of Valdebebas after Florentino's "

" and with the people already activating the translators, but he surprised the public by giving a speech in

"Hello everyone, I am very happy to be here to start my story at the best club in the world, very happy.

We are going to work hard

to win more titles for this club. Thanks to the president, my agent and my family for being here Hala Madrid", he concluded, short but sincere.

"Karim wrote to me right away"

Before the press, introducing himself with a smiling "'Hello!", Tchouaméni

explained the details of his signing

, the fight between Madrid and PSG for him, the messages from

when the agreement was made official and the attempts to

for convincing him to sign with the Paris team.

"As soon as I found out that Madrid was interested, I didn't hesitate. I want to leave a mark on football history, and the best football team is the best to achieve it. A team with values".

he explained about his choice, to which he later added: "

I had already spoken with other teams, but in my head I was waiting for the call from Madrid

And when she did, I didn't hesitate for a moment.

Talk to my family and agent to find the best deal.

Being here is wonderful."

On the importance of having compatriots like Benzema and Camavinga in the locker room, the midfielder explained that "

Camavinga and I spoke quickly

when everything began to be reported in the press. In his case, seeing how he has improved in the best team in the world and He is very happy. Karim is the best striker in the world, I am lucky enough to play with him in France and I am looking forward to starting.

Karim wrote to me when it became official

, he told me how everything worked and if he could help me in any way. lucky to have them at the best club in the world".

He also spoke with

, who is a friend and teammate in the national team and who, after his renewal with PSG, has tried to convince him to sign for the Parc des Princes club: "He decided to sign for PSG and wanted to know if I wanted to play at PSG. I

told him I was going to go to Madrid, he understood and was happy