Sharjah with Cosmin «does not lose»

This season, the ranks of Sharjah witnessed a great positive move, after the Romanian coach Cosmin took over the leadership of the team, who led the team to win 14 matches, drew in three, and did not lose any confrontation in 17 matches in the ADNOC Professional Football League. 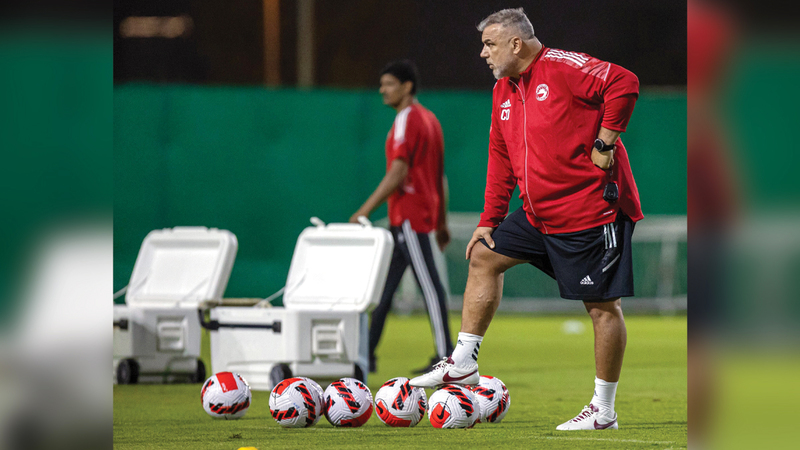 He outperformed Al-Ain, Al-Jazira, Al-Ahly youth and Al-Nasr..and competed with "Al-Zaeem" for the title

Sharjah with Cosmin «does not lose»

This season, the ranks of Sharjah witnessed a great positive move, after the Romanian coach Cosmin took over the leadership of the team, who led the team to win 14 matches, drew in three, and did not lose any confrontation in 17 matches in the ADNOC Professional Football League. He won the title, and during the reign of his Romanian coach, Sharjah regained its true image and strong personality as one of the strongest and best teams in the league, and the "King" is close to winning the President's Cup, after qualifying to meet Al Wahda in the final match.

On the other hand, Al-Sharqawi will not forget that the former coach of the team, Abdulaziz Al-Anbari, who left his big mark on the Al-Sharqawi team, after he put Sharjah on the right track, and brought him back during his tenure to the track of championships and titles again after a long absence from the podiums, as he led him to win the league title. Well-deserved and powerful in 2019, he also won the Super Cup title at the expense of Al-Ahly youth.

Although Cosmin coached the Sharkawy team since the tenth round, succeeding Al-Anbari, he managed to force the team back to the fore, and regain the hero's personality again.

Sharjah won during the era of coach Cosmin in the second round of the league against the big teams, such as Al Ain, Al Wahda, Al Jazira, Shabab Al Ahly and Al Nasr,

Cosmin succeeded in bringing the Al-Sharqawi team back to the top strongly, and it seemed a strong competitor to Al-Ain, after its ranking in the league was significantly lower, as Al-Ain competed for the league title until the last rounds, before Al-Ainawi won the title with 65 points, 10 points behind Sharjah, who finished In second place with 55 points.

The team's match against Al-Nasr, which Sharjah lost by three clean goals, represented the last stop for former coach Abdulaziz Al-Anbari with the team. Al-Anbari led Sharjah in seven league matches, won four and lost in three, while assistant coach John Fornos led him in two matches against each of Al-Uruba. It tied 2-2 in the eighth round, and against Al-Wehda in the ninth round, in which the team lost by three clean goals.

Cosmin started his career with Sharjah last November, and the team's match against Khorfakkan was in the tenth round of the ADNOC Professional League, which Sharjah won 3-1, his first official appearance with Sharjah.

Salem Hadid: The coach gave the players confidence in themselves

The former international player in the national team and the Sharjah club and legal advisor Salem Hadid confirmed that Sharjah was afraid of his competitors and gave them more than their size, but when Kuzmin took over the team coach, everyone saw a different team, as the coach restored the hero's personality to the team and gave the players confidence in themselves, stressing that Kusmin is distinguished Courageous and good at reading teams and matches.

Salem Hadid told Al-Emarat Al-Youm: "Any coach, whether Cosmin or others, if he has the courage and desire to win, Sharjah has the capabilities and tools that can connect him with evidence that the team in the era of Cosmin won 14 games and did not lose in the league, This indicates that Sharjah has the ability, but the fear, the way of playing and the failure to exploit the potential of the players affected the team.”

He defeated Ittihad Kalba with a clean goal in the first round.

He defeated Al Dhafra 1-0 in the second round.

They beat Al Wasl 3-2 in the third round.

He lost to Shabab Al-Ahly 3-4 in the fourth round.

He beat Al Jazeera 2-1 in the fifth round.

He lost to Ajman with a clean goal in the sixth round.

He lost from Al-Nassr 3-0 in the seventh round.

Sharjah results with Cosmin in the league