“The result is the measure of everything”: Ter-Avanesov on the motivation of athletes, the interest of children and preparation for the Games in Paris

Suspension from international tournaments does not prevent athletes from competing with foreign rivals in absentia, because you can always compare the results. This was stated in an interview with RT by the honored coach of Russia Evgeny Ter-Avanesov. He also spoke about the prospects of his pupil Maria Privalova, the daughter of the Olympic champion, acting head of the VFLA Irina Privalova. In addition, the specialist explained why in recent years the national team has not received constant support from high-level athletes, despite the high interest in the sport among children. 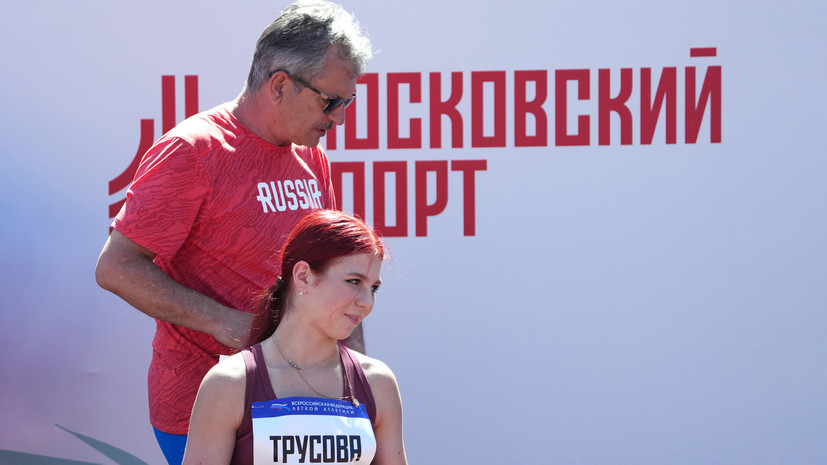 - At the Athletics Week, you acted in a somewhat unusual role for yourself - you became a temporary coach-consultant for Alexandra Trusova, who first tried her hand at athletics.

But besides Sasha, you had a full-fledged landing of pupils in Luzhniki, didn’t you?

- Yes, of course, a lot of guys performed.

I have now rejuvenated the composition of the group, I work mainly with athletes born in the early 2000s.

We are preparing with them for the Olympics in Paris, if, of course, it takes place for us.

This is Masha Privalova and Anton Buldov.

They are already winners and prize-winners of the national championships among youth and juniors.

Today there are 6-8 people in the group with good future prospects.

And, of course, Daria Nidbaikina is an adult athlete who won both the Znamensky Memorial and the competition on the themed day of jumping.

That is, this is such a fusion of experience, including me as a coach, and youth, which, I hope, will bring worthy results.

- Have you encountered motivation problems with your wards, taking into account the situation in which Russian sports now find themselves?

- Athletics in this sense is a very good sport, as results are measured in it, and they can always be compared.

For example, Sasha Trusova entered the sector for the first time, jumped 3.80 meters.

She was given a second attempt, and she "flew" even further.

And in the third, and in the fourth, she added all the time.

And this excitement, the desire to become better and better, attracts both children and adults.

Great athletes, of course, are motivated by meetings with foreign rivals, the Olympic Games.

And it is right.

But at the same time, the numbers on the scoreboard are still the measure of everything.

Ilya Ivanyuk at the Znamensky Memorial overcame the bar at a height of 2.34 meters.

This is the best result of the season in the world, which was shown at what competitions?

Does the financial question play a role here?

- If money comes to athletics, and the guys start to receive appropriate dividends for their work here, in Russia, as happens at commercial competitions in Europe or America, this will also become the basis for growth.

But the main thing, in my opinion, is my own achievements.

After all, sooner or later everything will change, we will return to the world stage, and we need to be ready for this in order to go out and win again.

- Maria Lasitskene, speaking about the creation of a series of starts "Queen of Sports", expressed the opinion that this undertaking was belated, and such tournaments should have been organized five or six years ago.

Do you agree with her?

Yes, and in 2015 and 2016, when we fell under this pressure, we still had international competitions in one form or another.

Now the alignment is different, and we adapt to it.

But, I repeat, in any situation you need to remain strong.

And we have shown that we can actually hold good competitions.

In my opinion, the result is a product that can be sold today.

In the regions, the same needs to be organized.

On June 12, the athletes and I will perform in Tver at excellent competitions that will be held right on the square in the city center.

And this is a great way to promote.

As many children as possible should come to these competitions, and then to the sections.

- And now the children do not go to athletics?

“Children are coming, you don’t even know how.

We are fine with children.

At the youth championships of the country for children under 18, records are constantly recorded in the number of participants.

Sometimes, 800 people came, but these are the best, those who passed the selection.

But then they all need to be kept in sports, and here problems arise.

We lose a lot of athletes during the transition from youth to juniors, and then to youth.

They don't make it to the team.

In my opinion, these children should be given more attention and support, they should be the property of the state, if you like.

This is our gene pool, our future.

Therefore, now there are proposals to hold national championships for children of an earlier age, not from the age of 16, as it is now, but already at 14-15.

By the way, here, at the Athletics Week, competitions were organized for this age category, and this is very cool.

Even Belarusian children came to us.

Until the age of 15, they have the right to play with us, and then sanctions apply due to the suspension of ARAF membership in World Athletics.

- When you listed your athletes, the name of Maria Privalova attracted attention.

Is this the daughter of Olympic champion Maria Privalova?

Are you preparing her to perform at the Paris Games?

- When preparing an athlete, we always focus on competitions of the highest level.

By Paris, Masha will be 23 years old, and we, of course, would like to get to the Olympics and perform successfully there.

Privalova has already participated in the Youth Olympic Games in Argentina, she became the third there.

But now she is studying at Moscow State University, and this leaves its mark on the preparation.

It is very difficult to study and train at the highest level, it is a big burden on the body.

But you need to go through this period, endure it, and then completely switch to professional sports.

Masha's motivation is very high, which is understandable, because her mother is an Olympic champion.

- At the Znamensky Memorial, Maria did not manage to get into the top three ...

- Today's results should not be misleading: it will progress, everything will be fine.

I am not a supporter of forcing preparation.

Adult sports begin at the age of 21, and by this moment you need to come prepared in all respects - physically, psychologically, intellectually.

She is a very talented person, she has an inner core, and she really wants to achieve great heights.

She is fast, like a mother, but at the same time she cannot express herself on the track.

Psychologically, she gravitates more towards six attempts than a single race.

- Is the competition within the country good in the triple now, does it allow you to progress?

“We always have competition.

Jumping is a kind of growth point in Russian athletics.

The greatest achievements in recent years have been shown in these disciplines.

Here we have a school and people with the ability to this kind of activity.

Kenyans are sharpened for a long run, and the best sprinters are mostly Americans.

Jumping combines strength with speed, and we are strong in this.

- This year, thanks to the Queen of Sports series, the track and field calendar is very busy.

Are you planning on making the most of it?

Many took it somehow wrong: here, they say, they will have to perform all summer.

But we have a summer sport!

And when there are tournaments that

this year they are also paid, so it’s definitely not worth sitting idle.