On September 9, Luka Modric (Zadar, 1985) will celebrate his 37th birthday in the sports city of Valdebebas, the tenth consecutive wearing the Real Madrid shirt... 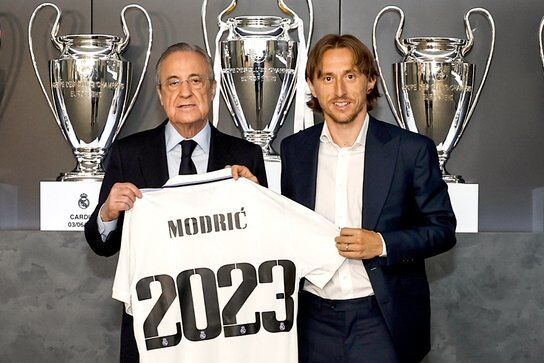 (Zadar, 1985) will celebrate his 37th birthday in the sports city of

, the tenth in a row wearing the

shirt , which today announced the renewal of the Croat's contract until June

It was an open secret for months and it only remained to wait for the end of the season to make it official.

of Chamartín's '10' contract has materialized after a sensational season, one of the best in Modric's career.

He has appeared in

and has racked up

, the latter being his best assists since his last season at

before returning to the concentration of his team, which played against

on Monday and this Friday faces

This Friday will be Modric's penultimate match of the season, which will put the

on next Monday, again against France.

There he will face

again , a partner on a dream trip to the

of his) and the

In all three titles the Croatian has been essential.

In the domestic championship he has added

, 25 of them as a starter, has scored two goals and has distributed eight assists.

In the European Cup, he has been the axis of the comebacks against

, for his part, he scored the winning goal in the final against

, he was the sixth outfield player with the most minutes (3,435), behind

to continue at Real Madrid and continue wearing this shirt. I have the

to continue giving everything and winning trophies. Thank you very much for your love and Hala Madrid", declared the player.