Cupra aims to sell 500,000 cars by the middle of this decade

Seat has bet everything on the Cupra brand, with sportier overtones, and four years after its presentation at Terramar, it has returned to this mythical circuit from the beginning of the... 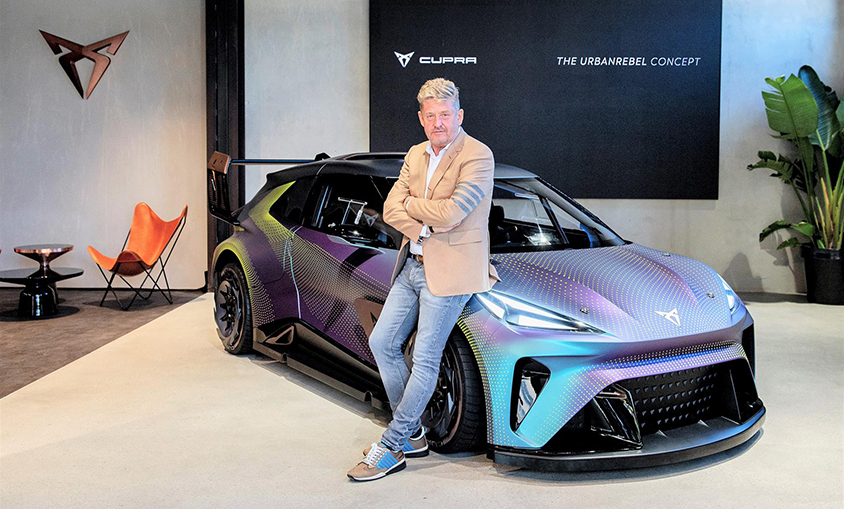 Seat has bet everything on the Cupra brand, with sportier overtones, and four years after its presentation at Terramar, it has returned to this legendary circuit from the early 20th century to explain

The first thing will be to expand its range with three more models until the year 2025.

The calendar is set with the launch

and that it will be done at the Audi factory in Hungary.

It will be a derivative of the Audi Q5 Sportback, and it will be 4.5 meters long, it will be above the Formentor in size and it will have combustion or plug-in hybrid versions with 100 kilometers of electric autonomy The Terramar will be the last model with a combustion engine that will present Cupra, according to Griffiths.

That same year, the Cupra Tavascan will arrive

, which will be made in Germany and will be 100% electric.

Finally, in 2025 the jewel in the crown will land: the UrbanRebel,

the small urban of the sports brand of Seat.

Wayne Griffiths, Cupra skipper, with the first prototype of the UrbanRebel

Key model in the brand

The latter is key because it

will be the first of the three versions -the others are the VW ID.2 and a Skoda- that will be made at Seat Martorell as part of the electrification project for the Spanish factories of the Volkswagen group in Spain

(Martorell itself and VW Navarra in Landaben).

To this must be added the implementation of a battery factory in Sagunto, with a total investment by the German group of 7,000 million.

2025 will be the year in which the brand also renews its current models: the Ateca, the León, the Formentor and the electric Born.

If the data is correct and according to the company's forecasts, the

5,000 million turnover would be reached already this year, more than double the 2,200 million it obtained in 2021.

According to Wayne Griffiths, executive president of Seat SA, "Cupra is going to reach to

half a million units sold in the medium term».

Almost half of the 200,000 Cupras sold to date are from the Formentor

This term would be the middle of the decade, since

In its four years of life, the brand has exceeded 200,000 cumulative deliveries.

With the merit that almost half of them have been from its first 100% model born under this banner, the Formentor.

If this progression continues, by the middle of the decade the goal of selling half a million units per year could be achieved.

This would be a boost for Seat's turnover and its profitability.

In the first sense, it must be taken into account that the average income per car of Seat SA (including the Seat and Cupra brands) has risen 18% annually in recent years;

The progression of Cupra would make said ticket grow above 25,000 euros.

If this average rate were achieved in 2025 and 650,000 cars were sold between Cupra and Seat, the company would invoice 16,250 million that year.

The street UrbanRebel will be very similar to this second evolution of the project.

Everything also goes through international expansion.

Beyond the irruption in Israel and Australia, (a Cupra Garage will open in Sydney next month)

the quantitative leap has to come from the US market.

In this country, where the Volkswagen Group is forced to manufacture electric cars and where the reputation of the VW brand continues to be affected by the dieselgate, Cupra would be an alternative to earn income.

Especially, if the deployment begins in territories such as California, where the Spanish brand is beginning to be known thanks to its establishment in Mexico.

in the new countries where it operates, Cupra will sell its cars directly and digitally without having to weave a commercial network.

The event, with more than

Other personalities also attended, such as Salvador Illa or José Montilla, former president of the Generalitat, and the general secretary of the UGT, José María Álvarez;

as well as ambassadors of the Cupra brand such as Alexia Putellas, the 2021 Golden Ball, or Saúl Cravioto or the president of FC Barcelona, ​​Jean Laporta.