Lexus, Subaru and Totota are the most reliable car brands, according to the survey carried out by OCU and other user associations from Belgium, France, Italy and Portugal,... 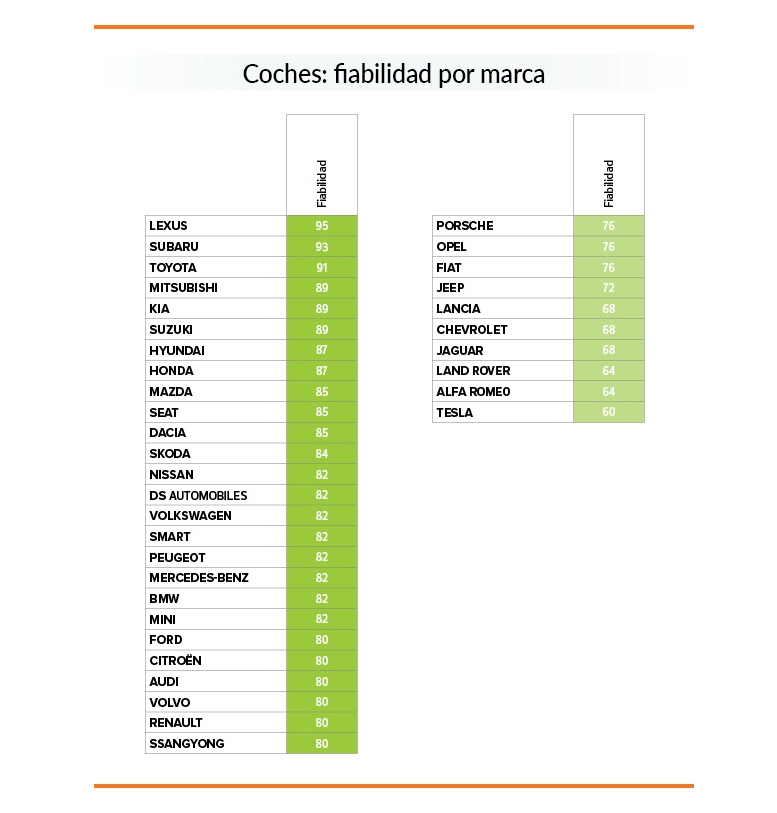 Lexus, Subaru and Totota are the most reliable car brands,

according to the survey carried out by OCU and other user associations in Belgium, France, Italy and Portugal,

All indicated their car model, the breakdowns they had suffered since they bought it and their level of satisfaction with the vehicle.

In total, the study collected information on

326 models in 523 versions with different engines.

To assess reliability, the study took into account both the number of breakdowns and their severity.

Lexus repeats as the most reliable brand

, as in the previous survey, followed by Subaru and Toyota.

Two Koreans, Hyundai and Kia, are also placed in the Top 10 most reliable brands.

Among the European manufacturers, Seat, Dacia and Skoda stand out, in that order.

In fact, the Spanish manufacturer is the first among Europeans.

At the other extreme, the results are more surprising.

Tesla, a brand with high-priced cars, appears as the least reliable,

accompanied by other luxury car manufacturers such as Alfa Romeo or even Jaguar luxury brands.

The best valued, a diesel VW

Meanwhile, by engine type, the category that concentrates the most cars with an excellent reliability score is that of non-plug-in gasoline hybrids, with ten models that exceed 95 out of 100 in reliability.

As for the rest of the engines,

in gasoline the most recommended in this regard are:

Among the non-plug-in hybrids,

If we talk about PHEV or 100% electric, the winners were two plug-in hybrids: Kia Niro and Mitsubishi Outlander Kia

Finally, with regard to breakdowns reported by customers,

the most numerous, with 17% of cases, are those caused

power and steering systems (7% in both cases), shutting down the engine and air conditioning/heating, with 6% failures.