Official statistics from the Professional Football League Committee revealed that the Al Ain team deserved to be crowned the ADNOC League title for the 14th time in its history, after it dominated most of the collective and individual numbers, which paved its way to ascending the podium to receive the gold medals and the championship shield. 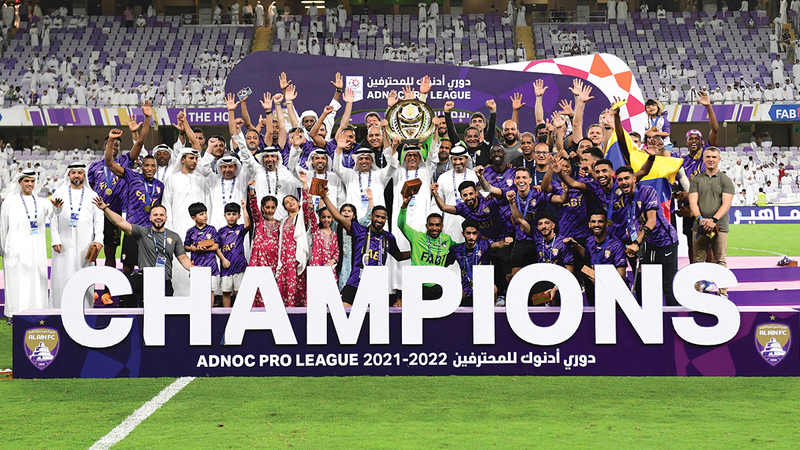 Official statistics from the Professional Football League Committee revealed that the Al Ain team deserved to be crowned the ADNOC League title for the 14th time in its history, after it dominated most of the collective and individual numbers, which paved its way to ascend the podium to receive the gold medals and the championship shield, after a long wait. Four seasons.

The "Violet" finished the season with 65 points, a full 11 points behind its closest followers, the Sharjah team, which gave it the crowning of the title, but this amount of points collected by the team after its superiority over all other clubs during 26 matches in which the team won the most with 20 matches, while the draw In 5 meetings, the "leader" received a single loss, which was against Sharjah, which is the least defeated team.

According to the statistics in terms of collective numbers, Al Ain team scored the most goals with 57 goals, followed by Al Wahda second with 51, Sharjah third with 46, Al Nasr fourth with 42, and Al Jazira fifth with 42 also.

The "leader" also showed defensive solidity, as he is the least receptive to goals, as his nets shook only 17 times, followed by Sharjah second with 25 goals, Al-Wahda fourth with 25 also, and Al-Ahly youth fourth with 30 goals.

Al-Ain is the most scored from inside the region, as it scored 56 goals out of 57, which confirms the offensive attacking style that the "leader" followed during the season, while Al-Nasr scored 39 goals from inside the penalty area, and Al-Wahda managed to score 38 goals as well from inside. Region.

The team also topped the list of the most receiving corner kicks with 177, the most in penalty kicks with 9 kicks, and the least amount of yellow cards, as its players received only 35 warnings.

Al-Ain player, Moroccan Sofiane Rahimi, is equal with Al-Nasr player Dia Sabaa in the list of players with the most goals, with 9 for each player.

The Togolese Laba Kodjo is the most shot on goal by Laba Kodjo with 105, while his colleague Bandar Al-Ahbabi tops the list of players who execute the most crosses with 101, while goalkeeper Khaled Issa kept his net in 13 games as the cleanest goalkeeper.

• For his part, the Ukrainian team coach, Sergey Rebrov, praised the team’s collective performance, and its success in changing the players’ mentality, to become looking for victories, noting that when he received the team’s training, he had finished the season in sixth place, stressing that the hard work he had done The players, with their hard work in training and matches, resulted in achieving the title of the Professional League.

In response to a question by "Emirates Today" before leaving the Emirates for his country, Rebrov said about the Ukrainian press' talk about the level of the ADNOC Professional League, that the tournament is not as described and that he faced a different difficulty represented by the high temperature during the summer, praising at the same time , with all the team players, stressing that they were up to the challenge in all seasons of the year and deserved as a result of that crowning the title.

• Al-Ain collected a point in the league, 11 points ahead of its closest rivals, Sharjah.

• Only once did Al Ain nets shake, followed by Sharjah and Al Wahda with 25 each.