Real Madrid beat Liverpool in the 2021/22 Champions League final to win the European Cup for the 14th time in history. The only goal after an hour of the match was scored by Vinicius Junior, who closed the chamber of Federico Valverde. Thibault Courtois, who made nine saves, was recognized as the best football player. The Belgian did not allow the opponent's leader Mohamed Salah to hit his goal, who struck six shots on target. Also, the confrontation was overshadowed by serious organizational problems. Due to long queues, the starting whistle was delayed by almost 40 minutes, and the police had to use tear gas. 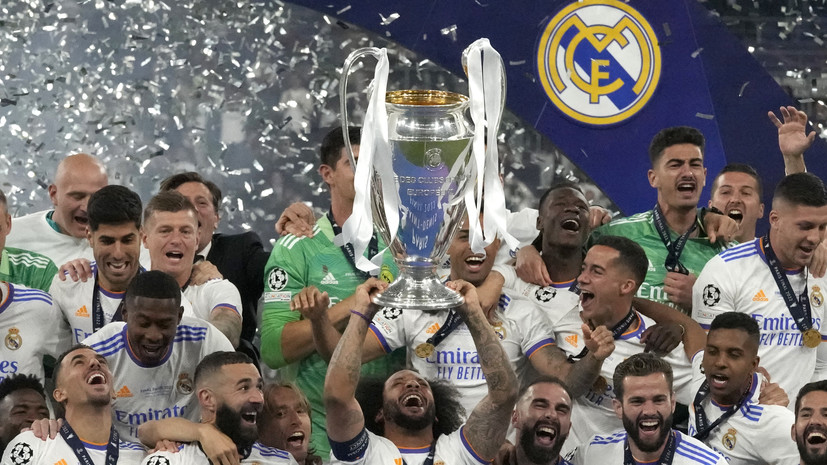 Before the final match of the Champions League between Real Madrid and Liverpool, football fans were wondering if Liverpool would be able to break the opponent's cup character, because before that Madrid had won all seven decisive matches of the tournament.

Including in 2018 in Kyiv, they turned out to be stronger than Jurgen Klopp's wards, who dreamed of taking revenge four years later.

The teams approached the new meeting with almost perfect lineups.

Carlo Ancelotti could count on all the wards at all.

His opponent was left without only minor striker Divock Origi.

Also questionable was the entry into the field of midfielder Thiago Alcantara, who received an injury in the last round of the Premier League match against Wolverhampton.

However, the player managed to recover and even got into the base.

The only intrigue concerned the position of the left winger, but again Klopp opted for the well-established rookie Diaz over Diogo Jota.

The composition of the Spanish team also turned out to be extremely predictable.

Three in the center of the field were Toni Kroos, Luka Modric and Casemiro.

And Karim Benzema was supported from the flanks by Vinicius and Federico Valverde.

The only thing is that the place of the latter on the right edge of the attack could well have been taken by Rodrigo, who scored the decisive double in the return semi-final match, but the headquarters preferred the Uruguayan more useful in the destruction.

Unfortunately, the match was overshadowed by serious organizational problems at the Stade de France.

Queues formed at the entrances to the stadium, due to which many fans waited for several hours to get into the arena.

In order for everyone to have time for the starting whistle, UEFA postponed it for 15 minutes, and then for another half an hour.

As a result, many football fans began to climb over fences and turnstiles in the hope of getting into the stands.

According to media reports, among them were stowaways.

The stewards did not cope with the situation.

Law enforcement officers also had to use tear gas, which also fell on innocent people.

So, the brother of Liverpool defender Joel Matip and his pregnant wife suffered.

Even the bus with the English team failed to arrive at the Stade de France on time.

It is reported that he was driving without a police escort and got stuck in a traffic jam.

Other cars had to clear his way.

The English club expressed indignation at everything that happened and demanded that UEFA investigate.

A message on the Merseysiders' website said that the team's fans were facing "security breaches".

The organization responded by issuing a statement blaming the incident on fans who tried to get to the game without tickets.

Allegedly, they blocked the turnstiles, which led to the formation of queues.

However, the delay of the match and the late arrival at the stadium did not affect the actions of Klopp's wards.

On the contrary, they seized the initiative from the first minutes.

It is difficult to say whether Real Madrid gave away the ball on purpose.

On the one hand, Madrid are strong on counterattacks, on the other hand, the opponent crushed them with high pressure and began to loosen the defense.

Liverpool were especially active on the right flank, where Vinicius did not always have time to help Mendy.

As a result, Alexander-Arnold and Salah often secured a numerical advantage in this area.

Not surprisingly, it was they who created the first moment.

The defender shot, and the Egyptian struck in touch into the near corner.

The whole game was held under the sign of confrontation between this pair.

Mohamed, who was forced to ask for a replacement due to an injury in the final four years ago, did not hide his intention to take revenge on the Madrid team, and proved it in practice.

The striker was incredibly charged to fight and regularly found free space, moving along the entire front of the attack.

The defenders could not cope with him - the attacker struck nine blows, six of which hit the target.

Moments were sometimes created by other Liverpool players.

For example, after an extremely unpleasant shot by Manet against Courtois from outside the penalty area, the Belgian miraculously turned the ball into the post.

Real Madrid did not create almost anything in attack before the break.

In the first half, Ancelotti's team failed to establish counterplay.

The Merseysiders in their own half acted carefully and did not leave space for Vinius, Benzema and Valverde.

As a result, creamy before the break inflicted only one inaccurate blow.

Much more memorable was the Frenchman's canceled goal during a rare dangerous attack.

Taking advantage of the throw into the penalty area, the striker almost ran away to a rendezvous with Alison, and after touching Fabinho still hit the gate.

But referee Clement Turpin, after long deliberations with his colleagues at VAR, called offside, despite the fact that the ball bounced to the forward from the opponent.

In the second half, the game leveled off a bit.

The opponents were not so strict in defense and allowed each other to organize quick attacks.

One of these chances and took advantage of "Real" after an hour of the meeting.

Wards Ancelotti passed the left flank of the opponent's defense in several passes.

Nobody prevented Valverde from the corner of the penalty area from performing a cross to the far post, which was closed by Vinicius.

Not the best way in this episode was played by Alexander-Arnold, who did not keep track of the Brazilian.

Looking ahead, for the Spanish team, this shot on target was the only one in the match and only the third in total.

Having conceded, Liverpool again pressed Madrid to the gate and deserved at least one goal.

Before the break, he repeatedly rescued partners, and then reflected everything that flew on target.

And again, he had to actually confront Salah alone.

In the 64th minute, the Egyptian, moving to the center from the right flank, shot into the far corner - the goalkeeper deflected the ball with his fingertips.

On the 80th, Mohamed struck from outside the penalty area, and the projectile ricocheted from a partner in opposition to the Belgian, but he miraculously managed to react.

Finally, in the next attack, the striker skillfully processed the throw from the depths at speed and left Militao.

The striker hit from a few meters with all his might, but Courtois managed to put his hand to the side in this situation.

In total, according to the results of the meeting, Thibault had nine saves, despite the fact that his counterpart Alison did not make a single one.

The defensive midfielder Casemiro also had a great match, who, at a difficult moment for the team, did a huge amount of rough work and did not allow the opponent to bring to mind many attacks.

The Brazilian chalked up four tackles, three interceptions, made three clearances and blocked one shot.

The German first threw Jota into battle instead of Diaz, and in the end he released Roberto Firmino and Naby Keita on the field.

But Real Madrid spent the last minutes competently on experience and did not allow Liverpool to organize the final assault.

Taking into account the KEC, they won the 14th major European Cup.

Ancelotti also improved his personal record, who won the Champions League four times with different teams, two each with Milan and Real Madrid.

This is the best indicator among coaches.

And Klopp, on the other hand, suffered his third defeat in the finals of the tournament with only one successful outcome.