Arruabarina tests 24 players against Gambia in preparation for Australia

The first national football team was satisfied with a 1-1 draw against Gambia, during the friendly match that brought them together yesterday, at Zabeel Stadium in Al-Wasl Club in Dubai, as part of Al-Abyad’s preparations to meet Australia at Ahmed Bin Ali Stadium in Doha on the seventh of next June in the Asian qualifying playoff 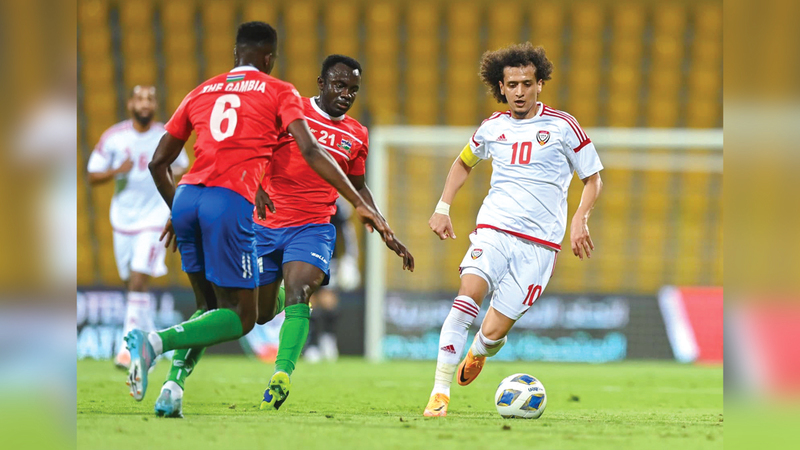 The team is satisfied with a draw... and "Amouri" returns after a long absence

Arruabarina tests 24 players against Gambia in preparation for Australia

"Amouri" participated in the second half.

The first national football team was satisfied with a 1-1 draw against Gambia, during the friendly match that brought them together yesterday, at Zabeel Stadium in Al-Wasl Club in Dubai, as part of Al-Abyad’s preparations to meet Australia at Ahmed Bin Ali Stadium in Doha on the seventh of next June in the Asian Cup Qualifying Supplement world 2022.

The team played the match with two different formations over the course of the two halves, and coach Arruabarina tried 24 players, as he kept only one player from the starting lineup that played in the first half, Khaled Al-Hashemi, while the rest of the elements were replaced by other players, and Omar Abdul Rahman appeared in the second half after a long absence. The team's mission will leave for Doha this evening with a delegation of 30 players, to set up a short preparation camp there before the upcoming meeting, and Al-Abyad will perform his first training in Doha tomorrow.

Al-Abyad took the lead in the first half through a penalty kick by Ali Mabkhout (38), and the Gambia team tied at the beginning of the second half through Musa Barrow (48).

The Gambia match is the last rehearsal for the Whites before facing Australia in this decisive historical confrontation, in which the team needs to win and meet the Peruvian team in the last leg of qualifying for the World Cup.

The match represented a good rehearsal from all sides, although the team did not appear with the strong personality that he appeared in in his last matches against South Korea, and the technical staff of the team, led by Argentine coach Rodvo Aruabarina, stood during the match on the strengths and weaknesses of the team, and worked to strengthen the positive aspects besides Address any negatives before meeting Australia.

The Gambian team was distinguished by its strong tackles, which is the same method that is characterized by the Australian team.

Coach Arrobarina relied on the front line in the first half on the trio of Hareb Suhail, Caio Canedo and Ali Mabkhout, while Abdullah Hamad was assigned the task of the playmaker, in addition to the presence of the players Ali Salmin and Abdullah Ramadan.

In the first half, the coach pushed a squad that included goalkeeper Khaled Issa, in defense Walid Abbas, Khalifa Al Hammadi, Khaled Al Hashemi and Khaled Al Dhanhani, and in the middle Ali Salmin, Abdullah Hamad and Abdullah Ramadan, and in the attack, Suhail, Cayo Kanedo and Ali Mabkhout fought against.

Absence of the white fans from the stands

The stands of Zabeel Stadium in Al-Wasl Club, which hosted the match between the national team and Gambia, were empty of spectators, with the exception of a few.

The Emirati fans were absent from the stands, despite the Football Association’s decision to allow the team’s fans to be present at the match, to support the players and spread enthusiasm in their ranks to present everything they have in the green rectangle before facing Australia.