The national karate player, Marwan Al-Mazmi, won the silver medal in the individual kata competition, as part of the third Gulf Games hosted by the State of Kuwait and will conclude tomorrow with the participation of more than 1,700 athletes from the Cooperation Council for the Arab States of the Gulf, where Qatar won the gold 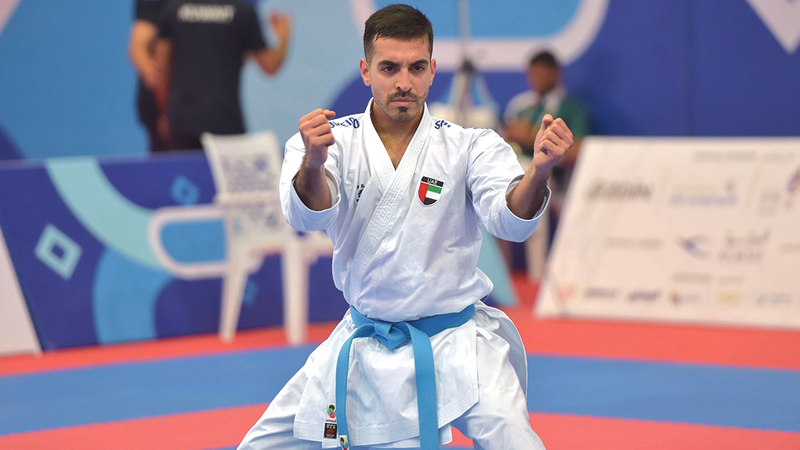 Karate competitions yesterday resulted in a silver medal for Mazmi.

The national karate team player, Marwan Al-Mazmi, won the silver medal in the individual kata competition, as part of the third Gulf Games hosted by the State of Kuwait, which will conclude tomorrow with the participation of more than 1,700 athletes from the Cooperation Council for the Arab States of the Gulf, where Qatar won the gold and Kuwait the bronze medal.

Al-Mazmi’s silver came after losing the Kuwaiti player Sayed Muhammad in the final match, achieving 24.96 points, compared to 25.42 points in the competitions held at Sheikh Abdullah Al-Jaber Hall. The Saudi player, Misfir Al-Asmari, also won the bronze medal with a score of 24.60 points.

The UAE's balance rose to 43 medals in third place in the general table of medals, with 17 gold, 15 silver, and 11 bronze medals.

Our national men's padel team was able to beat the Bahraini team 2-1 after a strong match that saw the two teams tied and resorting to a playoff in which the sons of the UAE won the silver medal.

Al-Abyad Women also achieved third place and a bronze medal in the Badel Tennis competition, after winning the third-place match against the Saudi team, 2-1. The first score was 2-0 (6-1, 6-0), before the two players Fatima Al-Janahi and Fatima Al-Mudarab lost to Saudi team players Areej Fareh and Sarah Sahleb 2-0 (7-5, 6-2), to decide the last match as a result of the match. In favor of our team, after the Emirati duo Nouf Omar and Maryam Al Shamsi defeated Saudi national team players Najwa Sahleb and Noura Al-Sulaiman, 2-0, (6-1, 6-0).

The "Women's White" defeated the Omani team in the fourth round, with a score of 18-7, in the women's 3×3 basketball competition.

In the fifth round, the national team defeated the Qatari team 15-14, while the Saudi team surpassed its Omani counterpart 14-10, and the Kuwaiti team managed to overtake the Bahraini team 14-8.

The national handball team lost by a goal difference against its Bahraini counterpart, 25-26, in the match that brought them together at Sheikh Saad Al-Abdullah Sports Hall, making the task of competing for the first places more difficult after his score was devoid of points after receiving the second loss.

• The first fencing competition in the Gulf Sports Games, which was launched by the Fleury weapon competition for the men's singles category, saw the national team duo Faris Al Balushi and Hamad Al Jallaf leave the preliminary round, while Shehab Al Jaabi and Khalifa Al Kaabi qualified for the round of 16, but they were not lucky to reach the round of 16. Quarter-finals competition.

The results of the saber competition for the individual category resulted in the exit of the trio of our team, Hamad Al-Mazmi, Khalifa Al-Abri and Khaled Mubarak, from the first preliminary rounds.

The women's basketball team qualified with the full mark to the semi-finals.