“He threatened to take me out of the sport”: Nugumanova responded to critics and brought new charges against Rukavitsyn

Figure skater Elizaveta Nugumanova made new accusations against former coach Evgeny Rukavitsyn and his assistants, whom she had previously reproached for insults and humiliation. According to her, they threatened to end her career and "send to the next world." The girl promised to provide evidence in the near future. Meanwhile, Andrei Mozalev and Maria Talalaikina spoke with words of support for her. But experts continue to speak out in defense of colleagues. So, Maxim Maxaim Trankov urged the victim to pay attention to their own disastrous results. 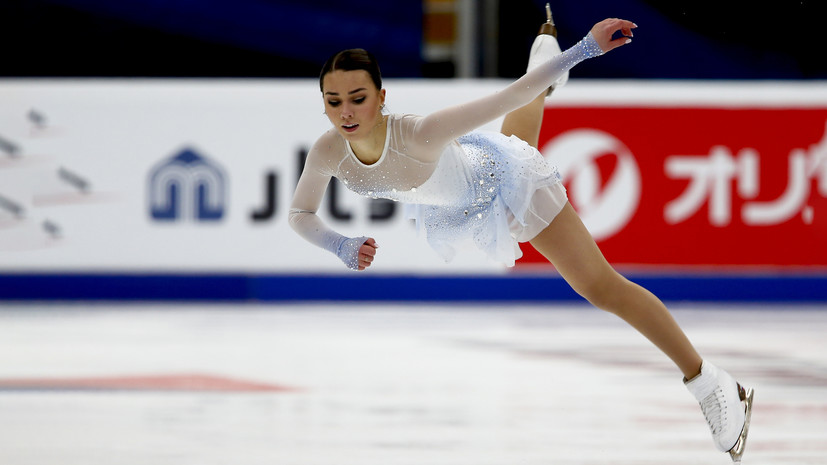 A frank interview with Elizaveta Nugumanova produced the effect of a bombshell in Russian figure skating.

The girl accused the former mentor Yevgeny Rukavitsyn of humiliation and insults.

In particular, he called her fat and forbade her to work in an adult group.

Confessions caused a mixed reaction, but many supported the specialist.

The winner of the youth stages of the Grand Prix decided to answer the critics.

She again emphasized that in the Rukavitsyn group they were engaged in targeted persecution of athletes and, as another victim, she named the two-time winner of the silver medals of the junior world championship, Serafima Sakhanovich.

“Valentin Molotov once drove up to me and said that if I skate programs, he will make a bandwagon and I will go to the next world.

I skated programs without music, they simply didn’t allow me, but I really wanted to, I wanted to perform well.

I understood that I needed to train, but people deliberately did all this, and I just didn’t know who I was disturbing and what was happening at all, ”Nugumanova told Match TV.

Separately, Elizabeth spoke about the comments of the world championship winner Alena Leonova, who has recently been working with Rukavitsyn.

She explained the claims to the skater about being overweight with real problems.

According to the specialist, the girl should have listened, and not complained to journalists about normal advice as part of the work process.

“It is not at all surprising to read an interview with Leonova, who is completely dependent on Evgeny Vladimirovich - she works in his group.

She has been on the ice at least twice this season and is simply deceiving readers.

She was pregnant, then she gave birth, a family, a child, you know - not up to work, ”added the athlete.

Finally, she recommended that colleagues tell the truth about their relationship with specialists and learn well about their human qualities before moving on.

“God is the judge of everyone who is trying to cover up the crime of adults ... I want the athletes not to be afraid to tell the truth and not be silent, since I was silent for almost the entire season.

She was silent because she was afraid of the worst - they would remove me, take away my childhood dream.

I just wanted to ride, ”summed up the winner of the junior stages of the Grand Prix.

If, after the first interview, almost no words of support were heard against Nugumanova, then two figure skaters decided to stand up for her at once, Andrei Mozalev and Maria Talalaikina.

The first confirmed that last season he saw her in tears almost every day in the corridors near the ice, as they were engaged at the same rink.

“We used to skate on the same ice, she is one of those athletes who completely devote themselves to their work and live in figure skating.

I want to sincerely wish her good luck, the best, and that only good moments meet on her way ... Elizabeth is kind and honest, ”Mozalev wrote in the Telegram channel.

And Talalaikina published a photo of a colleague on social networks and emphasized that there should be no place for “humiliation and bullying” by mentors in figure skating.

“I thought for a long time, but still I will express my opinion.

A coach is the most important person in an athlete's life, sometimes even more important than their parents.

And now I am lucky to work with real professionals, ”said Talalaikina.

There was such a stir around the story of Nugumanova that even the well-known commentator Dmitry Guberniev did not stand aside.

He called for an investigation if evidence of the guilt of Rukavitsyn and Molotov was presented.

At the same time, the girl herself promised to “provide some facts” soon, so it is possible that the scandal is only flaring up.

“... The facts of what is happening to me in this group, where Evgeny Vladimirovich personally threatened me, said that he would remove me from the sport.

He said that he had connections, and other coaches who worked with him in the same group, each of them performed his task, ”Nugumanova said.

Only the honorary president of the organization, Valentin Piseev, spoke out.

He admitted that he did not really know the victim and advised her to deal with the problem on her own.

“Who is she for me, so that I somehow characterize her, how does she act?

When I was the head of the FFKR, she did not show anything.

On the basis of some girl who has probably finished performing, to make her an advertisement?

She is still no one to write about her.

You need to write about serious athletes, not about such.

She does not deserve to be mentioned on the pages of the press, ”the Metaratings functionary quotes.

But the leading coaches of the country continue to support Rukavitsyn.

For example, the famous choreographer Ilya Averbukh noted that he repeatedly staged programs for his wards, including Dmitry Aliev, and did not notice any aggression towards the athletes.

“According to my observations, the atmosphere at training there is wonderful, and in general they are very intelligent and subtle people - both Zhenya and Valentin Molotov.

I have great respect for them, I will always support them.

Of course, everyone has the right to an opinion, to some statements, but in this case I’m definitely on the coach’s side, ”Match TV quotes Averbukh.

In his opinion, the mentors only tried to save the girl's career, but she refused to listen to their advice.

And Alexei Yagudin also advised her to look for problems in herself.

He emphasized that coaches should not overdo it with students and must remember that there are “children with increased anxiety” among them.

At the same time, he did not see anything critical in what happened specifically with Elizabeth.

“This happens every day, but it all ends in friendship and peace.

These are the levers of any mentor in any form, it helps to stimulate the athlete to improve his skill level, improve his work.

It is a pedagogical method that is good in any format.

She is still young, she should think, because in five years she will bite her elbows that she made such claims, ”Laishev assured.

She accused Alexander Svinin and Irina Zhuk of specifically asking the judges to underestimate her grades for the sake of a good result for other wards.

“When the fans asked us questions about places and points, we stood, nodded and smiled politely.

What else to do?

Then the judges came up after the competition and said: "Your coaches asked to put you in for such and such."

And you have a complete dissonance in your head.

You think: “Why do I even ride in this group, if this happens?”

Okay, so be it, if we are a team and then compensate for all this.

But when the judges tell you this…” Shevchenko told R-Sport.

In response, experts denied this information and linked Sophia's behavior with resentment.