He won a raffle. In 2015, at the age of 29, Norwegian Kristin Harila had just been promoted to director of the furniture company Skeidar, she was on track for a mortgage and was living very ... 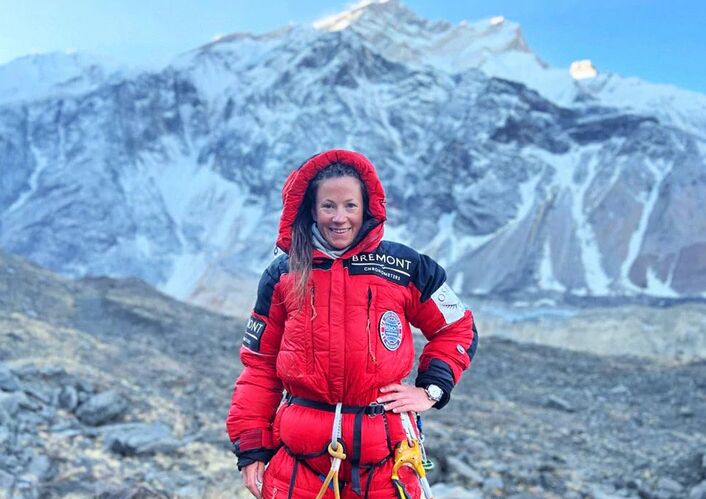 He won a raffle.

had just been promoted to director of the furniture company Skeidar, she was on track for a mortgage and was living very comfortably in Oslo, but she won a raffle.

"Do you want to travel to Kilimanjaro with everything paid? Sign up," she claimed.

And she signed up.

And she went to Kilimanjaro, the highest mountain in Africa.

And she reached the top.

And she almost stayed there.

But her experience changed his life.

"I lost my sight, I vomited and I felt that my head was about to explode, but I found something in that mountain, that feeling of being free, that feeling of simplicity, that caught me", explains the climber today, the mountaineer today, the today himalayista through its main sponsor, Bremont.

In just seven years, Harila has gone from trying to sell more chairs and sofas to trying to be the fastest person to tread the 14 'eight-thousanders' on the planet.

If she gets it

His goal is to beat the record of the Nepalese

, who in 2019 completed the 14 'eight thousand' in six months and six days, or at least drastically reduce the female record that

owns , who crossed out the entire list in almost ten years.

Harila's attempt, the simple existence of it, whether he succeeds or not, demonstrates the creation of a new mountaineering, speed mountaineering, whose growth is now impossible to calculate.

The Norwegian, in fact, had other goals, but she rose to the challenge when she saw Purja's Netflix documentary titled 'The 14 Eight Thousands: Nothing Is Impossible'.

From the offices to the mountain

Although more abrupt was his transition from the offices to the highest mountain.

"People around me were surprised that I quit my job, but I no longer had faith in what I was doing. You can't waste your time on things you don't want to do," says Harila, who, yes, had to stop her soon. adventurous spirit.

The idea of ​​her to tread the Seven Summits, that is, the highest mountains of each continent - dividing America in two - went to waste, but in return, she watched Purja's documentary and found a new challenge.

As a training, last year she spent several weeks in Nepal and joined Everest and Lhomtse - the fastest woman to do it.

This year everything is going as she had planned.

As Purja did, Harila makes the ascents with oxygen to spare, has helicopters that take her from base camp to base camp and has a huge team of Sherpas behind, in this case, the company '8KExpeditions'.

Her project has a budget of 600,000 euros, which the Norwegian has initially covered with her own funds and thanks to her sponsors, since the crowdfunding campaign she started had no effect - she collected 7,150 euros.

Raised in Vadso, northern Norway, as a young woman she moved to Lillehammer to train as a cross-country skier, and later to Oslo to work in business.

Now his house is in the mountaineering history books.

If he beats Purja, he will confirm that there is a race underway in the 14 'eight-thousanders' and that women can be in it just fine.

It is another part of his challenge: gender vindication.

"In mountain environments there are hardly any women, I only meet men. I want to show girls that a woman can do the same thing as a man and even do it in less time. I want to inspire them";

Not long ago I went from meeting to meeting and now, you see, from summit to summit.

And all because she won a giveaway.