Our national judo team raised the UAE’s tally of colored medals in the competitions of the third Gulf Games hosted by Kuwait until the 31st of this month, with the participation of more than 1,700 athletes from the Cooperation Council for the Arab States of the Gulf, to 37 colored medals after winning three golds. 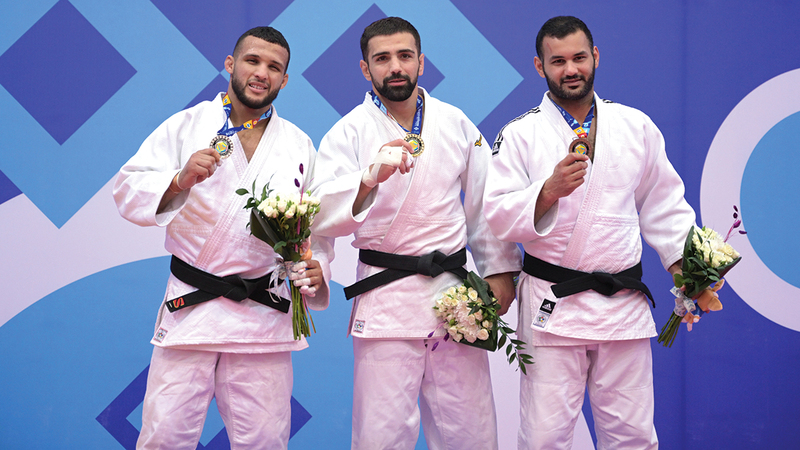 Our national judo team raised the UAE’s balance of colored medals in the competitions of the third Gulf Games hosted by Kuwait until the 31st of this month, with the participation of more than 1,700 athletes from the Cooperation Council for the Arab States of the Gulf, to 37 colored medals after winning three golds, placing the UAE in third place.

With this, the UAE Judo achieved a total of six medals, four gold, silver and bronze, in a successful participation in its competition program at all levels.

The UAE is participating in the tournament with 285 male and female athletes participating in 16 different individual and team games in 111 competitions in 12 locations. The delegation is accompanied by 39 coaches, 24 administrators, and 12 specialists and therapists.

On the other hand, our esports team defeated its Saudi counterpart 2-0 in the quarter-finals of the legends game, and Issa Al Dhaheri, Butti Al Mansouri, Faris Al Mazrouei, Khalifa Al Mansouri, and Muhammad Al Matrooshi participated, to qualify for the semi-finals, whose competitions end this evening. Meet the Kuwaiti national team.

Our national tennis team lost in the doubles competitions in the quarter-finals against its Kuwaiti counterpart, in which we were represented by Omar Ahmadi and Abdullah Al-Marzouqi, where it ended with a score of 6-0 and 6-0.

The coach of our national tennis team, Mahmoud Nader, confirmed that participating in the activities of the third Gulf Games came with the aim of competing for all medals in the singles, doubles and team competitions. And he was moving at a steady pace towards resolving the first match after his lead over his Kuwaiti counterpart, before the injury prevented him from finishing the match and qualifying for the round of 16 of the competition.

Our national men's futsal team concluded its Gulf campaign with a 4-1 loss to its Bahraini counterpart, crowning the Bahraini Red with the bronze medal after this victory, while the Kuwait team won the gold medal and the Saudi team won the silver medal.

Ammar Ali, the Bahrain player, opened the scoring in the match between our team and Bahrain, and his colleague Saleh Sinjar strengthened his team's progress by scoring the second goal to reduce the difference for our player Abdullah Al-Hosani by scoring the first goals of Al-Abyad before the end of the first half.

The task became more difficult in the second half, after the Bahrain national team scored the third goal through its player Mohammed Abdullah. Ammar Ali scored his second personal goal in the match and the fourth for Al-Ahmar.

Our national volleyball team lost to the Saudi team 3-0, so our chances of competing for the top three places diminished after suffering the third defeat.

The first national handball team will launch at six in the afternoon today, its journey with its Qatari counterpart, to meet its Bahraini counterpart on Saturday, and face Kuwait on Sunday, and conclude its matches against Saudi Arabia on the 31st of this month.

• The UAE ascends to third place in the general ranking table.

A full mark for the "white ladies" in the tennis exchange

The Al-Abyad Ladies also achieved a deserved victory over its Bahraini counterpart in the first padel tennis competition, which is held at the Kuwait Sports Club, with the full score, after winning 3-0. While Latifa Abdulaziz Al-Salman and Sheikha Abdullah Al-Janahi won the second match 2-0, and in the third match, Nouf Abdul Hamid Omar and Fatima Hassan Shahdour won 2-0.

Omar Sharif Al Marzouqi, a member of the Emirates Tennis Federation, confirmed that the women’s team’s participation in the third Gulf Games is its third participation after its formation last February, in embodiment of the vision of Sheikh Saeed bin Maktoum bin Juma Al Maktoum, President of the Federation, who directed to provide all support. Paying attention to the female component of the national team players, so that they can achieve development and highlight the honorable face of the capabilities and potentials of Emirati women.