“Lawlessness cannot continue indefinitely”: the leaders of the Giro d'Italia supported the cyclists of Gazprom-RusVelo

Leading athletes of the world supported their colleagues from the Russian team Gazprom-RusVelo, previously deprived of their professional status by the International Cycling Union (UCI). The riders came to the start of the 16th stage of the Giro d'Italia in blue bracelets with the inscription in English "Why?". According to the International Association of Professional Cyclists, the UCI does nothing for the employment of athletes and staff. The head of the Russian team, Renat Khamidullin, in an interview with RT, expressed the opinion that only a positive decision of the Court of Arbitration for Sport can change the situation. Meanwhile, the driver Ilnur Zakarin complained not only about the lack of funds, but also about the inability to train and perform at a serious level. 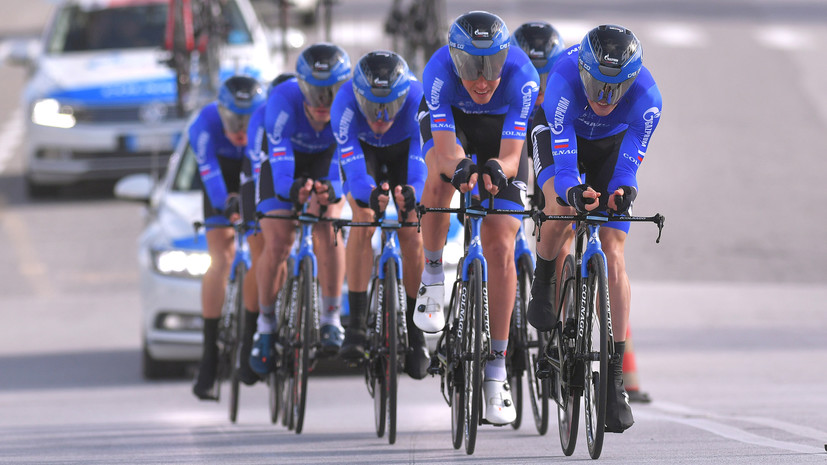 “Sport is out of politics and must remain impartial”

Support from foreign cyclists for the Russian team Gazprom-RusVelo, which was stripped of its professional status in early March, was a pleasant surprise.

Moreover, a number of riders took part in the action, including the leader of the overall standings of the Giro d'Italia stage race, Richard Carapaz, who plays for INEOS Grenadiers.

In the course of the 16th stage, he put on a blue bracelet on his wrist with the inscription in English "Why"?

The example of the Ecuadorian was followed by the most experienced sportsman from "Astana" Italian Vincenzo Nibali and other participants of the race.

Thus, they called to pay attention to the fate of their colleagues from Gazprom-RusVelo, who have been in limbo for almost three months.

In early spring, the International Cycling Union (UCI) banned Russians and Belarusians from participating in all tournaments under the national flag, and professional teams were deprived of their status.

At the same time, domestic cyclists defending the colors of teams from other countries continued their performance.

Since then, the 21 riders (including only nine Russians) who are part of Gazprom-RusVelo have been deprived of the opportunity to go to the start and have not received a salary due to lack of funding.

At the same time, the UCI is in no hurry to solve the problem, which caused outrage even in the International Association of Professional Cyclists (CPA).

“We tried our best to promote dialogue between the UCI and the team in order to find a solution.

Our request to allow these athletes to continue racing in a neutral jersey or to allow them to join other teams proved impossible,” Cyclingnews quoted the head of the organization, Gianni Bugno, as saying.

They also recalled that a total of 164 people were left without a job, salary, present and future "for no logical reason."

“The peloton is united in supporting the world.

At the Giro d'Italia, like at any other race, athletes from all countries sit side by side, competing with each other in a spirit of respect and camaraderie.

Sport is out of politics and must remain impartial.

At the same time, these athletes were denied the right to work for no reason, and we, as an association, believe that we must protect them, ”the statement says.

Marco Canola, one of the Gazprom-RusVelo riders, spoke about what was happening.

He thanked his colleagues for their support and noted that their action should show people what cyclists from the Russian team have to go through.

“We are waiting for a reaction from the UCI.

Their previous answers were quite vague.

We tried the diplomatic method, but to no avail.

If they are leaders in the world of cycling, they do not deserve to lead our beautiful view, because they do not embody its values,” Canola said.

In response, the UCI assured that they had done everything possible to solve the problem, although Gazprom-RusVelo was at one point deprived of the support of its main sponsor, Gazprom.

“UCI immediately informed the paying agent of the possible verdicts and conditions for a return to competition.

This concerned the nationality of the team, which can be changed depending on the registration of the paying agent in Switzerland, as well as the financial capabilities of the team, ”the federation assured.

They also recalled the bank guarantee provided for by the rules, which makes it possible to cover the salary of all riders and staff for three months.

“Despite several reminders of this opportunity to cyclists and CPAs, to date, the UCI has not received any inquiries about this and has not been informed of the status of payroll,” the organization added.

“The main thing for us is that justice be restored”

To understand the situation and understand what the future holds for the team and athletes, RT turned to its leader, Renat Khamidullin.

According to him, Gazprom-RusVelo offered different ways to solve the problem, in particular, speaking in a neutral status, but was not heard.

“The support from colleagues, including the Olympic champion Carapaz, is very pleasant.

People put on special bracelets prepared for this occasion.

Their behavior demonstrates that not everything is so unambiguous in relation to Russian athletes, as the European media are trying to present it.

Sport brings together and unites people, no matter how they try to use it for political purposes.

In reality, athletes support each other and express solidarity,” Khamidullin assured.

At the same time, the functionary complained that Gazprom-RusVelo is in limbo and its future is vague.

The team is not able to pay the riders, because at the beginning of March they completely lost their funding.

Now the team is only hoping for a positive verdict from the Court of Arbitration for Sport, where a lawsuit was previously filed.

“Our fate depends on what verdict he delivers.

Actions of support from colleagues can help us, but I'm afraid that CAS will be under serious pressure.

But the representative of Russia Igor Makarov remained in the steering committee of the UCI.

I hope his participation in this matter will have a positive impact.

The main thing for us is that justice be restored, and the frantic decisions that were made outside the law turned out to be canceled.

Intend to fight for their rights and the riders themselves.

According to one of the team leaders, Ilnur Zakarin, some of them also applied to CAS with claims against the UCI verdict.

“I think the court is obliged to take the side of Gazprom-RusVelo.

After all, we have gathered both Italians, and Russians, and a Spaniard, and a Norwegian, and a Costa Rican.

UCI simply deprived them of the opportunity to compete.

Moreover, even before the deprivation of professional status, the team's management turned to the federation with a proposal to change the country of registration and remove the sponsor's logo from the bus, cars and uniforms.

They didn’t support this idea there, ”said the athlete in a conversation with RT.

As for the action of support from foreign colleagues, it did not surprise him.

Zakarin stressed that in the world of cycling, the attitude towards Russians remains normal and they do not face aggression.

“We have a big peloton, we have known everyone for a long time.

Some guys, on the contrary, wrote to me, saying, guys, hold on, we are with you, ”added the athlete.

However, now the cyclists from Gazprom-RusVelo are having an extremely difficult time.

They not only do not receive a salary, but are also deprived of the opportunity to conduct normal training.

It is especially difficult for young Russians who were forced to return home.

Everyone does what they want ... This year I planned to end my career, and I have other sources of income.

But it's hard for other guys.

For example, guys from Russia had to go home because they don't have the money to live and train in Italy like they used to.

Their future is hazy.

People are trying to find new teams and are preparing for the national championship,” said Zakarin.