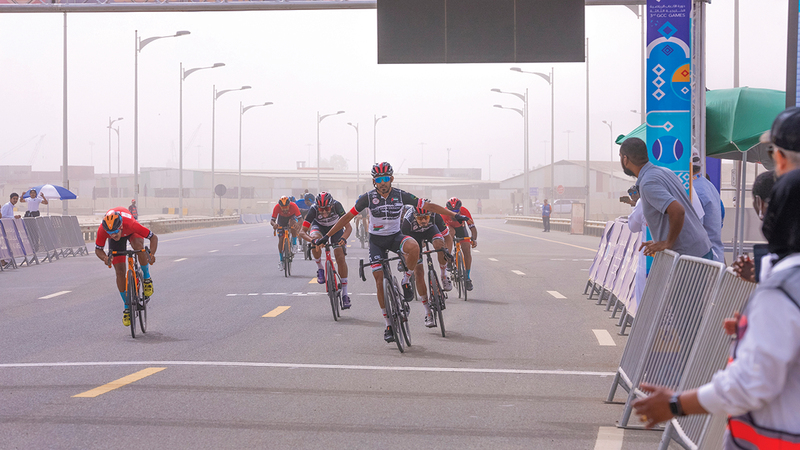 The UAE cycling team imposed its dominance over the cycling competitions in the Gulf Games, and won 11 colorful medals out of 14 that were generally allocated to the cycling competition in the tournament. Our women’s national team achieved the full mark by winning four golds out of four, while the men’s team achieved three golds And two silvers and two bronzes. In total, the UAE collected 34 colored medals, and ranked fourth in the general standings.

The cycling team concluded its distinguished journey in the third edition of the Gulf Games, hosted by the State of Kuwait from 16 to 31 this month, with the participation of more than 1,700 athletes from the Cooperation Council for the Arab States of the Gulf, winning three new medals in the men's road race for individual and team.

Ahmed Al-Mansoori won the gold medal in the road competition for the men’s individual category 1:49:35, while Yousef Mirza won the bronze medal, Bahrain’s Ahmed Nasser won the silver medal, and the national team consisting of Youssef Mirza, Ahmed Al-Mansoori, Jaber Al-Mansoori and Khalid Mayouf Saif Mayouf Al-Kaabi, Walid Al-Naqbi, won the team gold in the road race with a time of 5:28:45, and the Bahraini team won the second place, and the Kuwaiti team ranked third.

In terms of e-sports competitions, Salem Al-Suwaidi and Ibrahim Al-Hammadi won the silver in the FIFA game, while the Kuwaiti team won the gold, and the Omani team won the bronze.

On the first day of judo competitions, the players of the national team were able to gift the UAE three colored medals, as Guram Dranachgili, under 66 kg, won the gold medal after defeating Kuwaiti Issa Al-Marzouq, Saudi Munis Hawsawi and Bahraini Muhammad Nayef.

Saeed Al-Naqbi won the silver medal in the under 73 kg after Bahraini Ramadan Kodjakov won the gold medal, and Ahmed Al-Sumairi won the bronze in the under 60 kg.

The national ice hockey team defeated its Saudi counterpart 5-1 at the beginning of its matches in the group stage, within the competitions of the Gulf Games in Kuwait, hosted by the Kuwait Winter Sports Club.

The national tennis player, Abdul Rahman Al-Janahi, lost to his Saudi counterpart Suleiman Al-Qasim in the round of 16 competitions, after the latter advanced 6-2, and the national team player tied in the second group of the match 6-4, before the Saudi player decided the match and won the third set with a score of 6 -4.

The "Women's White" concluded its participation in the futsal competition that was held in the Sheikh Saad Al-Abdullah Complex, within the Gulf Games in Kuwait, by losing to its Saudi counterpart four goals to one, in the match to determine the third and fourth places.