“I felt the taste of victory”: how Medvedev outplayed Bagnis in the opening match of Roland Garros

Daniil Medvedev won the first victory after undergoing surgery in early April. In the first round of Roland Garros, he broke the resistance of the Argentine Facundo Bagnis in three sets. The Russian tennis player has recorded 12 aces, 35 actively won goals and eight break points. According to Honored Master of Sports Andrei Chesnokov, this will give the second racket of the world self-confidence, because returning to action after a break is always quite difficult. In the second round, the Russian will play with Serb Laszlo Djere, who pretty much ruffled the nerves of Novak Djokovic at the recent tournament in Belgrade. 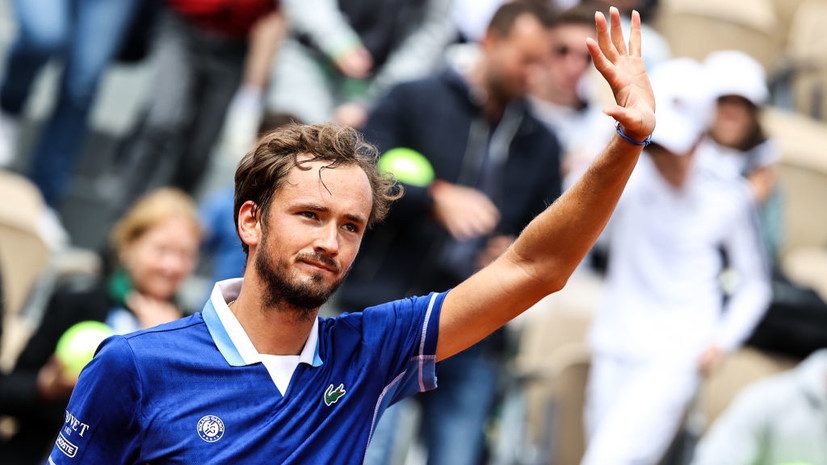 In addition, the previous two days of the tournament have already brought some unexpected results.

So, the champion of the US Open-2020 Dominic Thiem devastatingly lost to the 90th racket of the world Hugo Delien, and in the girls' competition four representatives of the top 10 flew out - from the current champion of the tournament Barbora Krejchikova to Ons Zhaber, who looked amazing on the ground in the spring.

However, the intrigue in the match between the Russian and the Argentine, which took place on the second most important court of Suzanne Lenglen, did not last long.

In the first two games, the opponents exchanged breaks, then each took his serve quite easily, but in the fifth, an interesting struggle finally began.

Facundo tried to take the initiative into his own hands, attacked and actively used short shots to make Daniil move more around the court.

But the Russian quickly saw through the opponent and adapted to his style of play, thanks to which he took the game on someone else's serve.

And suddenly Bagnis crumbled - it took Medvedev less than seven minutes to leave behind three more games and a set.

The Latin American could not fully return to the game: at the beginning of the second set, he gave four games in a row, and there were no reserves that would allow him to recoup.

Bagnis made a lot of mistakes during the draws, could not surprise at the reception, and even on the second serve he allowed Medvedev to do whatever he pleases - 18 out of 24 points remained with the favorite.

The percentage of the first serve for the Russian himself was not too high (53%), but if he did serve, he almost always brought the case to victory (31 out of 39 draws).

In addition, he made 12 aces during the match, despite the fact that the Argentine failed to file right through even once.

Daniel forced the fans to worry only in the third installment, when he allowed Facundo to make a break and equalize the score in the fourth game.

But after that, he pulled himself together, took four games in a row and put a spectacular end to the match.

After the match, Medvedev stressed that he was feeling well after the operation and expected to perform better this year than last.

“Up until last week, we talked a lot with coaches and doctors, I felt support from them.

And although I managed to play only one match on clay to prepare for the tournament, I am very glad that I managed to break through here.

I love Roland Garros, at least since last year.

I hope that this year I can go even further, ”said the athlete.

According to the 1989 Roland Garros semi-finalist Andrey Chesnokov, it was extremely important for the Russian tennis player to win this victory from a psychological point of view.

“It’s good that he got a comfortable opponent, whom he passed quite easily.

This will give him confidence.

He'll need it for the next round.

Daniel needed to win, no matter who and how.

He felt the ground, the blows, the taste of victory.

This is the most important thing, ”Chesnokov explained in an interview with RT.

Comparing the matches in Paris and Geneva, the specialist noted that Medvedev was examined by tennis players of different levels, despite the current position of the Frenchman in the rankings.

“Gasquet is a fairly solid player who was in the top ten.

Bagnis is an order of magnitude lower," Chesnokov stressed.

According to the 18-time USSR tennis champion and commentator Anna Dmitrieva, the match against the Argentine turned out to be more training for the second racket of the world.

“A quiet victory for Medvedev.

He immediately felt that he had an advantage, so he was calm, first of all.

Secondly, he was aimed at testing the elements that excite him.

For example, he took a lot of risks on the second innings and earned double faults.

When he needed to, he even let the opponent go forward a little in every game, this was especially evident in the third set.

Though Bagnis had long since resigned himself to defeat.

In general, Daniil got a very good opponent for the first round, ”Sport Express quotes Dmitrieva as saying.

In the second match, the Russian will meet with the Serb Laszlo Djere, who occupies the 56th line of the world ranking.

The athletes met on the court only once at the tournament in Budapest in 2017, but then Daniel could not complete the match due to injury.

According to Chesnokov, the upcoming meeting with the Serb will be a difficult test for Medvedev.

He brought a lot of difficulties to Novak Djokovic at the tournament in Belgrade.

In the final set, the favorite took the upper hand only in a tie-break.

Still, Laszlo is not the 103rd racket of the world, like Bagnis.

He is a solid tennis player, in the prime of his life, who won many significant victories.

Sometimes a player, even if he barrages at the level of the 50th line of the rating, gets into such a drive rut that he gives out matches at the top 20 or top 10 level, ”the expert noted.

At the same time, the honored coach of Russia Viktor Yanchuk believes that Medvedev will be able to overcome the barrier of the second round.

According to him, the athlete is now going through the stage of getting in shape.

“He is seeded and hits weaker opponents.

I think it's very good, he needs to get in shape.

Given that the matches now take place every other day, he will have time to recover and prepare for the next one.

I think that Daniel will reach the third round, but then difficulties may arise, ”the Championship quotes Yanchuk.