Video.. Barcelona falls at Camp Nou against Villarreal at the end of the Spanish League and Bono wins the Zamora award

Barcelona concluded its career in the Spanish Football League this season, losing 0-2 to its guest Villarreal, on Sunday, in the last 38th round of the competition. 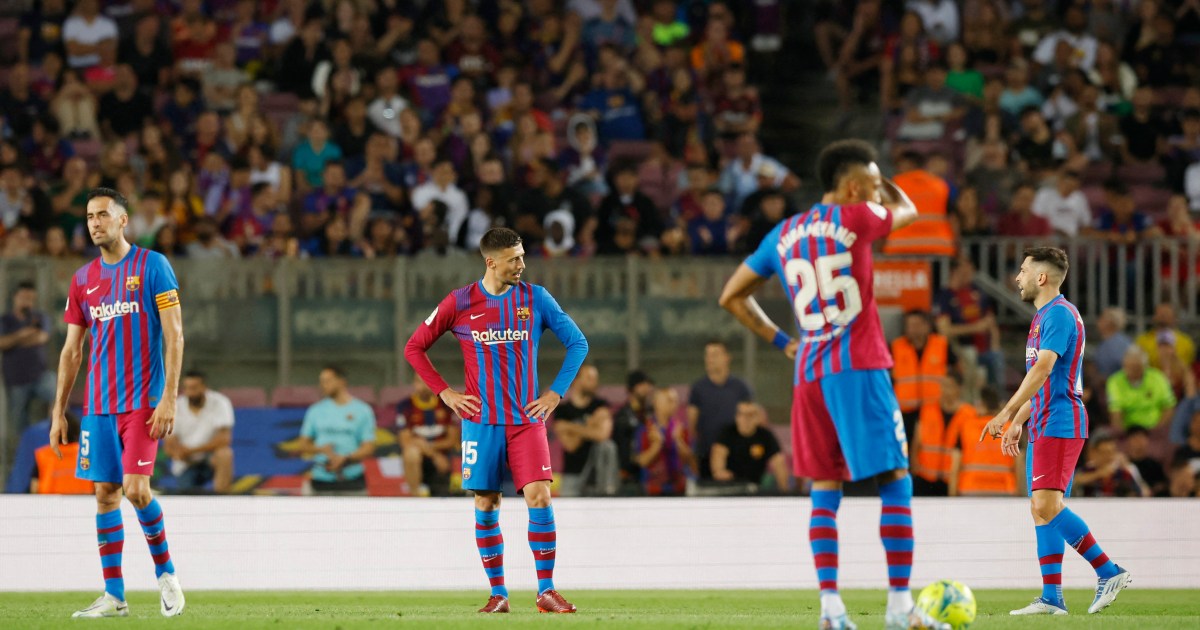 Barcelona concluded its career in the Spanish Football League this season, losing 0-2 to its guest Villarreal, on Sunday, in the last 38th round of the competition.

The rest of the matches of the round that took place today resulted in the victory of Seville at its guest Athletic Bilbao 1-0, Elche over Getafe 3-1, and Cadiz at its host Deportivo Alaves 1-0.

The defending champions Atlético Madrid won an honorable 2-1 victory over Real Sociedad 2-1, to remain in third place with 71 points.

Summary of the "Atletico Madrid" double against "Real Sociedad" in their last matches for the 2021/2022 season 📺# RealSociedadAtleti 1-2 pic.twitter.com/oMm3th2QiI

Real Mallorca also guaranteed to stay in the League after beating its host Osasuna 2-0, while Granada tied with its guest Espanyol without goals.

Summary of the joy of "Mallorca" remaining in the top league after beating "Osasuna" with two clean goals 📺❤#OsasunaRCDMallorca 0-2 pic.twitter.com/K2LzKOz9a9

Barcelona, ​​who suffered their seventh loss in the championship this season, froze at 73 points in second place.

Barcelona appeared very faintly during the match that was held in its stronghold, Camp Nou, in the absence of motives for its stars in the meeting, after the Catalan team ensured obtaining the runner-up in the arrangement of the competition earlier.

On the contrary, Villarreal players were enthusiastic, serious and keen to collect the three points in order not to stray from the continental competitions next season.

Summary of the "Villarreal" double against "Barcelona" in their last matches for the 2021/2022 season 📺#BarçaVillarreal 0-2 pic.twitter.com/fh0w20rhKw

After qualifying for the Champions League semi-finals this season, by ousting Juventus and Bayern Munich during his career, coach Unai Emery's team entered the last week, threatening to miss all continental competitions.

After determining the first six places already, Villarreal started the day in seventh place, one point behind chasers Athletic Bilbao, who faced fourth-placed Seville at the same time.

Villarreal needed to win at the Camp Nou to raise his score to 59 points, and to ensure qualification for the Conference League against Barcelona, ​​the runner-up, who played the match without a goal and showed a little seriousness.

Pedraza opened the scoring in the 40th minute with a perfect shot after receiving the ball from Dani Parejo, and Moi Gomez confirmed the victory in the 54th minute with a powerful shot from close range after a mistake by Adama Traore while trying to clear the ball.

Athletic Bilbao lost 1-0 to Seville to finish the competition in eighth place, 4 points behind Villarreal.

🇪🇺⚽ #LaLigaSantander clubs that will participate in European competitions next season

Real Betis and Real Sociedad finished the season in fifth and sixth places and qualified for the European League.

Summary of the superiority of "Seville" over "Athletic Bilbao" in their last matches for the 2021/2022 season 📺# SevillaFCAthletic 1-0 pic.twitter.com/6rTOphQ2IF

Alaves, Levante and Granada were relegated to the second division.

Summary of the tie "Granada" and "Espanyol" through which he officially bid "Granada" the top league 📺# GranadaEspanyol 0-0 pic.twitter.com/CRa0e2E65Y

Moroccan star Yassine Bounou, the Seville goalkeeper, won the Zamora award, which is given to the goalkeeper with the least goals in the Spanish League, by receiving 24 goals in 31 matches.