Al Jazira coach, Marcel Kaiser, expressed his happiness with the level of the duo, Ali Mabkhout and Zayed Al Ameri, during the Al Wahda match in the Abu Dhabi Derby yesterday evening, in the 25th round of the ADNOC Professional Football League, stressing that their brilliance is in the interest of the national team. 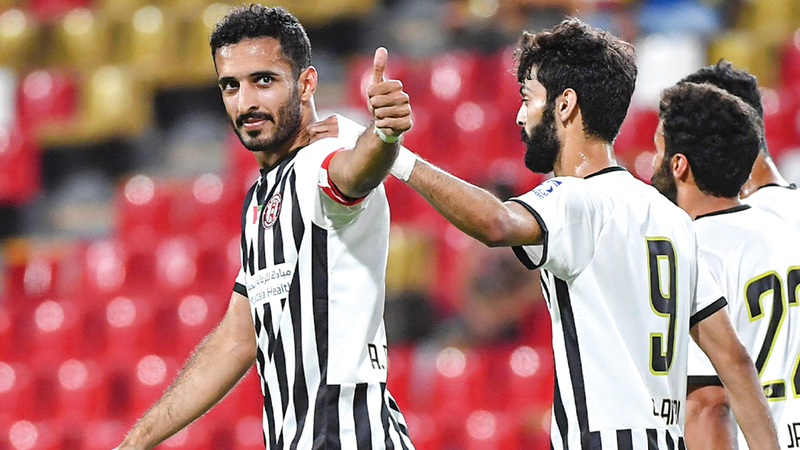 Mabkhout scored Al Jazeera's only goal and shined despite the loss against Al Wahda.

Al Jazira coach, Marcel Kaiser, expressed his happiness with the level of the duo, Ali Mabkhout and Zayed Al Ameri, during the Al Wahda match in the Abu Dhabi Derby yesterday evening, in the 25th round of the ADNOC Professional Football League, stressing that their brilliance is in the interest of the national team. Before his important match against Australia, in the first step out of two on the way to reaching the World Cup, reducing at the same time his 1-2 loss against Al Annabi.

Al-Abyad is awaiting a heavy-caliber confrontation on the seventh of next June, when it will face its Australian counterpart at Ahmed Bin Ali Stadium (Al-Rayyan Stadium) in the Qatari capital, Doha, for the Asian play-off qualifier for the playoff match in the 2022 World Cup final qualifiers.

The brilliance of the duo, specifically striker Ali Mabkhout, instills a state of confidence in the technical staff of the national team led by Argentine Rodolfo Arruabarina, as Mabkhout led the "White" to beat "Kangaroo" in the last official confrontation between the two teams, which was held within the quarter-finals of the 2019 Asian Cup. When he scored the only goal of the match, which gave the team the qualification for the semi-finals, and was the reason for the exclusion of Australia from the tournament.

The Dutch coach said in the press conference after the Al Wahda match, the match in which Ali Mabkhout scored the team’s advance goal: “Al Jazira players undoubtedly feel resentful of the result, because they like to win all matches. For me, I was pleased with the level presented by the players Ali Mabkhout and Zayed Al Ameri.” During the match, their brilliance was a positive point in the national team’s interest, before its match in the Asian playoff.”

The winner of the Asian play-off match qualifies to meet in the international play-off with the fifth-placed Peruvian team in the South American qualifiers, and the winner will join the teams of Group D, which includes France, Denmark and Tunisia, in the last leg.

Regarding the result of the loss, which lost the team the opportunity to officially finish the league in fourth place, the coach said: “For me, I am satisfied with the performance of the players during the match, despite the loss. We fought the confrontation in the absence of a large number of players, which forced us to pay the With a group of young elements, unlike the unit team, which was full-fledged.”

• Gregory: Al Wahda was the better party for most of the match

Al-Wahda coach, French Gregory, described their victory as deserved, considering in press statements that "Al-Annabi" was the best party in most of the match.

Al-Wahda rose up in the second half, scoring two goals in two minutes to turn the table on Al-Jazira, transforming its delay with a goal to win 2-1.

The coach expressed his happiness with the performance they presented during the confrontation, and said: "We created many chances, but we scored two chances because we were not lucky in the rest. I am happy with the players for the spirit they showed and turning their loss into a win."