“Superheroes are waiting for new adventures”: Dziuba announced his departure from Zenith in the form of Deadpool

Artyom Dzyuba said that he would not renew the contract with Zenit. He announced his decision in a video in which he appeared in the form of Deadpool. The club thanked the striker and wished him good luck. According to media reports, the 33-year-old football player can continue his career both at home and abroad. According to the ex-midfielder of the Russian national team Diniyar Bilyaletdinov, the striker is unlikely to go to Europe due to the geopolitical situation, and the well-known coach Igor Kolyvanov believes that the best scorer in the history of the national team is able to play in any RPL team. 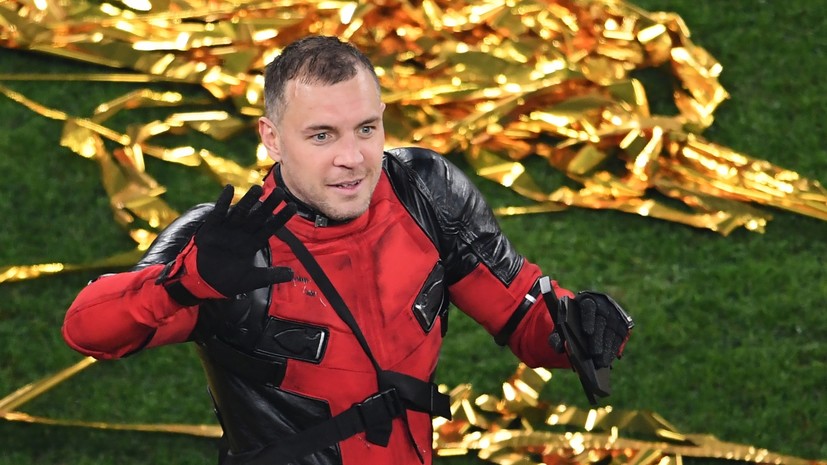 The day after the end of the Russian championship, an end was put to the transfer saga of Artyom Dziuba.

On May 22, in the morning, the striker announced on his page in the Telegram channel that he would not pass on the contract with Zenit expiring in the summer.

And he said goodbye to the club in a rather unexpected way.

The football player shot a video in which he appeared in the image of Deadpool that the fans remember.

In it, he addressed everyone with whom he crossed paths over the years of performances in St. Petersburg.

“Many thanks and greetings to my partners - without them I would not have been able to achieve such great and small heights.

In Zenit, I became the top scorer in the history of the RPL - it's awesome how cool, ”the striker recalled.

Separately, he noted the city itself, emphasizing that it will forever remain in his heart.

“Thanks to all the assholes for the compliments, you constantly gave strength and forced to overtake you on turns, but it would be boring without you.

Superheroes are waiting for new adventures.

He also thanked the coaches, but never once mentioned the current coxswain of blue-white-blue Sergei Semak.

But the footage with Andre Villas-Boas is inserted into the video, during which the footballer moved to Zenit.

In turn, the club published a rather stingy news on the official website, in which it limited itself to listing all the achievements of the attacker during his performances in St. Petersburg.

It seems that such a prominent performer could have been seen off brighter.

“Zenit Football Club thanks Artyom Dziuba for a brilliant game, incredible dedication, goals, assists, records and for our common victories!

Thank you for everything, Artyom, ”the message reads.

Problems with playing time and skirmish with Semak

The very decision of the striker not to renew the contract with the Petersburgers was not a surprise.

RT sources back in early May reported that he did not intend to do this.

The reason was dissatisfaction with the decrease in playing time.

If in previous seasons the Russian regularly entered the field from the first minutes, then in the last season he began to increasingly stay on the bench.

In the summer, the veteran took time to get in shape, and Semak preferred him in the starting lineup of Serdar Azmun, who was supported from the flanks by Claudinho and Malkom.

In the fall, this trio played really brightly, and Dzyuba, despite the goals scored, still remained in the reserve.

Artyom did not hide his discontent and during the match with Dynamo, having upset the opponent after leaving the bench, he shouted at Semak.

He did not answer the ward at a press conference and it seemed that the conflict was avoided.

However, in the second part of the season, with the arrival of Ivan Sergeyev and Yuri Alberto, the position of the top scorer in the history of the RPL worsened even more.

Although Azmun left the team, the mentor chose to bet on the attack on the rookie duo.

Dziuba, after the winter break, got into the base in the meetings of the national championship only six times, and in the end he was completely content with the role of a reservist.

Only in the last round with Nizhny Novgorod did Semak give him the opportunity to say goodbye to the fans, not only releasing from the first minutes, but also giving the captain's armband.

According to the former midfielder of the Russian national team Diniyar Bilyaletdinov, the striker left the team absolutely in time.

He believes that at the moment the veteran is no longer so necessary for St. Petersburg residents.

“We see that they have enough margin of safety at the moment.

In my opinion, if Russian teams had the opportunity to play in European competitions, Artyom would be left.

He is an experienced football player and would fit for a clip, especially since he spent a large number of matches in them.

And without European cups, there was an understanding that there were enough attackers for the Petersburgers for their eyes, ”Bilyaletdinov emphasized in an interview with RT.

The well-known coach Igor Kolyvanov agreed with him.

In his opinion, the striker's age is his main disadvantage, and Zenit should give way to young Sergeev and Alberto.

“It is clear that Dziuba is used to playing in the first team.

He gave a lot to Zenit.

In the RPL, he was always one of the best on the field, scored a lot and led his partners.

But Artyom is already 33... In any case, the club is obliged to thank him for the years that the striker spent in St. Petersburg, because he scored a huge number of important goals, ”the specialist recalled.

For seven years in St. Petersburg, the striker really turned into a blue-white-blue legend.

In the list of Zenit's top scorers in history, he is second only to Alexander Kerzhakov (163).

In addition, he acted well in the underplay and assisted his partners 70 times.

At the same time, the striker cannot be called an athlete for internal use, because he scored 17 times in European competition.

And fans will forever remember his six goals in the Champions League group stage in 2015, when Zenit scored five wins and one draw and advanced to the playoffs from the top spot.

And far from always, the forward enjoyed the unlimited trust of coaches.

For example, under Roberto Mancini, he fell into disgrace and in 2018 was forced to go on loan to Arsenal.

But Dzyuba showed himself brilliantly in Tula, deserved to be included in the application for the home world championship and became one of the main characters of the tournament.

After that, he triumphantly returned to Zenit and spent several bright seasons.

Options in Europe and interest in RPL

Despite the fact that Artyom will turn 34 in August, he is still able to prove himself at a high level.

Firstly, age does not yet affect the health of the athlete.

For all the time spent at Zenit, he missed only 12 games due to various injuries and, at worst, was in the infirmary for three weeks.

The colossal load that has fallen in recent years has not hit him either.

For example, in the 2020/21 season, he took part in 34 meetings with Zenit and took third place in the team after Douglas dos Santos and Vilmar Barrios in the number of minutes spent on the field.

To them it is necessary to add regular departures to the Russian national team, where, under Cherchesov, the football player was also indispensable.

Perhaps the main intrigue is whether the striker will remain at home or decide on the first foreign voyage in his career.

In particular, information appeared in the media about the interest in him from the Serbian Red Star, Turkish Fenerbahce and the Hungarian Ferencváros, which is headed by Cherchesov.

But, according to RT experts, such a step is unrealistic.

"Red Star", I'm afraid, will not pull his demands.

And it is difficult to wait for proposals from the top 5 European championships, based on the geopolitical situation.

At the moment this is irrelevant.

Therefore, I think Dziuba will remain in the RPL.

The footballer knows the league very well and has a lot of experience,” Bilyaletdinov said.

Kolyvanov also supported him, saying that at that age it makes no sense to leave the country, and in Russia he would have enough options.

There are actually two teams playing in Serbia - Partizan and Crvena Zvezda.

I don't think he should go there.

The championship is much weaker than the Russian one, ”said the coach.

But there is no doubt that Dzyuba will be in demand in the RPL.

At the same time, the likelihood that he will sign a contract with the capital's top clubs is small.

In Spartak, they are unlikely to want to return the disgraced pupil, while Lokomotiv, Dynamo and CSKA have enough attacking lines, although a performer of this class would not interfere with them.

But Krasnodar has problems with forwards after the departure of John Cordoba.

Vladimir Ilyin did not pull the role of the main striker in the spring and scored only four times, and in the end he completely lost his place at the base.

Dzyuba will certainly be interested in trying himself in an ambitious project, especially since Sergey Galitsky has always willingly invited older players.

In particular, Roman Shirokov and Vladimir Bystrov defended the colors of the southerners at the end of their careers from the former Zenit players.

“It is clear that such a performer will be useful to any Russian team.

He is able to spend a few more seasons at a consistently high level.

You can remember how he went on loan to not the strongest teams and showed himself there too, ”said Bilyaletdinov.

However, the most interesting option is the arrival in Sochi.

The southerners took second place in the completed RPL season and strengthened their role as the second force in the national championship.

In the next, they may well try to throw down the gauntlet to Zenit, especially if he loses some of the leading legionnaires.

Dziuba, on the other hand, will be full of desire to prove, together with the southerners, that in St. Petersburg he was written off early.

Moreover, there are enough athletes in the team who have been noted in the roster of Petersburgers (Christian Noboa, Danila Prokhin, Artur Yusupov) and who are well acquainted with the attacker.

The signing of an agreement with Artyom will become especially relevant in the event of the departure of Mateo Casierra, who scored 14 goals in the Premier League and shared second place in the tournament scorers race with Dmitry Poloz.

According to media reports, the Scottish Glasgow Rangers are interested in the Colombian.

“I hope that in other teams Dzyuba will look as bright as in Zenit.

He remains one of the strongest forwards in the country.

Artyom still plays great with his head, drops the ball to his partners and is constantly aimed at hitting.

I have no doubt that he will have to go to court anywhere, ”Kolyvanov emphasized.