See how the map reader is forced to hold the door

Saturday's stage seven stages in Portugal's WC rally is underway and it is an exciting fight at the top between teammates Elfyn Evans and Kalle Rovanperä. 10.2 seconds separates the duo. Tough start, however, for Gus Greensmith and Swedish map reader Jonas Andersson, a puncture ruined the morning. 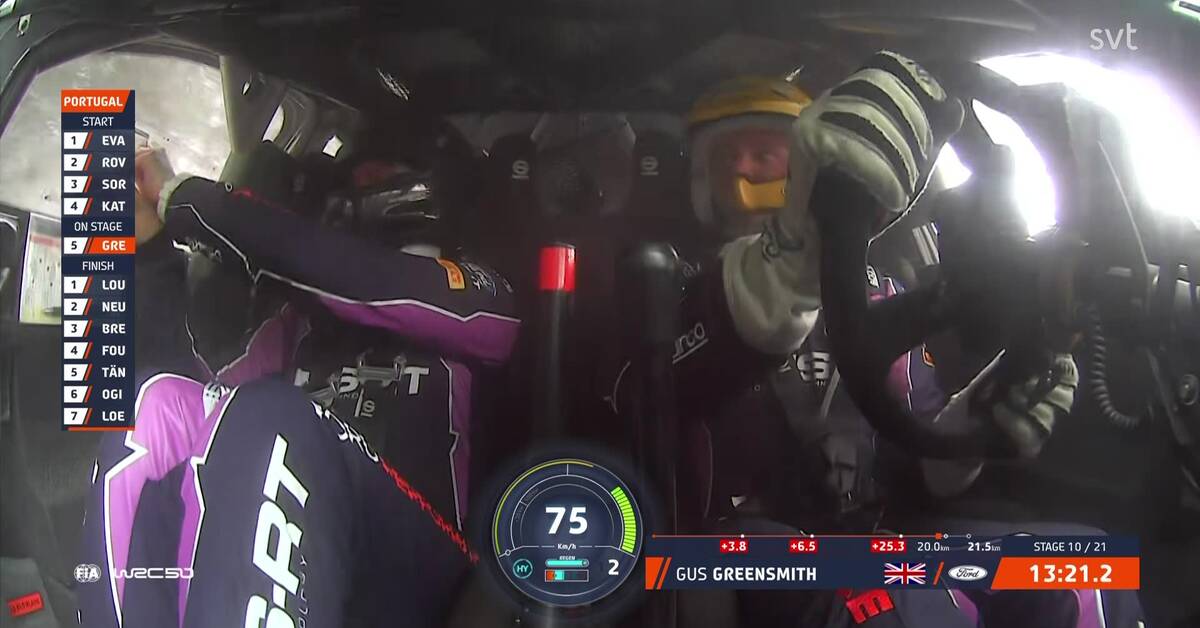 Elfyn Evans had a lead of just over 13 seconds before the day.

A lead he extended with an initial stretch victory on the first stretch of the day, just over 21 kilometers long Vieira do Minho.

It was the Welshman's fifth straight victory so far in the rally.

On the second stretch of the day, Rovanperä took the stretch victory and Evans' lead shrank.

In addition, incredibly even in the battle for third place.

Takamoto Katsuta has cut time ahead of former Dani Sordo all morning and only 1.7 seconds now separates them.

Nine-time world champion, Sébastien Loeb, has broken for the second day in a row.

He was forced to stop on SS11 to restart the car, lacked power.

Got the car started again but later broke with engine problems

Gus Greensmith and Swedish map reader Jonas Andersson had a challenging day yesterday in Portugal and were in fifth place, one minute behind the leader, before Saturday.

But the duo got a nightmare start with a puncture already on the first leg of the day.

In photos from the car, Jonas Andersson was seen holding the door after the broken tire probably opened the door.

- They were not worth this.

I feel a little sorry for them, it's Gus' favorite rally and he is so close to success.

Had a very strong start yesterday but then he encounters problems.

Hope he and Jonas can shake this off now and find speed again, says SVT Sports expert Jonas Kruse.

After WRC2 leader Andreas Mikkelsen was forced to break due to engine problems, Oliver Solberg started Saturday morning as fourth in the class.

Solberg was then out of service in the morning and got an extra time of 20 seconds, which meant that he lost time against third-placed Kajetan Kajetanowich.

Despite extra time, Solberg is challenging for third place.

The 20-year-old was second fastest on the first leg and followed up with his first leg victory this year in Portugal.

Teemu Suninen leads the class just over 57 seconds ahead of Solberg.

See highlights from the World Rally Championship in Portugal here