Marcelo's tearful farewell (or not) and Bale's absence: "Enzo, get your father out!"

The knees on the ground, the palms of the hands touching the grass and some tears in the eyes. This is how Marcelo received the final whistle of his last home game at the ... 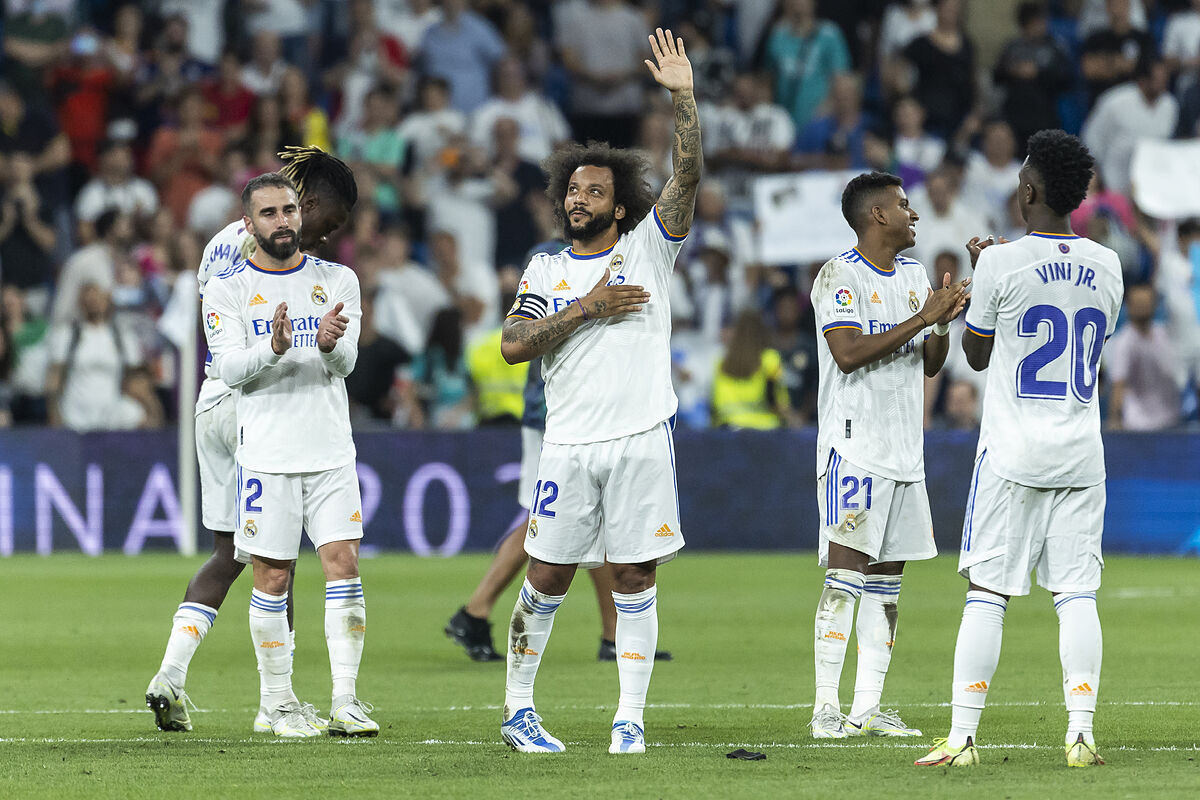 The knees on the ground, the palms of the hands touching the grass and some tears in the eyes.

This is how Marcelo

the final whistle of his last home game at the

The Brazilian, who signed in

, made his debut in

), his contract ends and it does not seem that he will renew.

, he has not yet decided if he will hang up his boots or look for new attractions in the world of football.

with his fans before the trip to

That and the beautiful

champion of the League

and the champion of the

Marcelo heard the applause of the public during the presentation of the players, when he went out to warm up the band and when he jumped onto the grass to play the

last 20 minutes of the match

After the duel, he received hugs from all his teammates and surrendered with a mutual gesture of praise to

has renewed another year with the Verdiblancos.

For Marcelo, the passage of time seems to have forced him to step aside a few years earlier, but he has the same affection for the fans that

"From Marcelo we are talking about a myth, a

legend of our club

It is normal for people to be fond of him for what he has given and his way of being.

But now we have a final and we have to be focused on that, then we'll see,"

Enzo, get your father out

!", the Animation Stand yelled at

, Marcelo's son, 25 minutes after the end of the match and when part of the stands had already left the Bernabéu.

paid attention to them and entered the locker room tunnel for the Madrid captain.

A few minutes later, with the seats completely empty, Marcelo jumped back onto the pitch to chat with

, who had gone out with their children and their partners.

I don't know if he has been fired

, we only know that his contract is ending. He is a legend, hopefully on Saturday we win another Champions League together," Courtois assured of the Brazilian, leaving the door open for a last-minute surprise.

Carlo Ancelotti showed himself in the same vein: "

He has not said goodbye yet

and he will be in the final as well."

Marcelo has not completely closed the door to a downward renewal and will wait several weeks for an offer from the board.

Already on the horizon, the Champions League final and, of course, the outcome of the future of

We are not talking about players who are not ours

. We feel great respect for him and for PSG. I repeat, it's time to think about the Champions League," added Butragueño.

Ancelotti: "Everything is clear to me"

Already at a press conference,

assured that he had "

" about the starting eleven and the game idea for the final against Liverpool.

"Everything is clear to me", he declared, before confirming that

"is fine" and will play the duel against the '

"Today we didn't need to take risks," he explained.

For the Italian, the key to the season has been that some players "who

" have not caused problems "if they did not play."

They have never lowered their arms

, the atmosphere has been spectacular in the locker room."

In addition, he praised

: "I was just commenting with him before the match that he made his debut in Madrid with me. His contract ends, he has had a fantastic career here, it has been very important.

Could he have done more? Of course he did

, but it has been a important piece.

Finally, he announced that

"will be fine for the final".

The Welshman was not at the stadium to say goodbye to the fans, but the coach defended him: "

He wanted to play if he was okay to say goodbye

, but now he has one last chance."