3 Arab referees and a historical presence for women.. FIFA chooses 36 referees to run the 2022 World Cup matches in Qatar

The “Road to Qatar 2022” project was launched in 2019, and the candidates underwent extensive preparations, before 36 referees, 69 assistant referees and 24 video referees were selected to manage the 2022 World Cup matches. 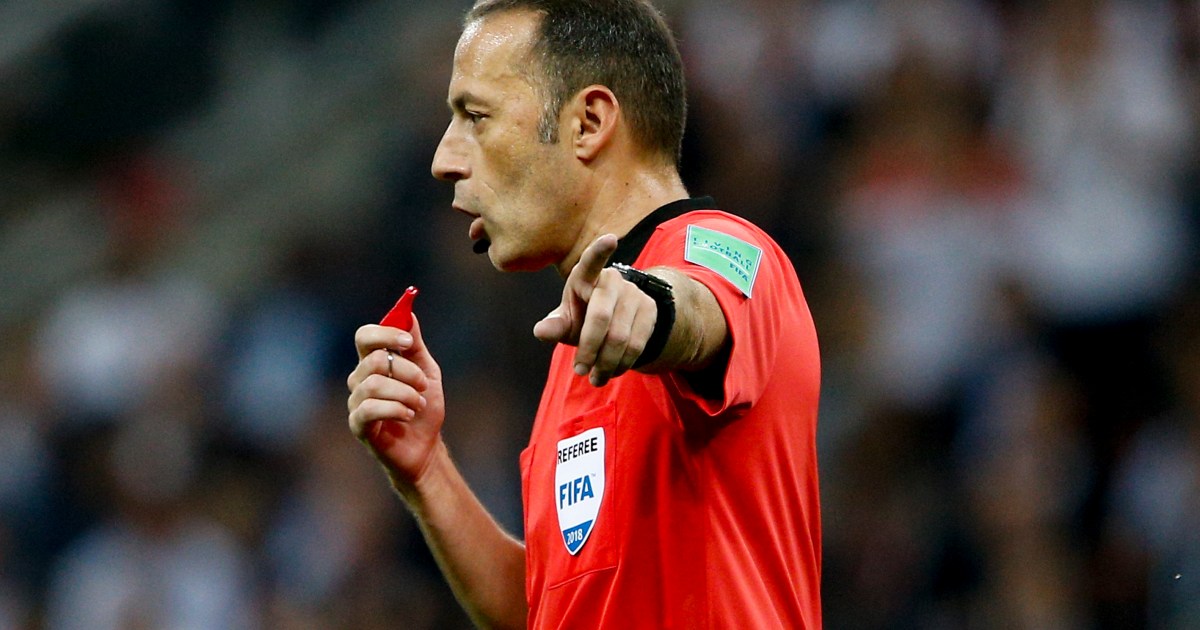 The FIFA Referees Committee has announced the names of match referees selected to officiate the 2022 World Cup matches in Qatar.

"36 referees, 69 assistant referees and 24 video referees were selected in cooperation with the six continental federations," FIFA said on its official website today, Thursday.

Pierluigi Collina, head of the FIFA Referees Committee, said: "As always, quality is the first criteria that we take into account. Similar or better in the Qatar World Cup in a few months.”

Arab referees in the World Cup 2022

The list announced by FIFA today, Thursday, included 3 Arab referees in the list of the main referees, and they are the Qatari Abdul Rahman Al-Jassem, the Algerian Mustafa Gharbal, and the Emirati Muhammad Abdullah.

Among the list of assistant referees, there are 7 Arabs, they are the Egyptian Mahmoud Abu Al-Regal, the Qataris Talib Al-Marri and Saud Ahmed, the two Emiratis Mohammed Al-Hammadi and Hassan Al-Mahri, and the Algerians Abdelhak Echiali and Qorari Muqran.

Referees preparation plan for the World Cup in Qatar

The "Road to Qatar 2022" project was launched in 2019 with more than 50 potential candidates from the arbitration teams, and they underwent extensive preparations, despite the fact that the Corona pandemic caused the suspension of activities for a long time.

Collina explained, "The epidemic affected our activities, especially in 2020 and 2021, and fortunately, the tournament was still far away, and we had enough time to prepare the candidates well, and we are announcing today in advance about these choices because we want to direct and work more firmly in The coming months are with our chosen referees, and our message is very clear: Do not stop building glory, keep working hard and prepare well for the World Cup.”

FIFA Refereeing Director Massimo Busacca said, “The match officials will have the necessary FIFA support because their readiness is critical. Thanks to the innovative tracking and support programme, FIFA referee mentors can supervise all match officials more intensively than in previous years. This makes us expect a greater improvement in refereeing for the 2022 World Cup."

Busacca added, "There will be individual programs designed specifically for these referees, especially with regard to their health and fitness, and we will monitor them carefully over the next few months, and we will give them a final assessment on the technical, physical and medical aspects with the aim of placing them in the best conditions before the start of the tournament in Qatar."

The selected match officials will participate in several seminars this summer (in Asuncion, Madrid and Doha) in order to review and analyze videos of situations that took place in real matches, and participate in practical training sessions with the players, which will be filmed and sent to the mentors for the participants to then receive their feedback and opinions .

"The most important points that must be focused on in preparation remain the protection of players, the reputation of the game, consistency and unity, reading the game from a technical and tactical perspective and understanding the mentalities of players and teams, despite that we cannot eliminate all mistakes, but we will do our best to reduce them," Busacca said.

Video technology in the 2022 World Cup

The FIFA statement confirmed that the video assistant technology (VAR) was implemented for the first time in the World Cup Russia 2018, and today, after 4 years, there will be a team of 24 video referees in Qatar, who are ready to provide their colleagues in the field with the necessary technological support.

Given the very limited number of member associations who applied VAR at that time, FIFA explained that all VARs in the World Cup Russia 2018 were chosen from Europe and South America, but today, after VAR is used in all major competitions in the world, we will see Video referees from Asia, Africa, Central and North America for the 2022 World Cup.

The Qatar 2022 edition will be the first in the history of the World Cup in which the FIFA Referees Committee will appoint 3 female referees and 3 assistants.

"We are very pleased to have Stephanie Frappart from France, Salima Mukasanga from Rwanda, Yoshimi Yamashita from Japan, along with aid Noisa Pak from Brazil, Karen Diaz Medina from Mexico and Catherine Nesbitt from the USA at the World Cup," said Collina.

Collina pointed out that "this is the first time in history that women have refereed some tournament matches, and this is only the fruit of the tireless efforts that were launched several years ago in order to publish female referees in FIFA tournaments for young men and adults, and thus we clearly affirm that everything that concerns us It's quality, not sex."

He added, "I hope that in the future, the presence of female referees in elite matches for the most important men's competition will be seen as a normal thing. They have the right to be in the World Cup because they play their roles constantly and at a very high level, and this is the most important factor for us."