Llull and his love story and records with the Final Four: "I had to stop him"

“Now you tell me that he is going to play his eighth Final Four... Honestly, then I couldn't imagine such a legend. I would lie, I could put medals on myself. He seemed very capable... 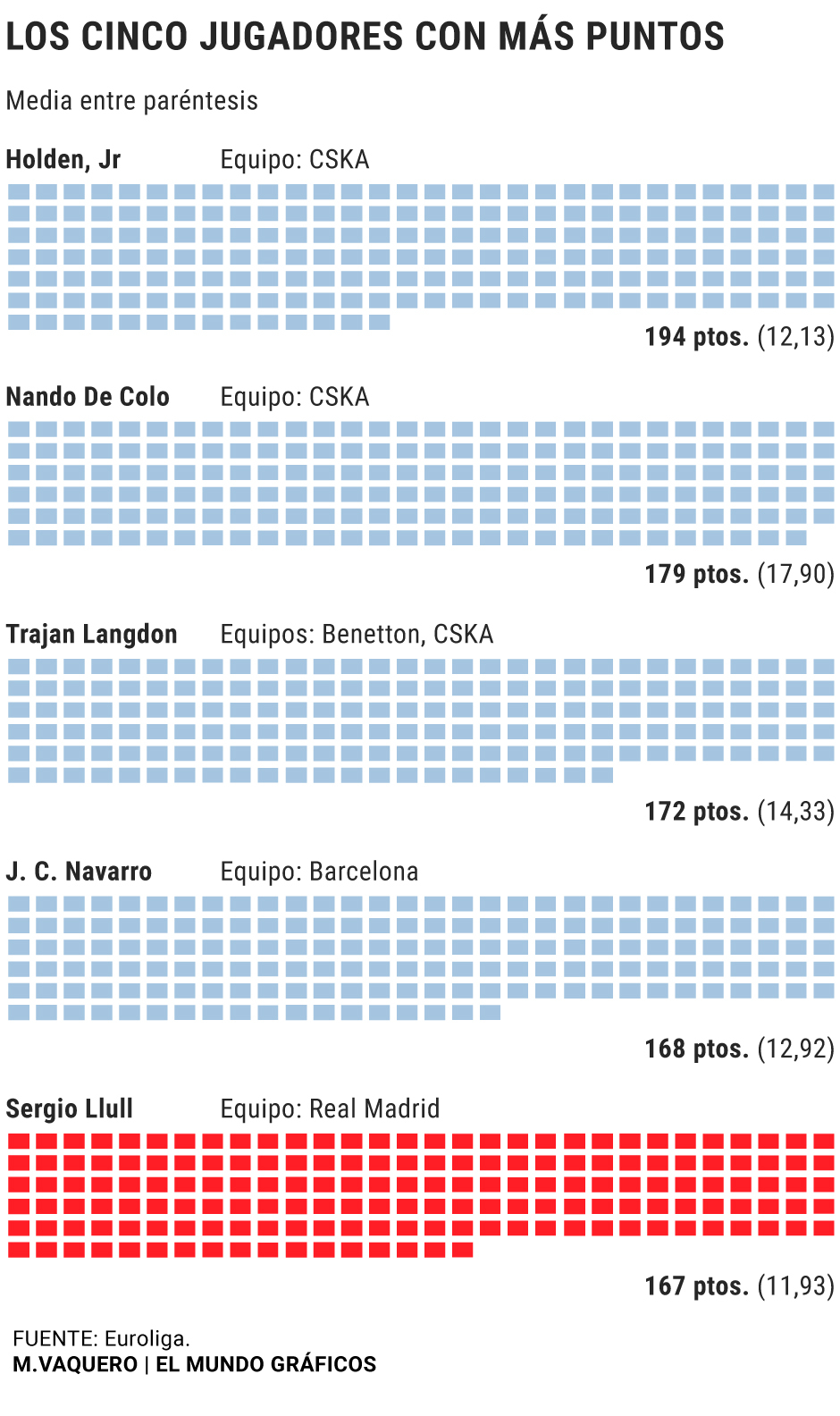 «Now you tell me that he is going to play his eighth Final Four... Honestly, then I couldn't imagine such a legend.

I would lie, I could put medals on myself.

He seemed very capable technically, but ... ».

In Belgrade, where Real Madrid won the Décima four years ago, that long-haired young man whom

found "pissed off and not playing" in the humble Ricoh Manresa, that "remora" who attended the team that just lifted the ULEB Cup will make history this week.

(Mahón, 1987), in this version that stands the test of time, continues to be the beginning and end of the team to which he swore eternal loyalty, his name among the greatest in the Euroleague.

When on Thursday (9:00 p.m., DAZN) he faces Barça in the semifinals, it will be his eighth appearance in the last 10 F4, the first Spaniard in that figure, in search of his 23rd title in white, one step away from a handful of records [see graphic], 27 points behind the top scorer (although if the FIBA ​​era were counted it would be

Llull's playground, which also opposes his third crown, perhaps the most unexpected.

As unusual was that first Final Four 11 years ago in Sant Jordi that the coach with whom he debuted remembers.

«It was a very young group, when we went out it seemed like a party.

Against Maccabi it was a tough defeat, but Llull played the next game [for third place, against Montepaschi Siena] knowing that this shirt had a historic need, with a sense of leadership.

All the signs that identified him as a leader were already there (they lost again, but he scored 23 points »,

, current Trento coach, the assistant of the fled

with which Real Madrid returned to a summit meeting 15 years later.

Players with the most final four points

It was the first notch, painful, pure learning for what was to come, two lost finals until the first title in 2015. But already in that 2011, the Balearic was starring in one of the most amazing stories of Spanish basketball, since he had barely reached Madrid by a hunch, by the good eye of those who risked.

«I had faced him in training and he was just another guy.

Then we saw him at Esparraguera, a small team where Manresa sent the remoras", recalls Joan Plaza, who convinced

to sign that young man of whom the myth said that as a cadet he had scored 71 points in a game with La Salle Mahón.

«Why are you going to sign another point guard?

Because I wanted it basic.

It was a song in the desert, it was anticipating the future.

It was risky because it didn't make much sense. And then what happened happened."

It happened that Llull, despite the competition with

, gradually made room for himself.

You told him, go defend

and the guy got involved.

Without complexes, "continues Plaza, who was recently reminded by Sergi himself that he forced him to cut his hair, that he soon made friends with

That he participated in the League title that was going to complete a round year, that 2007. And that, at the turn of the summer... «The boom, when for the first time we beat the NBA.

That match was played at the Palace and it was already 'Llull, Llull, Llull'.

But what if this shit was barely playing in Manresa four days ago?

He was a bomb in the team that made everyone more competitive and hooked the public... we were not wrong », praises the Catalan coach, who polished his pearl.

He improved his shooting with

and his physique with

"He is a guy who has always liked basketball. There are players who play for punishment, because they are tall, for their salary. Sergi likes this, he enjoys training, traveling, playing. If he has an early impact and also goes to the team closer to the heart, as Madrid was for him... All that made him become a phenomenon".

12 days after those 17 points to the Raptors that fell in love with an NBA that he was going to reject, his debut in a Euroleague arrived in which he has 343 nights.

It was at the Abdi Ipecki in Istanbul, against Ulker.

"I had to tread carefully.

The group had a very cool dynamic and had to be stopped.

Because it caused an immediate impact, but he couldn't make LeBron believe or make others see him as a threat.

Llull would not take long to raise his voice in the highest continental competition in which Madrid was not yet the protagonist.

With Messina and Molin on the bench, he put on his superhero cape to lift a game that they lost to Montepaschi by 11 in the third quarter.

He made 17 points in 11 minutes, including the final triple to win the basket average.

«Now everyone talks about his crazy shots in the hot moments.

But I already remember that game in 2010. This ability, that courage, this is Sergio, talent, energy and above all personality", admits a Molin who was impressed by Llull's commitment to say no to the Rockets and who admires today's veteran .

"His maturity, his intelligence, every season playing finals, medals with Spain... he changed his role, but his leadership is the same."

And he concludes, without hesitation: «He is a legend of the Euroleague».

Because Llull, at 34 years old, is still the man to give the ball to when it burns.

This same season, despite his own and the team's winter bump, he has ended up showing his strength.

He comes to Belgrade with an average of 8.7 points, but above all with two exhibitions against Maccabi in that quarter-final series that changed everything.

17 points and five triples in the second, 18 and six assists in the final in Tel Aviv.

«He has been learning to help the team, because injuries to players who depend so much on their physique, so disruptive, are complicated.

He has taken good advantage of maturity », analyzes Plaza, who still predicts a beautiful sunset for him:«

you are managing him well, not overexploiting him.

She has between three and four years to continue at the highest level in Europe ».

And that returns, as a vital lesson, to that impossible genesis that changed the life of the boy who played with his brother Iván in that hoop lined with insulating tape in his room.

«People who come or come from shit, value all things more.

He knew that he had to seize the opportunity.

There are players who are in small clubs and he thinks they are not going to amount to anything.

Llull is a very good example that by persevering, persevering you end up getting what you deserve».