Thanks to a masterful Kevin Trapp, Eintracht Frankfurt overcame Glasgow Rangers on Wednesday after extra time (1-1, 5-4 on penalties) in the Europa League final. The German club... 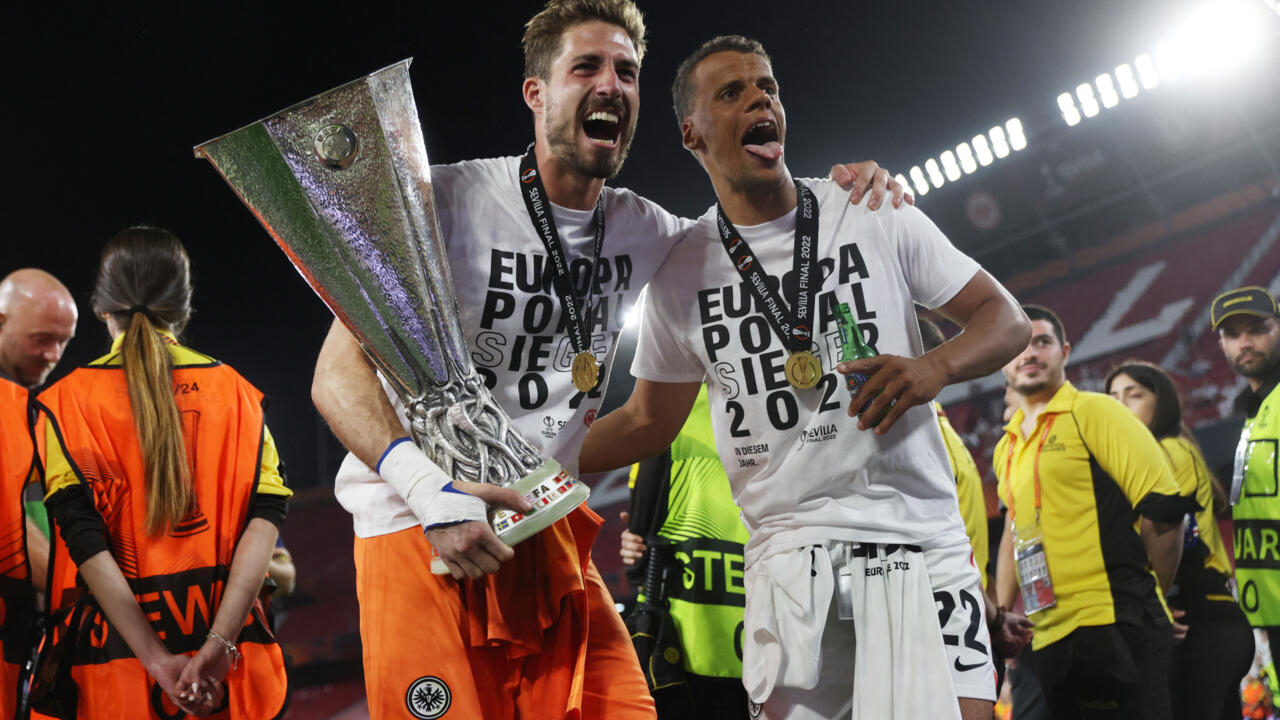 The "Eagles" soar over Europe!

After a fiery night, Eintracht Frankfurt won the second Europa League in its history on Wednesday May 18 in Seville by beating Glasgow Rangers 1-1, 5-4 on penalties in the final, thanks to its hero Kevin Trapp, imperial.

After making two decisive saves at the end of extra time, first in front of Ryan Kent (118th) then on a free kick from James Tavernier (120th + 2), Trapp stopped the attempt of Welsh veteran Aaron Ramsey during the penalty shootout on goal to crown his team.

Rafael Borré, who already scored the equalizer for the "Eagles" in the 69th minute after Joe Aribo's opener (57th), sealed the victory for the Germans with a final converted shot on goal, to conclude the session perfect of the "Eagles".

But it is indeed the former German goalkeeper of PSG who became the hero of the evening during the penalty shootout, to offer the trophy to Frankfurt, which thus succeeds Villarreal, crowned last year, in the winners of the C3.

A historic achievement for Eintracht, which notably defeated FC Barcelona and West Ham to reach the final, and end its odyssey crowned with laurels in the hot Andalusian night, in front of the nearly 44,000 supporters of the Sanchez-Pizjuan stadium.

Because since the UEFA Cup gleaned in 1980, the "Eagles" had never known a continental coronation.

Oliver Glasner thus became the first Austrian coach to lift a European trophy since the legendary Ernst Happel in 1983. For the Scots, on the other hand, the disillusion is immense: the "Gers" had also been waiting for fifty years to regain European glory, since their European Cup Winners' Cup in 1972.

Small consolation: defender and captain James Tavernier will still be the first defender in history to finish top scorer in the Europa League, with seven goals.

But the "white wall" deployed by the German supporters wore another color in the cages of Eintracht: all dressed in orange, Trapp kept his own afloat when necessary, during the few moments of weakness of his team. .

And if the match was hung until the end, it could have degenerated from the start: from the 5th minute, John Lundstram played a ball a little too high, and his crampons touched the front of the skull of the captain of Eintracht's Sebastian Rode, who lay down on the lawn, immediately putting his hands on his bloody wound.

Long cared for by trainers, he will return to the lawn with a blue and white bandage around his head, after changing his blood-soaked jersey.

We will have to wait half an hour to see the first Scottish attempt: a ball rolled up from the left by Joe Aribo which will not catch the frame but which forced Trapp to extend with his whole body, just before a cool break essential.

Because the thermometer exceeded 40 degrees in Seville during the day on Wednesday.

And it was the supporters of the two teams who set fire to the stands, with songs, drums and tifo for the Germans.

The Pizjuan inferno really took shape after the locker room, when the "white wall" of German supporters lit red smoke.