Winner of the 10th stage of the Giro, Biniam Girmay became at 22 the first Eritrean cyclist to win a stage of a Grand Tour. An important stage for African cycling and confirmation… 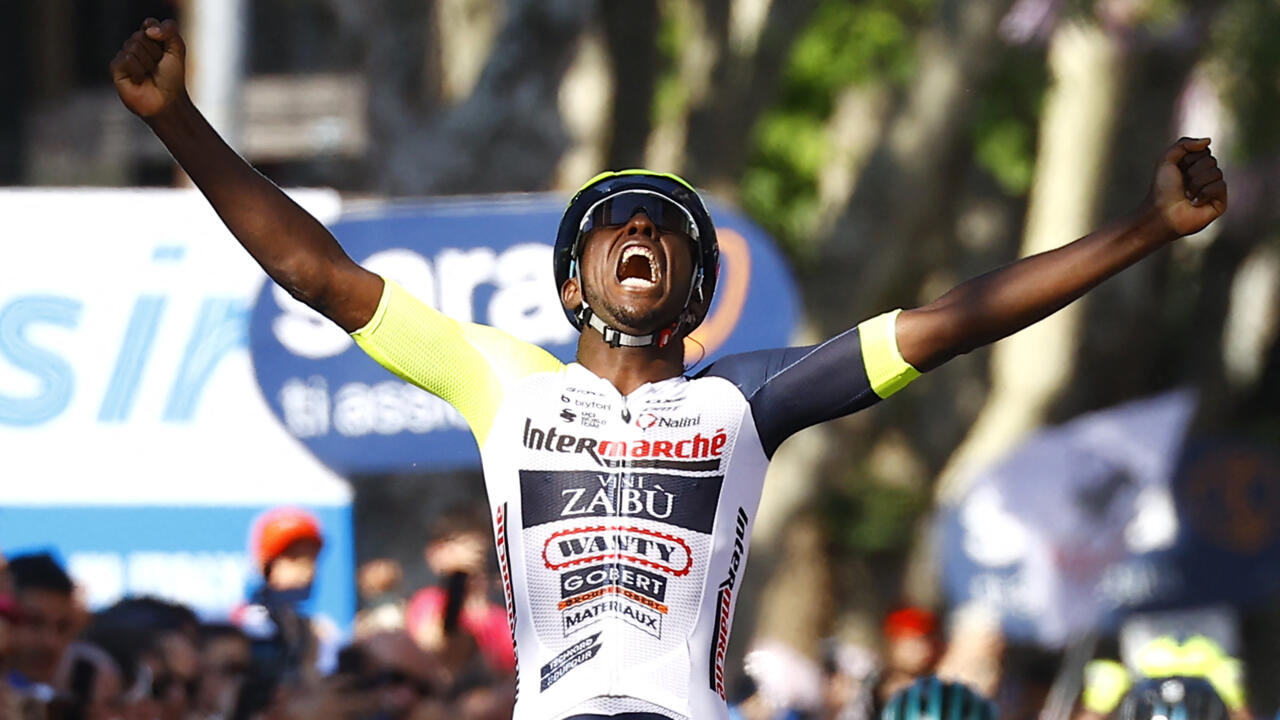 Biniam Girmay continues to write the history of his country and of the African continent.

Less than two months after winning the Belgian classic Ghent-Wevelgem, the 22-year-old rider shone again, this time on the roads of the Giro.

On Tuesday May 17, he won the 10th stage of the Tour of Italy, between Pescara and Jesi, thus becoming the first black African rider to win a stage on a Grand Tour.

While the peloton had shrunk due to the multiple difficulties concentrated in the last 100 kilometers of the stage, Biniam Girmay confirmed the extent of his qualities.

Supported by his Intermarché-Wanty-Gobert Matériaux team, he first reduced his competitors' attempts to break away before winning the sprint in a small committee.

"Tell me who you beat, I'll tell you which winner you are", it is customary to say in cycling.

Biniam Girmay already has everything of a great winner: just behind him, the Dutch phenomenon Mathieu van der Poel, grandson of Raymond Poulidor, gave a thumbs up when he got up a few meters from the finish line to salute the performance of his younger brother.

He then hugged him to congratulate him.

"Every day, we write a new story," rejoiced Girmay, his face still smiling.

"I can say that I am happy and grateful," added the Eritrean, who is a sporting honor for his country.

Biniam Girmay had been flirting with victory since the start of the Tour of Italy: 2nd behind van der Poel during the first stage, 4th during stages 3, 6 and 8, and 5th during stage 5.

A prestigious victory on a Grand Tour which rewards a course with regular progression and imbued with precocity.

If he started cycling as a teenager in Eritrea by imitating his cousin, Biniam Girmay quickly caught the eye of recruiters.

He joined the World Cycling Center (CMC) for his second junior year, in 2018. This structure, created by the International Cycling Union, aims to support talents from emerging countries.

That same year, he already made a name for himself by becoming a triple African junior road champion, winning the gold medal in the road race, the time trial and the team time trial.

From then on, he multiplied the prestigious victories for his young age, winning in particular in front of the Belgian phenomenon Remco Evenepoel during the Aubel-Thimister-Stavelot.

In 2019, he became the first rider born in the 2000s to win a professional race by winning the third stage of the Tropicale Amissa Bongo in Gabon with the Eritrean selection.

He continues with a victory in the Tour of Rwanda and a fifth place in the queen stage of the Tour de l'Avenir, a real junior Tour de France.

Biniam #Girmay makes African #cycling history by becoming the first black rider from Africa to win a stage on a Grand Tour#GiroDItalia pic.twitter.com/WXudrofLBV

Enough to encourage the French professional continental team Nippo Delko One Provence to recruit him.

His performances during his first year with the pros earned him the title of African runner of the year by a jury chaired by Bernard Hinault.

He then made the leap into the World Tour – the highest division in cycling – with Intermarché-Wanty-Gobert Matériaux.

Before winning Ghent-Wevelgem, he had already stood out at the end of September at the world championships by winning the silver medal in junior, a first for a black African rider.

Biniam Girmay is now a pioneer in a sport where dark-skinned African runners have long been absent, with continental victories often won by white runners – like South African Daryl Impey, “Robbie” Hunter , or even the "white Kenyan" Christopher Froome.

Biniam Girmay is the heir to a long line of Eritrean riders who excel in cycling.

Also passed by the World Cycling Center, Daniel Teklehaimanot was the first of them.

In 2015, he became the first rider from sub-Saharan Africa to wear the polka dot jersey for best climber in the Tour de France.

He also won the Dauphiné mountain classification in 2015 and 2016.

But since this "spark", his compatriots struggled to settle at the highest level.

"I was wondering if Eritrean cycling was not a bit running out of steam," said Michel Thèze, former director of the CMC, in an interview with AFP.

The success of Biniam Girmay "comes at the best time, it will give a second wind", he believes.

"It's a confirmation of the great potential that exists there."

Wedged between the high plateaus of the Horn of Africa and the Red Sea, Eritrea is conducive to the practice of cycling.

With a large part of the country nestled between 1,800 and 3,000 meters above sea level, runners develop exceptional physiological capacities.

And the practice of cycling, inherited from Italian colonization between 1885 and 1941, is deeply rooted in Eritrean culture.

Competitions are frequent there, and "of a high level", underlines Michel Thèze.

In Africa, the Eritreans are also crushing the competition: since 2010, they have won eight of the eleven individual continental titles on the road, and ten titles in the team time trial.

Several teams rely on these talents, such as EF Education-EasyPost with Merhawi Kudus or Cofidis with Natnael Berhane.

Their success arouses enormous fervor, in Eritrea and in the diaspora.

"Those who succeed are stars", confirms Michel Thèze.

They act as ambassadors for this country which only appears in the news for its refugees fleeing a regime accused of violating human rights, its involvement in the conflict in Ethiopia or, recently, its opposition to a resolution of the UN calling for an end to the fighting in Ukraine.

In 2015, on their return from the Tour de France, Daniel Teklehaimanot and Merhawi Kudus marched through the streets of jubilant Asmara and were received by President Issayas Afewerki.

"As a child, I watched the Giro d'Italia on television"

Also celebrated by his compatriots who immigrated to Europe at the start and finish of the races, Biniam Girmay had insisted before the start of the Giro on the particularity of the Tour of Italy for Eritrea, because of the old colonial links between the two countries. .

"As a child, I watched the Giro d'Italia on television with my friends. I went out cycling with the dream of one day being able to participate in a Grand Tour," said the Eritrean.

"With the team, we have set ourselves the goal of achieving a stage victory. If I am lucky enough to achieve this, I will become the first black African to win a stage in a Grand Tour. [..] It would mean a lot for my country, for the African continent and for cycling in general."

Ten steps later, the goal has already been reached.

But when celebrating his historic success on the ceremonial podium of Jesi, the young 22-year-old Eritrean inadvertently received in the eye the cap of the giant bottle he was to open.

An injury which prevented him from taking the start of the next stage and continuing his mano a mano with Arnaud Démare for the best sprinter's jersey.

This new first for a runner will therefore have to wait a little longer.

Once this incident is behind him, the future looks bright for the native of Asmara.

The young puncher probably has in the back of his mind the deadline for the 2025 world championships, which will be organized in Rwanda, a first for Africa.

What story would be more beautiful than seeing a runner from the continent raise his arms there?