Analysts: 6 technical and administrative points behind the superiority of Al Ain and its early victory in the league title

Sports analysts identified six technical and administrative points, which they described as behind Al-Ain’s superiority over its competitors, and early deciding the ADNOC Football League Shield title, three rounds before the end of the competition, noting that these points represented good planning, and a clear strategy since the beginning 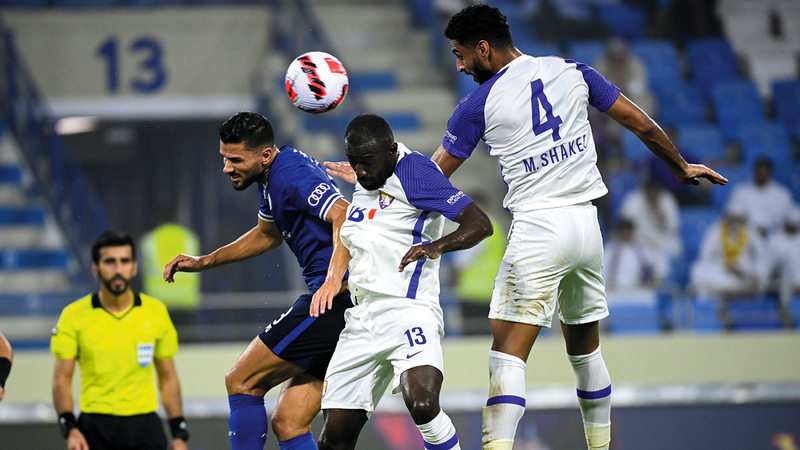 They confirmed that the most prominent of them are the good choices of players, the mark of Rebrov, and the brilliance of Laba Kodjo

Analysts: 6 technical and administrative points behind the superiority of Al Ain and its early victory in the league title

Sports analysts identified six technical and administrative points, which they described as behind Al-Ain’s superiority over its competitors, and early deciding the ADNOC Football League Shield title, three rounds before the end of the competition, noting that these points consisted of good planning and a clear strategy since the beginning of the season. In addition to the imprint of the Ukrainian coach Rebrov, who succeeded in employing his players optimally, which brought back to the eye his strong personality, and led him to achieve this season’s achievement, along with the good choices of players, whether they are foreigners, locals or residents, as well as the great brilliance of the Togolese striker. Laba Kodjo, who leads the league’s top scorer with 25 goals, is far ahead of his closest competitor, Al Wahda striker Omar Khribin, who comes in second with 14 goals, in addition to the presence of a strong bench to fill any shortage in the team, and the great administrative success of Al Ain Club management In providing the appropriate atmosphere for the team, noting that Sharjah ranks firstSecond after Al-Ain in terms of excellence in technical matters.

They told "Emirates Today" that "Al-Ain this season appeared in a very distinctive way, and in a remarkable way, and the image of Al-Ain was completely different from that in which it appeared last season, thanks to great efforts within the club, at the administrative and technical levels, and the entire system within the club."

Al Ain is currently leading the team's standings with 61 points, 10 points behind its closest rival, Sharjah, with only two rounds remaining to finish the league.

The former Ajman and Al Dhafra coach, and the Iraqi technical analyst, Abdel Wahab Abdel Qader, considered that the good choices for the players, as well as the distinguished elements, including Christian Guanca, Lapa Kodjo, Sufian Rahimi, Danilo and Rafael, and other distinguished players in the team, made the difference, and Al Ain led to this. The achievement, considering that Al-Ain had a surplus of players, even in the back line, in addition to the presence of high-level substitutes, pointing to the good strategy set by the coach, and that despite the team’s shortage in the absence of Laba Kudjo, he managed to win in his last match against Al-Nasr .

For his part, the former Olympic team coach and technical analyst, Ali Ibrahim, confirmed that Al-Ain this season arranged its affairs well, and the season started well by attracting a coach at the club's ambition level, Ukrainian Sergey Rebrov, who managed to create a strong team, In addition to the presence of foreign and national players at a high level, and the presence of a strong bench, in addition to the fact that the team’s players were always in form throughout the season, in addition to the presence of technical equipment and fitness trainers at a high level as well, stressing that this season there was solidarity among all the Ainawiya, representing In the administrative success, which in turn led to the success of the team, indicating that the administrative body in Al Ain always focuses on its work.

Ali Ibrahim added, "I think that Al-Ain this season was integrated in all respects, and for me, the Ukrainian coach of Al-Ain Sergey Rebrov put a clear technical imprint on the Al-Ainawi team, and there is a big difference between Al-Ain this season and Al-Ain last season."

The former coach of the Emirates and Ajman teams, the Egyptian Ayman Al-Ramadi, considered that one of the most important things that led to Al Ain’s superiority this season was the team’s tactical distinction, offensive vitality, and superiority in scoring goals, noting that in his estimation, these two are considered among the most important points of Al Ain’s distinction. , Which comes after in excellence, the Sharjah team.

Al-Ramadi added, "One of the things that led to Al-Ain's superiority was also the team's reliance on the system in general, and not only on individuals."

Al-Ramadi continued, "Although the team was suffering from shortages and absences in many cases, the last of which was the absence of Laba Kodjo in the team's last match against Al-Nassr, he was not affected by that."

Al-Ramadi stressed the great role played by the team's coach, Rebrov, especially in the tactical aspect, pointing out that Al-Ain's distinction will continue in the next season, if the team maintains this system, and the same method it followed in the current season.

1- Good planning, and a clear strategy from the beginning of the season.

2- The imprint of coach Rebrov, as he succeeded in hiring his players and creating a strong personality for the team.

3- Good choices of players, whether they are foreigners, citizens, or residents.

4- The great brilliance of striker Lapa Kodjo, who leads the league's top scorer with 25 goals.

5- The presence of a strong bench to fill any shortage in the team.

6- Administrative success by providing the appropriate atmosphere for the team.