Tour of Italy: with the Eritrean Biniam Girmay, history is written in the sprint

Winner of the 10th stage of the Giro, in Jesi, in a strong sprint which opposed him in particular to the Dutchman Matthieu van der Poel, the Eritrean Biniam Girmay became at 22 the first cyclist… 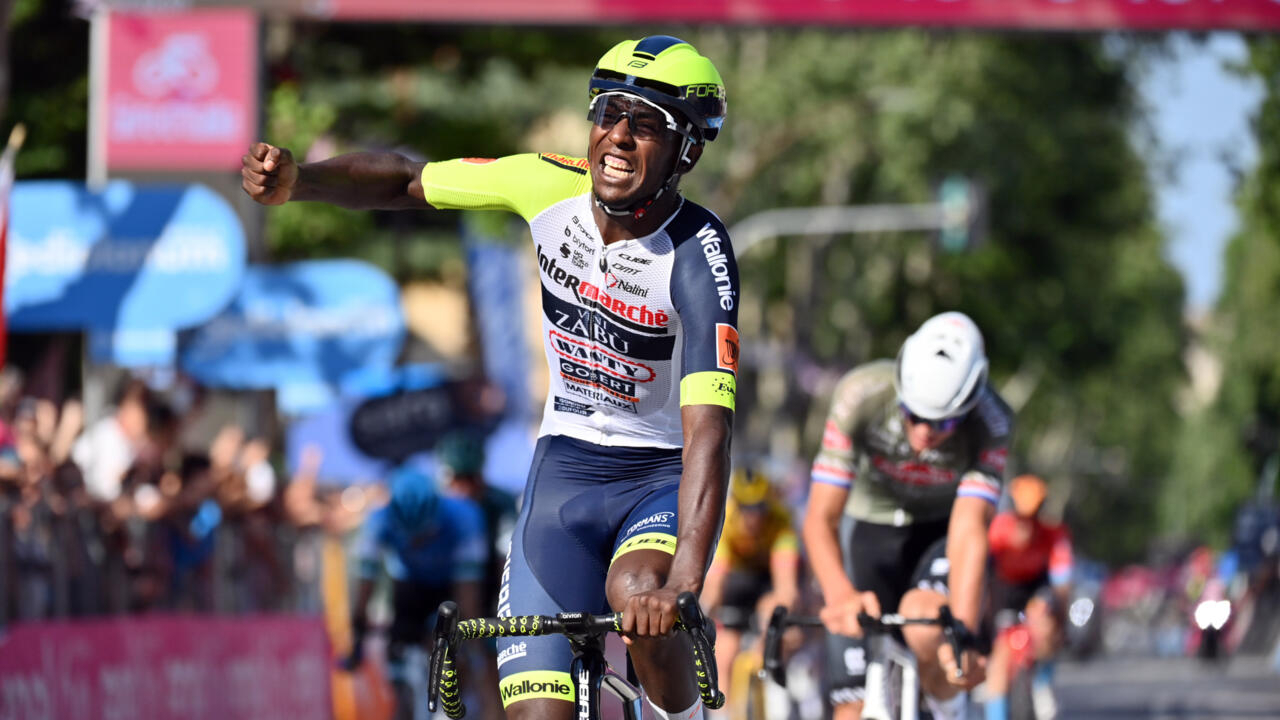 Tour of Italy: with the Eritrean Biniam Girmay, history is written in the sprint

Eritrean Biniam Girmay won his first victory in a Grand Tour on May 17, 2022. AP - Massimo Paolone

Winner of the 10th stage of the Giro, in Jesi, in a strong sprint which opposed him in particular to the Dutchman Matthieu van der Poel, the Eritrean Biniam Girmay became at the age of 22 the first black African cyclist to win on the one of the three Grand Tours (Italy, Spain, France).

The flash confirmation of an immense talent with still unknown limits.

From our special envoy to Jesi,

Since the start of the Giro,

the Italian sports director of the Intermarché-Wanty-Gobert team has received phone calls from all over the “Botte”, congratulations for this “Bini” which has amazed Italy and the cycling world.

Biniam Girmay, the gifted Eritrean, vice-world champion in title and winner of

at the end of March, had come to Italy to learn the science of the Grand Tours, today he is teaching the lesson.

It's pure talent, like Peter Sagan or Tadej Pogaçar, who were able to win from their debut in major races

With him, there's no need to repeat the same thing twice: he watches, he understands, he absorbs, in short, he's a champion.

A champion dubbed by his family: "

I am impressed by his sense of racing and placement

", slips the Dutchman Mathieu Van der Poel, superstar of the peloton and rival of the Eritrean on this Giro.

He was born on a bicycle

Winner, too, of a stage of the Tour of Italy, in 2016, the Estonian climber had noticed this fast and elegant rider on the Tour of Rwanda 2020, which they were then competing in two different teams.

“A rockstar” of the peloton

There are a lot of talented runners in Africa, but he was above the

Biniam doesn't have the biggest engine in the peloton, at the moment I don't see him doing long solo raids like Julian Alaphilippe, but he's tough.

It's very hard to make him

(unhook from his wheel, editor's note)

And if he manages to keep in touch until the sprint, Girmay, very gentle in life, turns into a real hunter.

Even when we play small games, he hates to lose

," says Belgian director Lieven Corthouts, who has been preparing a documentary on the fate of the Eritrean runner for five years.

Biniam Girmay at the microphone of RFI on the Tour of Italy.

Having become his confidant over time, Corthouts describes everyone as a "Bini" "

The pressure, however, is immense: a hero in his country, awaited like the messiah by lovers of African cycling and a new media darling in Europe, the Eritrean has gone from relative anonymity to great media light in a few months.

" summarizes his teammate, roommate and guardian angel in the peloton, Loïc Vliegen.

A "rockstar" who needs to take breaks from his tours.

As soon as he can, Biniam Girmay returns to see his Eritrean family, where the demands are less burdensome.

A diamond to protect

With him, the Intermarché-Wanty-Gobert team, where Girmay has earned its leadership stripes and general respect in less than a year, takes a lot of precautions.

His results, his personality, the wind of freshness and novelty that he brings to the peloton, are a gold mine for unearthing new financing.

His contract was recently extended for four years, an exceptionally long period in the world of cycling.

Logically, communication often puts it in the foreground, while trying to find the right mix: "

compared to sponsors, but you have to manage it, be careful not to burn it up in a year.

We try to sort through the requests, because Biniam is starting to feel the weight of it all, ”

Continue to grow while keeping his carelessness, his spontaneity, these precious natural qualities in the race and in a group: the balance is not easy to find, but we are talking about an extraordinary boy, a talent with reserves still unknown.

On certain points, such as nutrition, he's still a bit of an amateur, he doesn't always listen to advice,”

, “but on the other hand, that means he can still improve.

, Biniam Girmay loses his smile for the first time.

I want to do Bini

And that's enough for us.

Biniam Girmay uncertain for the rest of the Giro

Ironically, after his historic victory at Jesi, Biniam Girmay is uncertain for the rest of the Tour of Italy.

The young Eritrean prodigy injured his eye with the cap of the bottle of Prosecco he opened on the podium to celebrate his victory.

The rider from the Intermarché-Wanty-Gobert team was taken to hospital for further examinations.

In agreement with his staff, he will decide this Wednesday morning whether or not to continue the race.

The cork had slipped just past his eye.