Real Madrid, Barcelona and Seville.. the round of draws in the League

Real Madrid was satisfied with a 1-1 draw with its host Cadiz today, Sunday, in the 37th (penultimate) stage of the Spanish League, and the negative tie imposed itself on Barcelona's meeting with its host Getafe, while Atletico Madrid and Seville drew. 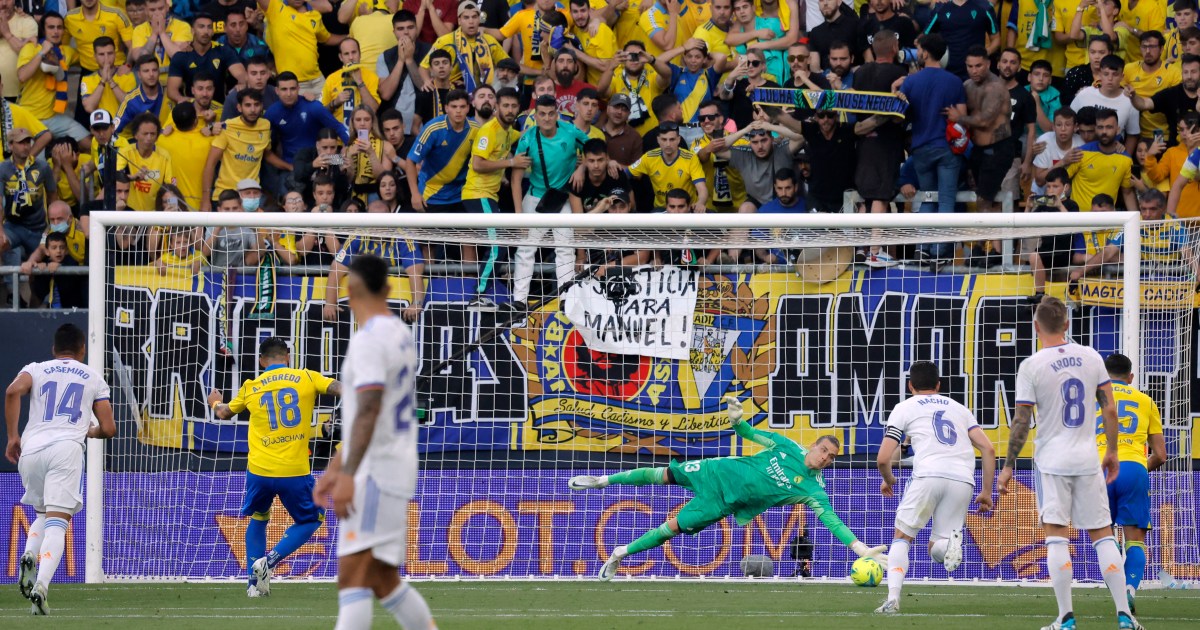 Real Madrid was satisfied with a 1-1 draw with its host Cadiz today, Sunday, in the 37th (penultimate) stage of the Spanish League, and the negative tie imposed itself on Barcelona's meeting with its host Getafe, while Atletico Madrid and Seville drew.

On the other hand, Deportivo Alaves was confirmed relegated to the second division, after losing 1-3 to its host Levante, who had also been relegated since the last stage.

At the "Ramon de Carranza" stadium, Real scored through Mariano Diaz in the fifth minute, but Robin Soerino scored the equalizer for Cadiz (37).

Cadiz missed the opportunity to collect the three points, which could have supported his position in his struggle to escape the specter of relegation, after his player Alvaro Negredo missed a penalty kick in the 61st minute.

Real Madrid's balance - which officially won the title this season earlier - rose to 85 points in the lead, while Cadiz remained in 17th place (third from the bottom), lagging behind in direct confrontations behind Mallorca, the 16th place (first survival centers). , equal to it in the same balance.

At the "Wanda Metropolitano" stadium, a 1-1 positive draw was held over Atletico Madrid and its guest, Seville.

Atlético raised its score to 68 points, to settle its position in third place in the championship standings, which qualifies for the Champions League next season, and Seville was also confirmed in the fourth place qualifiers for the continental championship as well, after raising its score to 67 points, where it outperformed its neighbor by 3 points. The arch-rival, Real Betis, is in fifth place.

In the event that Betis and Seville are equal in the same balance, the latter will decide matters in his favour, because of his superiority in the difference in the direct confrontations that took place between the two teams this season.

Seville had won two goals without a response against Betis in the first round, before repeating their superiority by beating them 2-1 in the second round.

After the match ended, Atletico fans bid farewell to Luis Suarez and Hector Herrera, after ending their career with the Spanish capital team this season.

On the other hand, Barcelona was held to a goalless draw with its host Getafe, as the two teams were unable to find the net during the two halves of the match, only to get one point.

Barcelona, ​​which ensured its rise to the Champions League next season, remained in second place with 73 points, while Getafe's tally rose to 39 points in 14th place.