Mohammed bin Zayed..Sponsor of sports and the river of giving for athletes in the UAE and the world

Over the past decades, Emirati sports have received a lot of support, attention and care from His Highness Sheikh Mohamed bin Zayed Al Nahyan, President of the State, as His Highness has always been keen to push young people forward, urging them to excel and represent the country in the best image in external forums. 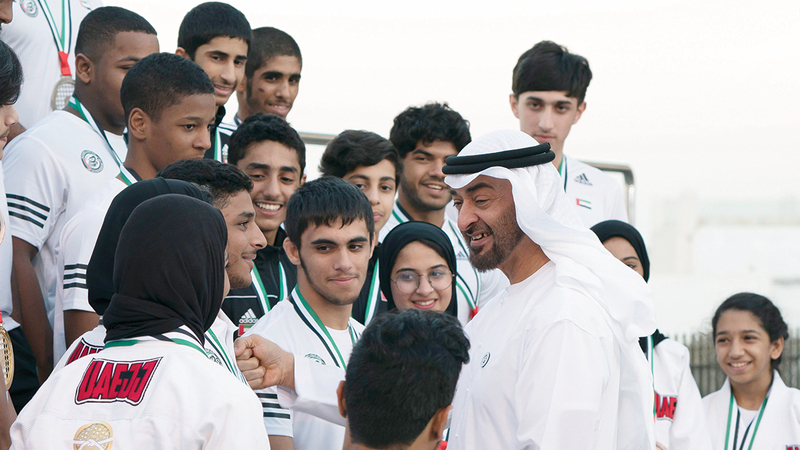 Officials: His Highness' support made the country a destination for the stars... and a role model for leadership and inspiration

Mohammed bin Zayed..Sponsor of sports and the river of giving for athletes in the UAE and the world

Over the past decades, Emirati sports have received a lot of support, attention and care from His Highness Sheikh Mohammed bin Zayed Al Nahyan, President of the State, as His Highness has always been keen to push young people forward, urging them to excel and represent the country in the best image in all foreign forums, as well as His Highness' reception of stars and heroes, his honoring and his words of stars were the most prominent motives for them and others to give without limits in order to obtain this honor again.

Supporting the sports sector in the country remained a priority among its priorities, as the umbrella of its giving included the normal and people of determination, alike, in the pursuit of achieving advanced positions in various fields of competitions regionally, continentally and globally.

Over the past years, His Highness has been keen to create the best sports environment to discover and refine talents and manufacture stars and champions with the highest internationally approved quality standards, out of his full confidence in the capabilities of the sons and daughters of the Emirates, and his firm belief that investing in young people and new generations is the best investment to preserve the gains of the past, and to contribute Active in building a strong, young, pioneering and inspiring future state.

His Highness has always affirmed, through actions and practices, that the state will spare no effort in supporting sports and providing all the ingredients for its advancement and development to raise the state's flag on the global podiums.

His Highness’s thought, initiatives and actions had a prominent role in improving the conditions of sport, raising its levels of performance, and benefiting from science and technology in achieving sustainability in excellence, achievement and honorable representation of the country.

Sports officials in the country unanimously agreed that His Highness' support and interest in sports played a major role in making the UAE a destination for world stars, a home for their creativity, and a role model for leadership and inspiration.

• His Highness has been keen, over the past years, to create the best sports environment for discovering and refining talents and creating stars and champions.

• His Highness always affirms, through actions and practices, that the state will spare no effort in supporting sports, to raise the state's flag on the global podiums.

• His Highness' reception of stars and heroes, his honoring and his words to them were the most prominent motives for them and others to give without limits in order to obtain this honor again.

Al Falasi: UAE sport will prosper under the leadership of His Highness

Dr. Ahmed Belhoul Al Falasi, Minister of State for Entrepreneurship and Small and Medium Enterprises, President of the General Sports Authority, First Vice-President of the National Olympic Committee and Head of the Executive Office, confirms that the support and interest of His Highness Sheikh Mohamed bin Zayed Al Nahyan, for the sports sector has achieved many gains and achievements, and constituted a case of The constant challenge of self among athletes, to raise the flag of the homeland and rise on the podiums.

He added that the people of the Emirates always put His Highness's words before them in all forums and entitlements as a motive for sporting excellence and excellence.

He pointed out that "the sport of the Emirates in the country will grow more prosperous and advanced under the leadership of His Highness, especially since everyone senses His Highness's keenness to communicate closely with all athletes, listen to them, learn about their levels and follow up on their results."

Al Falasi expressed his sincere wishes to His Highness the President of the State for continued success, excellence and wellness in the path of leading the blessed homeland.

Engineer Azza bint Suleiman, Assistant Secretary-General for Administrative and Financial Affairs of the National Olympic Committee, praised the support and generous follow-up of His Highness Sheikh Mohamed bin Zayed Al Nahyan, for sports and athletes in all forums, entitlements and occasions, and His Highness’s constant guidance to support them in their path and their lofty mission to represent the nation.

Bint Suleiman expressed her pride in the pioneering role played by His Highness Sheikh Mohamed bin Zayed Al Nahyan in supporting the sport of the Emirates, which makes the UAE sport a difficult number and places it in the ranks of the advanced countries in sports, noting that His Highness's vision and follow-up led many sports to the world and access to Podiums in various international tournaments and events.

The Assistant Secretary-General for Administrative and Financial Affairs of the National Olympic Committee stressed that the UAE sport is on the right path to achieve many gains and achievements, and to continue the path of excellence in the coming period, especially in light of the great interest it receives from the rational leadership.

Issa Al-Hazami: Mohammed bin Zayed is the best successor to the best predecessor

Issa Hilal Al-Hazami, Chairman of the Sharjah Sports Council, affirmed that "His Highness Sheikh Mohammed bin Zayed Al Nahyan is the best successor to the best predecessor, and that all the achievements that have been achieved will be added to everything that increases and multiplies them and makes us proud and happy in them, especially since His Highness is from the source of Zayed and his works." And his crafts, as well as his qualities, virtues, qualities and traits, which were and still are the talk of far and near in various parts of the earth.

Al-Hazami stressed that "his imprints are on sports and athletes are not hidden from anyone."

He added: "His Highness was and is still very keen to communicate with the masses before the leaders, because of his belief that the mass base in its comprehensive and broad sense is the basis of any success that can be achieved in sports, and personally I do not forget his role in the construction of the Ainawi castle with its local and international achievements, and the successive booms achieved by the Emirate of Abu Dhabi By hosting many international and international tournaments, and I remind His Highness with appreciation and gratitude the launch of the idea of ​​the Zayed Charitable Marathon, to be an Emirati humanitarian message to the world.”

Saeed Hareb, Secretary-General of the Dubai Sports Council, considered that His Highness Sheikh Mohamed bin Zayed Al Nahyan combines the qualities of leadership and example, and has always worked for the advancement of the nation and the enhancement of its gains in all fields, including the sports field, which, thanks to the support and patronage of His Highness, has achieved many achievements. It has consolidated the country's position at the global level, and enabled the people of the country to achieve sporting achievements at the level of competition and organization, and to create the sporting future regionally, continentally and globally.

He said: "The white hands of His Highness extended to all areas of sports work at the level of competition, empowering national cadres in all fields, and constructing world-class sports facilities. His Highness also supported all national clubs, and His Highness's support and directives resulted in the country hosting many international championships.

Aref Hamad Al-Awani, Secretary-General of the Abu Dhabi Sports Council, stressed that the generous support of His Highness Sheikh Mohamed bin Zayed Al Nahyan, for the march of development and sports development, contributed to making important historical achievements for UAE sport at all levels and levels, and led it to the forefront of the global sports scene, both on the one hand Organizing elite international sporting events or achieving sporting achievements.

Al-Awani stressed that the great progress achieved by UAE sport with the support of His Highness extended to all fields and levels, until the Emirates became the first and preferred destination for international sports federations and institutions, in light of its advanced and integrated sports infrastructure, which indicates that the wise leadership places sports and athletes set her eyes.

He added: "The capital, Abu Dhabi, has become the capital of international sports and a platform for meeting champions and the world's elite athletes. It has also contributed greatly to the development and spread of many sports and games not only in the UAE, but all over the world."

Muhammad bin Hazam: His Highness is a wise sports leader

Mohammed Abdullah bin Hazam Al Dhaheri, Secretary-General of the Emirates Football Association, affirmed that "the great support that sports in general, and football in particular, receive from His Highness Sheikh Mohammed bin Zayed Al Nahyan has contributed to establishing a solid sports base and making the Emirates a destination for stars." The world, teams and teams,” noting that His Highness is a wise sports leader, who encourages giving and pushes athletes to the podiums in all games and team and individual sports.

The Secretary-General said: "His Highness's wise directives and his attendance of matches and various sports activities are evidence of His Highness' continuous support for sports and the nation's youth, and this support is evidence of the importance of sports in the life of Emirati society."

Bin Hazam valued His Highness' unlimited support for sports, his wise guidance, and his reception of achievers, stressing that His Highness's support has consolidated the position of Emirati sport on the continent and internationally, and made it prominent on the global map.

He stressed that the UAE, thanks to His Highness' vision, has become the favorite place for teams and teams from different continents of the world.