Al Wahda returns from Ajman with “a new disappointment” .. the bleeding of points continues

Al Wahda returned from Ajman Stadium with a new disappointment, and continued to bleed points, after falling into the trap of a 2-2 draw against Orange, in the match that brought them together yesterday at Ajman Stadium, at the opening of the 23rd stage of the ADNOC Professional Football League. Registration 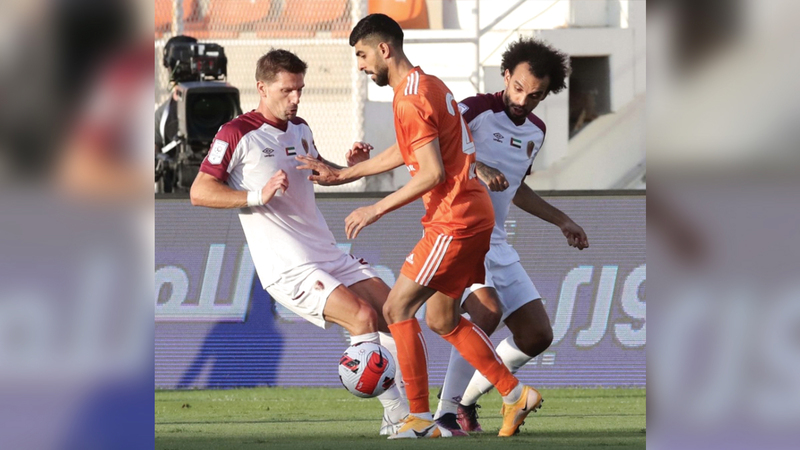 He lost two important points in the fight for second place

Al Wahda returns from Ajman with “a new disappointment” .. the bleeding of points continues

Al Wahda returned from Ajman Stadium with a new disappointment, and continued to bleed points, after falling into a 2-2 draw against Orange, in the match that brought them together yesterday at Ajman Stadium, at the opening of the 23rd stage of the ADNOC Professional Football League.

Tunisian Firas Belarabi opened the scoring for the hosts from a penalty kick (62), and Portuguese Fabio Martinez equalized for Annabi (76), then Brazilian Leandro Spadacio returned three minutes later and gave his team the lead, then Ismail Matar tied (90 + 3).

The beginning of the first half was equal between the two teams in possession, but Al-Wahda was the most dangerous in opportunity, and was able to score the goal of the advance through Omar Khribin's shot, had it not been for the brilliance of goalkeeper Ali Al-Hosani, who succeeded in removing the first danger from his goal to a corner kick «11». .

Ajman's danger focused on the counter-attacks, and one of them was the left-back, Walid Al Yamahi, who managed to threaten Mohammed Al Shamsi's goal with a right-footed shot, which settled in the hands of the goalkeeper "15".

Al-Wahda raised its rhythm in the last part of the first half, and was close to the opening through Omar Khribin, who hit a ball that passed along the left post.

Al Wahda tried to make up for what it missed, so it entered the second half with a clear offensive tendency, and got a fixed kick from the edge of the box. Omar Khribin played it from over the human wall, but the crossbar raised its voice, and tackled the ball on behalf of the Ajman goalkeeper «49».

Al Annabi continued his pressure on the Al Hosani goal, and Martinez missed a new opportunity, after he dribbled around three of the orange defenders, but he finally shot in the stands!

And the suffering of the unit on the field increased, after Ajman received a penalty, as a result of Abdullah Saleh being obstructed by Khalil Ibrahim, Firas in Al-Arabi hit it, and executed it successfully to the left of the goalkeeper.

Al-Wahda tried to return to the match through some offensive changes made by the French Gregory, which enabled their Excellency to equalize from a ball distributed by Martinez, deceived goalkeeper Ali Al-Hosani and settled on his left.

Walid Azzaro missed an irreplaceable opportunity to realize the progress again for the owners of the land, after a ball distributed by Firas Al Arabi, which passed through the goalkeeper with the goal wide open, to be placed by the Moroccan striker over the crossbar «77».

However, substitute Leandro managed to score from his "Azaro" distribution, to evade the goalkeeper and score an interesting goal.

With the last breath of the match, Ismail Matar managed to equalize, with a surprising shot from outside the box.