"Emirates Al-Youm" learned that Al Ain Football Club did not despair of the possibility of convincing the team's coach, Ukrainian Sergey Rebrov, to renew his contract, which expires in early June, in light of his desire to return to his country after the end of the current season, despite the successes he has achieved. Through 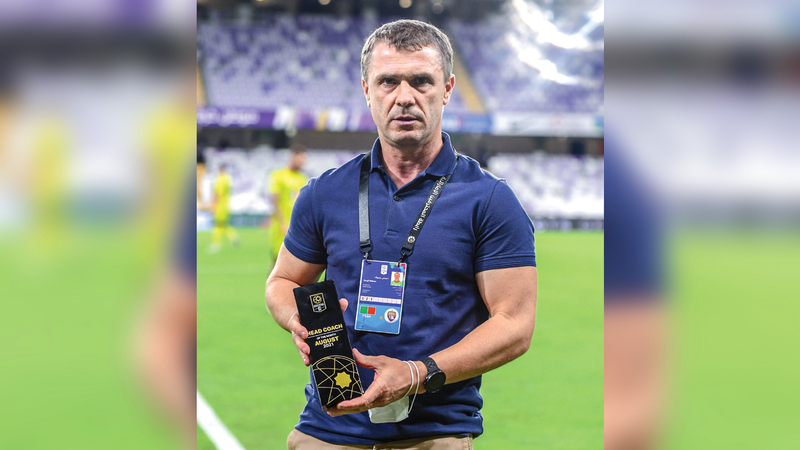 His mission with the “leader” ends early next month

"Emirates Al-Youm" learned that Al Ain Football Club did not despair of the possibility of convincing the team's coach, Ukrainian Sergey Rebrov, to renew his contract, which expires in early June, in light of his desire to return to his country after the end of the current season, despite the successes he has achieved. During his leadership of the "leader" and his approach to achieving the league title, which is the second title after the Professional League Cup, as only three points separate him to win the League Shield, while the management believes in the coach that he is able to implement the five-year project of building a team that crowns the AFC Champions League title for the time The second in the club's history.

Al-Ainawiya's desire to renew the contract does not clash with financial details, but coach Sergey's insistence on returning to his country, which is witnessing a war with Russia that has entered its third month, in order to stay with his family, despite the absence of any offers from Ukrainian clubs, as the local league has been suspended since last February .

Al Ain administration, led by Dr. Matar Al Darmaki, is making desperate attempts with coach Rebrov to continue with the "leader", especially since the latter was able to restore the team's position among the league clubs by building a group of young and experienced players, and his style of managing matches and his ability to bring out the best of the players. It was a reason for his success, especially after he obtained a heavy inheritance from his Spanish predecessor Pedro Emmanuel.

Retaining the services of coach Rebrov is a cornerstone of the Ainawi project, which seeks to build a strong team within five years to achieve the AFC Champions League. He gave confidence to the young duo, Muhammad Abbas and Khaled Al Balushi, who entered the starting line-up.

Over the past three seasons, and specifically since the departure of former Croatian coach Zoran Mamić, the Ain administration has been looking for a coach capable of keeping pace with aspirations, and Rebrov showed his success early, as he was able to equalize the best start for Al Ain in the history of his participation in the professional league by winning the first four consecutive rounds. , registered in the name of Zoran.

The statistics speak of coach Rebrov's successes, as he is still monopolizing the award for the best coach offered by the Professional League since the beginning of the current season, by winning it seven times in a row, after collecting 1,835 points, surpassing the coach of the Al-Jazira team, the Dutch Marcel Kaiser, who has 1,236 points. And the coach of the Bani Yas team, the Romanian Daniel Isila, who scored 1207 points.

Last August, the coach was close to ending his career with the "leader", to take over the leadership of his country as a replacement for the Ukrainian coach and star Andriy Shevchenko, whose mission with the team ended, after the Ukraine team exited the quarter-finals of the European Championship, but things did not witness a happy ending. For the coach who stuck to continuing with the "violet".

Rebrov, who is the only Ukrainian among all the ADNOC Pro League coaches, is in a state of confusion, as he is busy with his family and his country in light of the war that his country is witnessing with Russia, while at the same time focusing on fulfilling his duty towards his club, which currently leads the ADNOC Pro League competition with a score 55 points, and a heavy-caliber match awaits him tomorrow evening against Al Jazira in the "Classico Abu Dhabi", in the 23rd round, a match in which he will guarantee the title if he wins.

The coach, Sergey Rebrov, spoke to the Irish newspaper, The Independent, in mid-March, during which he said: “I cannot talk about football, we are not even thinking about football now, we are thinking about protecting our country, I am very proud of the people and soldiers who are trying to save our country. We are on the right side, I have a job here, but as soon as my season is over I will go home to be with my people, I will go as soon as possible.”

• The coach insists on returning to his country, which is witnessing a war with Russia, and staying next to his family.

• Maintaining Reprove is a cornerstone of a strong team building project over five years.