Rumors about Trusova and Kondratyuk's romance and Tutberidze's trip to the USA: what is being discussed in the world of figure skating

The fans suspected that a romantic relationship was developing between Alexandra Trusova and Mark Kondratyuk. Athletes spend their holidays in Dubai in the company of Kamila Valieva and Maurice Kvitelashvili. Alina Zagitova also went to the sea, but so far she has kept the place of rest a secret. Eteri Tutberidze decided to come to Boston to her daughter Diana, Elizaveta Tuktamysheva restored the quadruple sheepskin coat, and Evgeny Semenenko performed at the ice show for the first time after a fall and concussion. What is discussed in the world of figure skating - in the material RT. 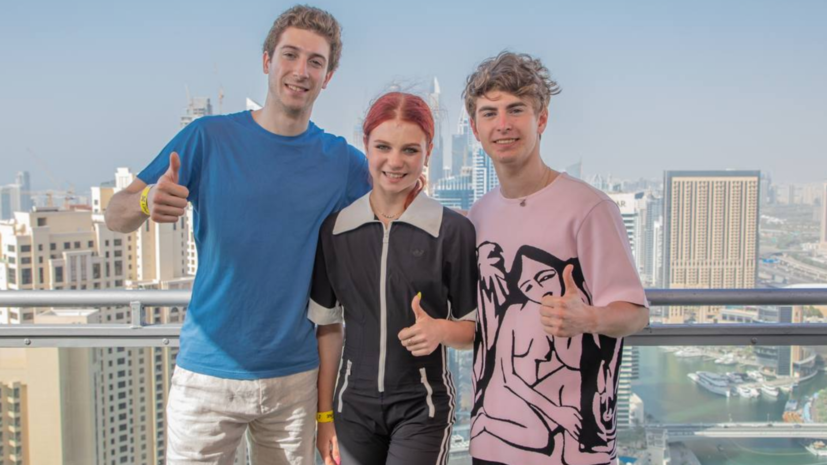 In the world of figure skating, it's the off-season.

Most of the athletes have gone to different parts of the world and share photos and videos of a well-deserved rest on social networks.

So, Alexandra Trusova, Kamila Valieva and Maurice Kvitelashvili, who train under the guidance of Eteri Tutberidze, went to Dubai as a friendly company.

For several days in the Emirates, the athletes managed to ride a yacht, visit the desert, and some even tried a zipline - an extreme descent along a steel cable from one of the Dubai skyscrapers.

“Impactly descended from the 42nd floor,” Kondratyuk wrote under the video of the flight in his Telegram channel.

Together with the Beijing Olympic champion, Kvitelashvili and Trusova were photographed at the launch pad of the zipline, but if Maurice also shared a video from the descent on social networks, Sasha did not post a similar video, so it is not known whether she decided to take a risky step or not.

Kamila Valieva was delighted with her stay in the UAE.

“The first part of my journey has come to an end.

Unusual and so beautiful!

I want to come back here, and I will definitely do it, ”the athlete wrote in the Telegram channel.

Meanwhile, a heated debate erupted on the network regarding a possible romance between Alexandra and Mark.

At first, the reason for the discussion was a photograph that appeared in one of the public, in which a girl and a young man, similar to Russian figure skaters, are very indistinctly visible.

In the picture they are holding hands.

Answering the question on her Telegram channel if Trusova and Kondratyuk meet, she wrote: “Now yes.”

According to her, they are just good friends.

At the same time, the athletes periodically posted videos of each other in their personal accounts, as if teasing the curious public.

The skaters themselves put a certain point on the issue of their relationship, almost simultaneously publishing joint photographs, in which instead of a signature, emoji in the form of a heart flaunt.

Zagitova on the mysterious island

At the same time, the athlete arranged a quiz in the Telegram channel, inviting subscribers to guess the place of her future vacation.

Among the proposed options were the Maldives, Mexico, the Seychelles and the Dominican Republic.

“I am already on the island.

I will have the third plane, the second transfer.

So wish me good luck and strength.

But it was worth it, I can say in advance, ”Alina gave a hint.

Upon arrival, she shared a video from the terrace of her room: right in front of her pool, and a little further, beyond the strip of the beach - the blue sea.

The skater also showed how on the very first day of her vacation she went to play tennis, but has not yet succeeded in a new sport for herself.

I tried,” Alina wrote, adding a laughing emoticon to the message.

Tutberidze went to the USA to visit her daughter

Eteri Tutberidze, meanwhile, is sent to the USA - to her daughter Diana Davis, who performs in ice dancing with Gleb Smolkin.

This was announced on Twitter by the authors of the podcast The Skating Lesson.

It is noted that the famous coach will visit Boston, where Davis and Smolkin will stage the program for the new season under the guidance of the famous French choreographer Benoit Richaud.

The news of Tutberidze's arrival in the United States caused a wave of indignation among local figure skating fans.

Under the corresponding tweet, a lot of aggressive comments were collected against the Russian coach with calls not to let her into the country.

The reason for this was the story of Valieva's positive doping test, which became known during the Beijing Olympics.

According to American experts, and with their filing and local fans, the responsibility for taking banned substances by a minor figure skater - which, by the way, has not yet been proven - should lie with the coach.

It remains to be hoped that Tutberidze will not face real manifestations of aggression in the United States.

And Davis and Smolkin, meanwhile, said that their vacation was over and it was time to return to training and the regime.

“We got tanned, rested and gained strength for new achievements,” Diana and Gleb wrote in a joint account on Yandex.Zen.

Elizaveta Tuktamysheva once again confirms her unofficial title of the Empress of Russian figure skating.

The 25-year-old athlete, during a training camp in Armenia, restored the quadruple sheepskin coat, which she tried to perform a year ago.

She hastened to share her new achievement on social networks, and the famous coach Alexei Mishin became the author of the video, which was published by the world champion.

- the specialist commented on the work of his pupil.

Tatyana Tarasova enthusiastically reacted to the return of the element to Tuktamysheva's arsenal, noting that this is an achievement for any single skater, "and especially for Lizochka."

“Just a beauty, she got her way!

I am not surprised that Tuktamysheva is learning new elements at this age.

It just amazes me!”

The athlete herself jokingly noted that she was inspired to perform the quadruple jump by the fourth consecutive victory of Zenit in the RPL.

“But I immediately admit that if the team wins the fifth championship, then I won’t be able to support it with a five-piece sheepskin coat,” the skater noted with a laugh.

By the way, having returned from the training camp, Lisa attended the match of her favorite team with Khimki, which the Petersburgers played already in the rank of champions.

“The best decision for today is to go to the stadium with Nastya Skoptsova and Stanislava Konstantinova.

Watch the game of your favorite Zenit.

The guys have already become champions, so they could just relax and enjoy the game in such comfortable places.

Zenit, congratulations on your win!

And with the championship again!”

— wrote the athlete in one of the social networks.

Khudaiberdiyeva is not ready to perform a strip act

In particular, about the famous demonstrative production of Tuktamysheva to the song Toxic by Britney Spears, where the skater at one point takes off her jacket and remains in a revealing top.

“She gets high from her body and does not consider it something bad and indecent to show her beauty.

Why would anyone stop her from doing this?

The main thing is that you feel good.

If it's not illegal, do whatever you want.

This is art,” Khudaiberdiyeva told Sport24.

However, the silver medalist of the junior world championship herself admitted that she was not ready to perform a similar number.

“This is purely my position.

It is to undress, that is, to be first dressed, and then undressed - this is a little too much.

I would be afraid to do so.

Not because of the reaction, but just because I would be uncomfortable.

But it’s the fact that I come in a jacket, and then, to the cool song Toxic, I start to undress ... I’m ready to go to the demonstration dance in the top.

But no more, ”said the athlete.

The athlete first appeared in public after a terrible fall during the Evgeni Plushenko show in St. Petersburg in mid-April.

Then the skater got a concussion and spent nine days in the hospital.

Immediately after discharge, the athlete was allowed only light training without skates, but gradually his health improved, and he began to skate carefully.

According to the athlete's coach Tatyana Mishina, Evgeny did not want to end his performance in the season on such a sad note as a fall and injury, so a joint decision was made to perform in the show.

The athlete needed a positive experience, and Evgeny coped with the task.

He performed for the St. Petersburg public his short program in a lightweight version - without a triple axel and quadruple jumps.

“I think he rolled successfully, with soul and with mood.

It is important that he is back in the ranks, ”Mishina emphasized after the show.