Video .. Barcelona snatches victory against Betis and guarantees qualification for the Champions League

Defender Jordi Alba scored a goal in stoppage time, to snatch Barcelona 2-1 victory over its host Real Betis in the 35th round of the Spanish Football League, and ensure qualification for the Champions League next season. 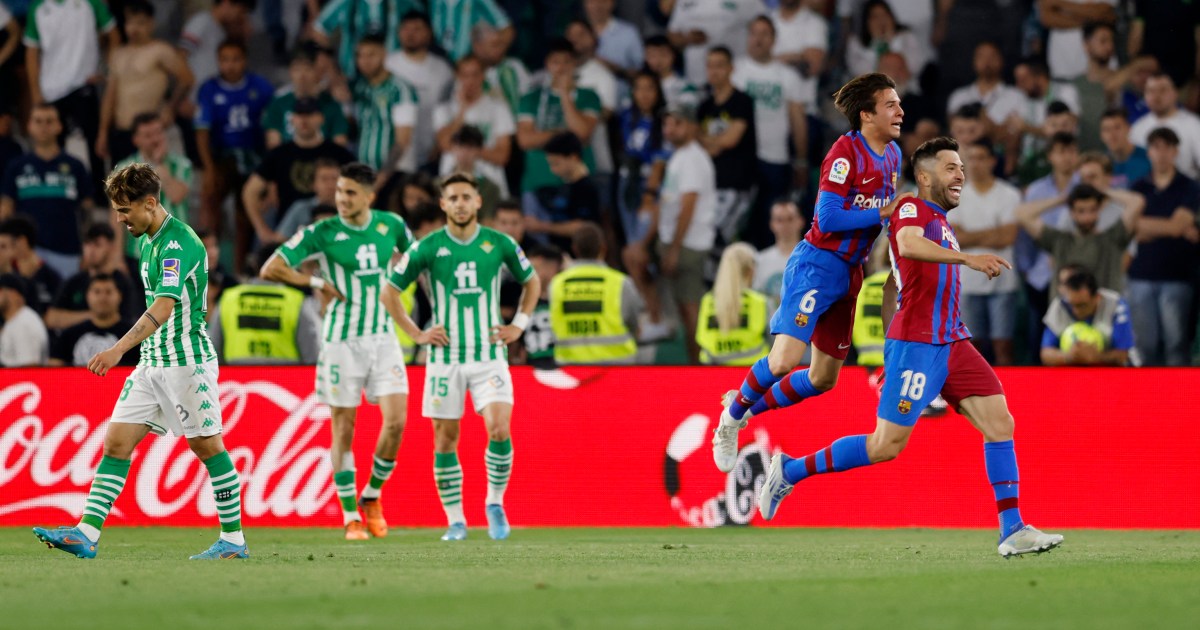 Defender Jordi Alba scored a goal in stoppage time, to snatch Barcelona 2-1 victory over its host Real Betis in the 35th round of the Spanish Football League, and ensure qualification for the Champions League next season.

With Real Madrid winning the league title earlier, Barcelona is in second place with 69 points, 5 points behind third-placed Seville and fourth-placed Atletico Madrid, both of whom have one additional game.

Barcelona is close to occupying the second place, and obtaining 3.4 million euros for participating in the Spanish Super Cup, which is being held in Saudi Arabia.

On the other hand, Betis missed an opportunity to equal points with Atletico Madrid in its quest to qualify for the Champions League next season, as it remains in fifth place with 58 points, three points behind the semi-finals.

And the goalless draw between Barcelona and Real Betis remained for 75 minutes until substitute Ansu Fati opened the scoring for Barcelona.

Real Betis then equalized through Marc Bartra in the 79th minute, but Jordi Alba snatched the winning goal for Barcelona in the last seconds of the match.

Summary of the superiority of "Barcelona" over "Real Betis" and the official guarantee of European participation next season 📺# RealBetisBarça 1-2 pic.twitter.com/6cPCAmiQbL

In other matches, Granada left the relegation positions in the league table after beating its host Real Mallorca 6-2, and the same round today witnessed a 0-0 draw with Athletic Bilbao with

In the second half, Granada added five more goals, scored by Sergio Escudero and Antonio Puertas in the 47th and 55th minutes, Jorge Molina (two goals) in the 69th and 90th minutes, and Mirto Ozoni in the 78th minute, while Antonio Rilo scored the second goal for Real Mallorca in the 58th minute.

Granada's balance rose to 34 points, to rise from the eighteenth place to 17, while Real Mallorca's balance froze at 32 points, to fall to the 18th place.

Valencia reduced Athletic Bilbao's chances of European participation after a 0-0 draw, in a match that saw Hugo Guiamon expelled from Valencia in the last seconds.

Celta Vigo achieved a great victory against Deportivo Alaves and beat them 4-0, bringing the first to 43 points in eleventh place, and Alaves' balance freezes at 28 points in the twentieth place.

The four goals for Celta Vigo were scored by Thiago Gallardo in the sixth minute, Iago Aspas (the second and fourth goals) in the 34th and 66th minutes, and Alaves' Joaquim Navarro by an own goal in the 57th minute.