The “circular celebration” .. the history of Ainawi heralds more tournaments

Al Ain players held each other's hands for the second time this season, and formed a large and anti-clockwise circle in front of the stands of their fans at Mohammed bin Zayed Stadium, the day before yesterday, but this time they placed the League Cup in the middle of the circle to celebrate their victory in 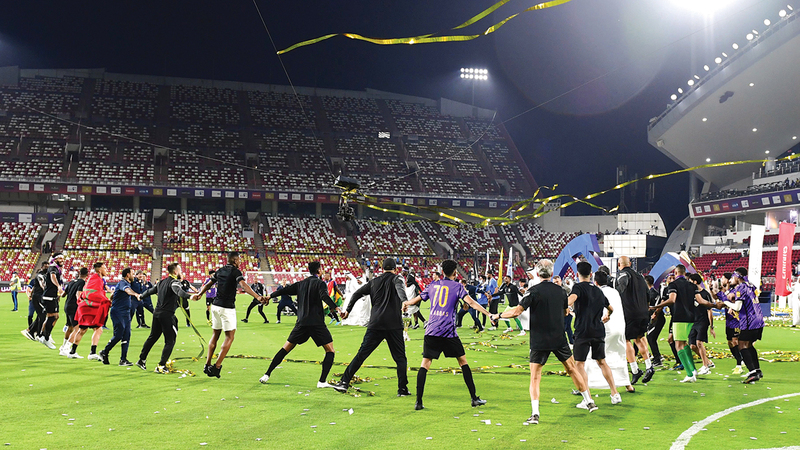 Al Shamsi: Holding hands shows the strength of bonding between everyone

The “circular celebration” .. the history of Ainawi heralds more tournaments

Al-Ain players held each other's hands for the second time this season, and formed a large, anti-clockwise circle in front of the stands of their fans at Mohammed bin Zayed Stadium, the day before yesterday, but this time they placed the League Cup in the middle of the circle to celebrate their victory over Shabab Al-Ahly in the final match, which ended in their favour, with a penalty shootout 5-4, after the end of the regular time with a positive draw 2-2.

This is the second time during the current season that the Al-Ainawiya celebration appears, as the team's players carried out it to celebrate the victory of the "Winter Champion" after the precious victory over their guest Al-Nasr 3-1 in the 11th round of the ADNOC Professional League, a victory that guaranteed the "leader" at the time. The first leg was settled two rounds before the end of the first round, and the celebration may be repeated again, as Al Ain is close to achieving the League Shield, as it leads the standings with 52 points, seven behind Al Wahda and five games before the end of the season.

The "leader" was crowned the League Cup title for the second time in its history after waiting for 13 years since the first title he was crowned in 2008-2009, and he deserved the title in sympathy for the performance he presented during the match, despite how many opportunities the team's players squandered, specifically during the second half. .

Al-Ain team manager, Ahmed Al Shamsi, explained the reason behind this celebration with each title achieved by their team or winning important matches, saying: "The intertwining of the hands of those inside the circle demonstrates the strength of interdependence between everyone within the team's components, which clearly contribute to achieving achievements."

Al Shamsi told "Emirates Today": "The department also reflects that everyone is one family, including the coach, players, the administrative body, the board of directors, therapists, task workers and the driver, and that all their contributions reach the team to achieve its goals of achievements, one of which was the crowning of the League Cup."

Al Ain team captain, goalkeeper Khaled Issa, was keen to remind the players of the importance of the celebration, and asked them to stop taking pictures with the cup and go to their fans and supervise the drawing of the circle, in response to the kindness of the fans who were keen to support the team in the match and during the current season, after they were absent from matches. Her team in the past three rounds, in implementation of a penalty issued by the Disciplinary Committee due to the riots that accompanied “El Clasico” in front of Al Wahda in the league.

The Al Ain team manager said that the title was achieved due to the desire of the players, the coach's work and the management's planning, stressing that "Al-Ahly youth is definitely a great team and deserves respect, and they were a strong match for us on the field, and it is good that success was our ally."

For his part, the President of Al Ain Football Club, Dr. Matar Al Darmaki, praised, in press statements, the efforts of the members of the Board of Directors of Al Ain Football Club, the Technical Committee for Professionalism, the technical and administrative bodies, the players and every member of the club, and praised the important role that Al Ain fans continued to play, and said that it is "I have actually contributed to achieving the club's goals through continuous support and exemplary encouragement from the Ainawi stadium and social media platforms, and the reality confirms that the Al Ain fans always make the difference."

He continued, "Everyone realizes that the time interval between Al Ain matches during the upcoming matches is very short, so the team is required to recover, focus and adhere to the preparation program for the important match, after it successfully completed its mission in the Cup competition."

• Al-Ain is on a date with another joy if it achieves the league title, as it needs to win three matches out of the five remaining until the end of the season.

Al Ain coach: The celebration is over, and we have to focus heavily against Al Dhafra

Al-Ain coach, Ukrainian Sergey Rebrov, said that his team's celebration of the cup ended with the coronation ceremonies directly, and that all the team's players should prepare to face Al Dhafra tomorrow in the 22nd round of the ADNOC Professional League.

And that match requires them to focus double to win and get closer to achieving the league title.

He added in the press conference: "I expected that our task would not be easy, and indeed, Al-Ahly youth appeared well and gave a distinguished return, and the first half of the game was different from the second, but we regained our balance in the second part of the match, and we were able to achieve our goal."

On the reason for the team's restoration of balance in the second half, he said: "We were keen to analyze the performance and identify the errors that appeared in the first half, and I told the players between the two halves that we are required to redouble efforts and focus more and get rid of tension and pressures to win the challenge, and indeed we succeeded."

And about wasting easy opportunities, he said, "Although we should not have missed them, we scored two goals against a good and organized team."

A state of sadness dominated the coach of the Al-Ahly youth team, Mahdi Ali, after his defeat in the League Cup final against Al-Ain, and considered that “losing by penalty kicks in three final matches he oversaw is a difficult matter,” but he indicated that it is the reality of football, and that they have to accept it.

He said in the press conference that his team players dealt well in removing the danger from the team's goal, but some of them easily lost the ball in the middle of the field, and that this caused counterattacks through which the Al Ain team managed to score two goals in the match.

Caio.. ends the long wait and achieves his first title

Al-Ain team player, the international Caio, ended eight lean years of his life he spent in the country without achieving any championship, although he was close before to winning with his former club Al-Wasl and his current team Al-Ain before, but luck remained stubborn for the player in the last few metres, before he Caio reconciles his team's fans after a state of estrangement between him and the fans' happiness, as he scored in the cup final and directly contributed to crowning the "leader" with the title.

Caio said in a press statement after the end of the match, while holding the championship cup, that he felt a great state of joy as a result of winning the title, pointing to his suffering not to win any championship since he arrived in the country for the first time when he moved to the ranks of his former team Al Wasl before moving later to Al Ain team. .

The international player will be on a date with a second title this month, as Al Ain leads the ADNOC Professional League standings with 52 points, seven behind its closest followers, Al Wahda team, five rounds before the end of the season, and the team is enough to win three matches to achieve the league title for the 14th time in the club’s history. .

Caio said that his and his teammates' morale after winning the League Cup should benefit from it to continue achieving victories, and concluded: "Important confrontations await us in the remaining matches in the league, and we must be fully prepared for them."