Kaprizov's hat-trick and Kucherov's three points: how the Russians entered their names in the history of the NHL playoffs

Kirill Kaprizov and Nikita Kucherov became the protagonists of the second matches of the quarterfinal playoff series of the Western Conference. For the first time in the history of the club, the Minnesota forward scored a hat-trick in the Stanley Cup and brought his team a victory over St. Louis. And the Tampa forward scored three points, scoring a goal and making two assists in a meeting with Toronto. How Russian stars helped their teams even the score in confrontations - in the RT material. 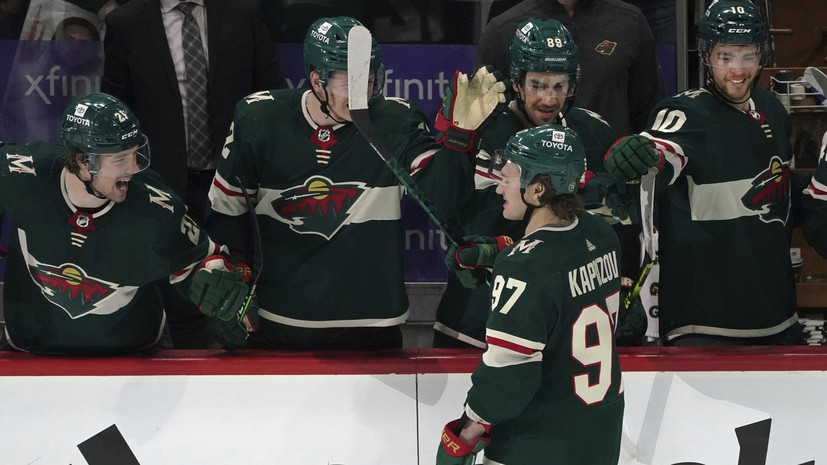 "He tasted the heads"

The first match of the series "Minnesota" and "St. Louis" turned out to be a failure for the "savages".

This was due, among other things, to the fact that the opponent acted very competently against the Russian star, not giving the striker space for sharp attacks.

This was also seen by Wild head coach Dean Evason, who, as he explained after the meeting, made some adjustments to the game of the whole team.

“We talked after the defeat about how Cyril or we need to act to give him more space ... He will just bend his own.

Just go ahead, do what you have to.

This shouldn't come as a surprise.

He perceives this as a big challenge, today he showed just such an approach and played excellently, ”the official NHL website quotes the specialist.

However, it took time to rebuild and find space for forwards.

The first 10 minutes the hosts again could not cope with the pressure and could not organize a normal attack on the gates of Villa Husso.

However, then the team played out.

First, Yoel Ek excelled, and then Frederic Gaudreau in the majority.

Point in the first period was put by Kaprizov, who also scored in unequal compositions.

At the same time, Justin Faulk, the defender of the Blues, was on the penalty box both times.

Kirill's goal turned out to be spectacular: first, the puck flew into the post, and then bounced off the Finnish goalkeeper's trap into the goal.

The second period was a continuation of the first.

Minnesota did not slow down, and already at the 21st minute, Ek scored a double and made the score 4:0.

However, this was followed by three removals in a row, and the “bluesmen” could hardly but manage to use the numerical advantage.

The team had a chance to return to the game, especially after Vladimir Tarasenko also scored from the transfer of Pavel Buchnevich.

But the St. Louis fans did not rejoice for long.

It took Kaprizov less than a minute in the third period to score twice and set the final result - 6:2.

Kirill rewrote the history of Minnesota again, becoming the first club player to score a hat-trick in the Stanley Cup.

There could have been two record holders, but the referees did not count Ek's puck at the end of the meeting.

Among the Russians, Kaprizov is the ninth hockey player who scored three times in a Stanley Cup match.

The former head coach of the Russian national team Vladimir Krikunov, talking about the performance of Kirill, noted the striker's focus on the opponent's goal.

“I did not work with Kirill personally, but he regularly spoiled the mood of my teams.

I told the defenders, “Watch this guy.

He seems to be gone, but as soon as the puck bounces, he will be there.

Don't look at the puck after the shot, but behind it.

He has such a quick reaction to these moments!

In the first game with St. Louis, he was somehow blocked, but in the second game he found his way to the net.

This is a great talent, a very gifted guy, ”RIA Novosti specialist quotes

Naturally, this is a pleasure for the fans, we support Kirill, let it go on like this.

Kaprizov has already shown himself as a leader, a guy who decides the fate of the match.

We can only congratulate you: keep it up, the main thing is no injuries!”

- said Kamensky in an interview with the Championship portal.

According to a similar scenario, the Tampa series with Toronto is still going on.

The first meeting was a nightmare for Lightning fans, the team conceded five unanswered goals and looked very faded compared to their rivals.

However, in the second match, John Cooper's wards were transformed and were able to show a completely different game.

The draws of the majority became key in the confrontation.

Unlike the previous meeting, when out of five attempts, the Lightning did not use a single one.

By the beginning of the second twenty-minute period, the score was 2-0 in favor of John Cooper's team: Victor Hedman and Corey Perry scored.

After that, the stars of Toronto, it would seem, joined the fight and even won back one goal.

However, then Nikita Kucherov made him talk about himself.

First, the Russian scored himself, having converted another majority.

Hedman acted as an assistant, who saw the forward standing alone.

And then Nikita helped his partners twice: after his programs, Brandon Hagel and Braden Point distinguished themselves.

The Russian thus scored the 130th point in the playoffs, became the 46th in the history of the NHL who overcame this milestone, and only the fourth among the Russians after Sergei Fedorov, Evgeni Malkin and Alexander Ovechkin.

Hockey players of "Toronto" tried to pull out the match and even scored twice in the end against Andrei Vasilevsky, who repelled 31 shots during the match and also set a record.

Braden Holtby of Dallas has the same result, and Marc-Andre Fleury of Minnesota has the most wins with 90.

The score in the series became 1:1 and it looks like everything is just beginning in this confrontation.

As Cooper noted after the game, an unsuccessful start helped his team to get together and show character in the return game.