China News Service, Xi'an, May 2, topic: "playing" niche sports into public life: Generation Z "moves" in the name of socializing   China News Service reporter Zhang Yichen   "Flying disc is a combination of sports, social attributes, and trend attributes. Because of this, the sport is rapidly expanding among peers around him." Zhang Bo, a "post-95" Frisbee enthusiast in Xi'an admitted, "Recen 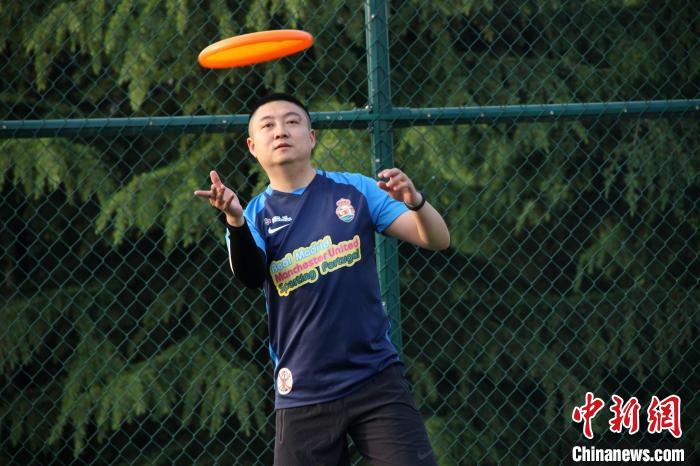 "Flying disc is a combination of sports, social attributes, and trend attributes. Because of this, the sport is rapidly expanding among peers around him." Zhang Bo, a "post-95" Frisbee enthusiast in Xi'an admitted, "Recently, playing Frisbee is 'addictive'."

Recently, with the pursuit of fashion and trend-setting "Generation Z" groups, the once niche sport, Frisbee, quietly "out of the circle" has become a new favorite sport for urban youth, and there are many people posting "frisbee" on social platforms.

"The sport combines the touchdowns of football, the pivot foot technique of basketball, and the movement awareness of football. At the same time, the rules of Frisbee do not allow physical contact between players, which also makes it possible for men and women to compete on the same field." Ge Xin, the vice-captain of the Xi'an branch of the Superluminal Frisbee Club, told a reporter from Chinanews.com that two to three Frisbee activities are organized every week, with about 40 participants each time.

"Frisbee has a strong communication power among young people in Xi'an. My teammates include musicians, designers, media people, baristas and other people from all walks of life." Wang Jiayuan, who has been "panning" for half a year, already belongs to the team "Veteran", she said, as far as Frisbee is concerned, there were very professional teams in Xi'an ten years ago, but they did not "out of the circle".

In the current wave of Frisbee craze, due to the injection of social attributes, it has become an emerging project that attracts the attention of young people.

With the opening of the "May Day" holiday, outdoor sports in the city are heating up.

On a sports field in the southern suburbs of Xi'an, more than a dozen Frisbee enthusiasts competed. Facing the defenders, Wang Jiayuan quickly passed the Frisbee to her teammates, and the teammates in the scoring zone jumped into the air to grab the Frisbee, and they were on the court. The cheers and cheers were heard incessantly.

"Every time I catch a Frisbee, I actually receive a trust from my teammates and a sense of connection between people." Wang Jiayuan said bluntly.

Similar to the avoidance of "physical contact" in Frisbee sports, a "non-collision" sport, flag football, has also become a "favorite" for many "Gen Z".

Li Zhou, a guy from Xi'an, just founded a flag football club this year, and the current customer base is close to 1,000.

"This sport is very conducive to social interaction, because it focuses on team spirit, especially the communication between people." Li Zhou said that for those who participate in this sport, no matter what industry they come from and what social role they play, At this time, it is necessary to have the qualities of courage, unity and discipline. While strengthening the body and tempering the will, it also brings a positive impact to life.

According to data released by a platform, during the Qingming holiday in 2022, the search volume related to Frisbee increased by about 24 times compared with the same period last year.

The search volume of emerging sports such as flag rugby also showed a rapid increase.

In addition, the topic of "Flag Rugby" has more than 2.3 million views on Weibo.

"The green grass is matched with the blue sky, young people are running passionately and sweating on the field... This scene has greatly increased the 'film production rate', and the circle of friends released has attracted more attention than usual." "Otaku" Li Yuxiao said The "truth" of participating in flag football is revealed.

Sun Jinyuan, a teacher in the Physical Education Department of Xi'an Medical College, said that the "label" of strong social interaction, weak confrontation and low threshold has made "niche" sports into the public life, and young people have paid more attention to the sociality and fun in sports. , Burning calories in the name of socializing has become the original intention of many young people to "get moving", and it also highlights the increasingly diverse ways of exercise and fitness.