Emirates clubs concluded their participation in the group stage of the AFC Champions League by qualifying Al-Ahly youth to the round of 16, and the exit of Al-Jazira and Sharjah, after the three clubs got only 19 points (54 points for the 18 matches they played), while Al-Ahly youth will play a confrontation of the third caliber. 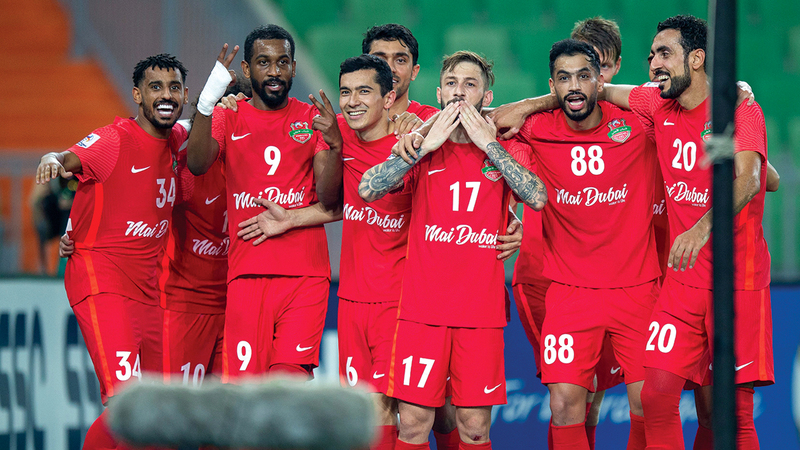 Al-Ahly youth qualified for the next round as the best seconds.

The Emirates clubs concluded their participation in the group stage of the AFC Champions League with the qualification of Al-Ahly youth to the round of 16, and the exit of Al-Jazira and Sharjah, after the three clubs obtained only 19 points (54 supposedly for the 18 matches they played), while Al-Ahly youth will play a heavy-caliber confrontation in The next round after the end of the group stage, against defending champion Al Hilal Saudi Arabia in February 2023.

Despite the great potential of Al Jazeera and Sharjah, the two teams achieved results that did not match the aspirations of their fans, as the "king" finished his career in the group stage by coming third in the first group, after winning in one match over Istiklal Dushanbe, Tajikistan, while losing in three matches. In front of Al Hilal Saudi Arabia, Al Rayyan Al Qatar and Istiklal Dushanbe, and tied in two matches with Al Hilal and Al Rayyan. As for Al Jazira, it finished fourth (the last) in the second group, as it got only four points after winning against Mumbai City of India, and tied with the same team, while losing four games, Twice in front of the Saudi youth and the Iraqi air force.

On the other hand, Al-Ahly youth exceeded the group stage for the fourth time in its history, after qualifying to the quarter-finals for the first time in 2015. By losing to Al-Ahly of Saudi Arabia, then he passed the group stage for the third time in 2020, and also lost to Al-Ahly of Saudi Arabia in the round of 16 on penalties.

Shabab Al-Ahly is among the three unbeaten clubs in the five groups of West Asia, along with the Saudi youth, who topped the second group with 16 points after winning five matches and drawing one match, along with Foolad Al-Irani, who played in the third group with the Dubai Knights. He topped the standings with 12 points by winning three matches and drawing the same number of matches.

Despite the not good start of Al-Ahly youth, with a draw in three matches against Ahal Al-Turkmani, Foolad Al-Iran and Al-Gharafa, with the same result, with one goal for each team, but he presented his best level in the second leg, and achieved the largest victory in the history of the Emirates clubs’ participation in the current system of the competition, by defeating Al-Gharafa by eight goals to two, Then he beat Ahal with two goals to one, and tied with Foolad with one goal for each team, to be in second place with 10 points, and qualify among the top three clubs that ranked second in the five groups for West Asia.

The matches of the 16th round of West Asian clubs were determined, as in addition to the Al-Ahly youth confrontation with the Saudi Al-Hilal, the Saudi youth will meet with the Uzbek Nasaf, the Saudi Al-Faisali with the Iranian Foolad and the Qatari Al-Duhail with the Qatari Rayyan.

The matches of the round of 16 for "West Asia":

The Saudi Crescent and Al-Ahly Youth.

Dates for the knockout stages in 2023

• Shabab Al-Ahly is among only three clubs in the competition that did not lose in the group stage with Foolad the Iranian and the Saudi youth.