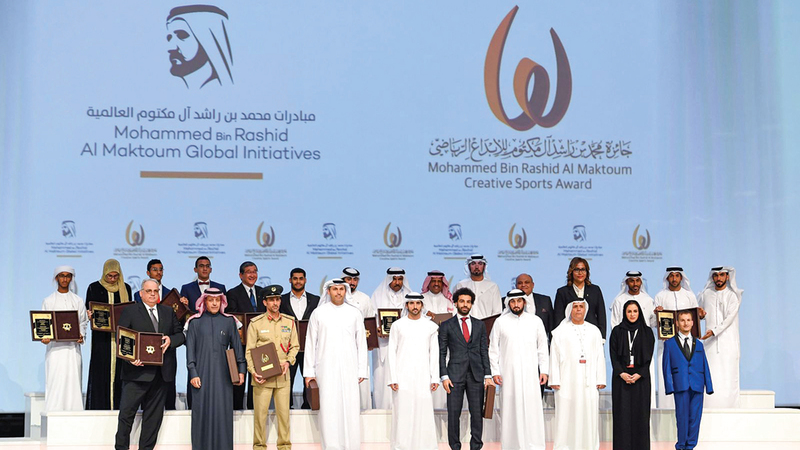 The General Secretariat of the "Mohammed bin Rashid Al Maktoum Award for Sports Creativity" said in a press statement: "The period of achievements eligible to compete for the categories of the current edition will be during the period from September 16, 2021 to August 31, 2023, and that the award winners will be honored in January 2024."

Thus, the candidates for the Sports Creativity Award will spend about 21 months to reach the podium, during the grand celebration that will be held in Dubai on this occasion.

His Highness Sheikh Hamdan bin Mohammed bin Rashid Al Maktoum, Crown Prince of Dubai, Chairman of the Executive Council of the Emirate of Dubai and patron of the award, issued a decision to form the Board of Trustees, which is the fourth formation in the award’s march, to achieve the award’s goals in developing sports and raising the level of achievements at the level of the UAE and the Arab world. And the world, according to the directives of His Highness Sheikh Ahmed bin Mohammed bin Rashid Al Maktoum, President of the National Olympic Committee and President of the Award.

The award’s Board of Trustees held its first meeting last week via remote communication technology, to approve the launch of the 12th session.

In implementation of the decision of the Board of Trustees, the General Secretariat of the Award invited individual athletes, teams, Emirati and Arab institutions, institutions and international sports federations, to submit their nominations to compete for the award categories, according to the levels of individual and collective achievements and the axis of competition within the institutional category.

The statement confirmed that the "Mohammed bin Rashid Al Maktoum Award for Sports Creativity" honored, through 11 previous sessions, 258 winners, from various sports and levels, including 124 winners from the UAE, 116 winners from Arab countries, and 18 winners from international sports federations and institutions, who were distributed among The various categories of the award, with 188 winners at the individual level, 21 winners at the collective level, and 49 winners at the institutional level.

During the past sessions, the award received 2,597 files for candidates, including 748 locally, 1,621 from Arab countries, and 228 at the global level. A project, initiative and sports programme.

The award also maintained the competition categories, in addition to the special discretionary categories, and the continuation of honoring the youngsters with the same mechanism, which is to grant the audience the right to vote, and that the final result should be calculated at 50% of the audience and the same for the decision of the jury, provided that the public voting period is from the first of November 2023, until January 2024.

The award announced the continuation of remote candidacy, via the award’s website and application via smart phones, which also allows registration, submission of candidacy files and uploading the documents required for candidacy. .

The remote arbitration system continues, through the presence of each arbitrator in his country without the need for assembly, and arbitration in the form of working teams, provided that the distribution of arbitration files to them is a mechanism that prevents arbitrators from arbitrating any file of an athlete or institution from his country, and the compilation of decisions and points will be for each A member of the jury and its account, within a program designed by the award’s work teams, to ensure integrity, transparency and complete impartiality in arbitration, and it has been successfully implemented since the 10th cycle of the award.

• Individual sports creativity category: for individual players, coaches, administrators and referees who have achieved sports innovations at the local, Arab and international levels.

• The category of collective sports creativity: for teams that have achieved sports innovations at the local, Arab and international levels.

• Category of Institutional Creativity: for sports organizations that have achieved sports innovations at the local, Arab and international levels.

• The local level of athletes and sports institutions in the UAE.

• The Arab level for athletes and sports institutions from all Arab countries.

• Announcing the names of the winners: November 2023.

Timeframe for eligible businesses to participate

The timetable for nomination and honoring begins in April 2022 and ends in January 2024.

• 2597 files were nominated in the last 11 editions, and 258 winners were individuals and institutions.