Citizens players in Ajman are absent from visiting the net. The exception is “Hilal”

The Emirati players in the Ajman squad missed visiting their opponents’ nets during the 20 matches the team played in the ADNOC Professional Football League. 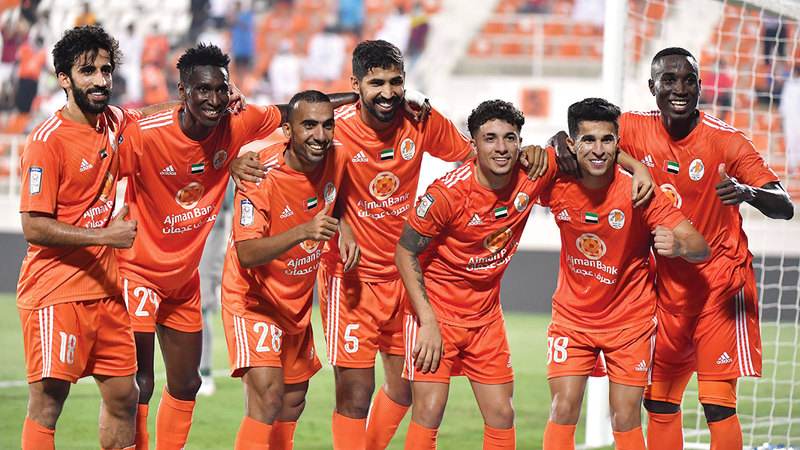 Citizens players in Ajman are absent from visiting the net. The exception is “Hilal”

The Emirati players in the Ajman squad missed their opponents’ nets during the 20 matches the team played in the ADNOC Professional Football League.

Ajman ranks ninth in the league table with 25 points, winning in seven meetings, drawing in four and losing in nine matches.

Orange foreigners emerged this season by scoring 21 goals out of 22, as only the player Mohammed Hilal was able to score the citizens' goal in the 19th round during the Sharjah match, which ended with the King winning 1-2, except for that, Ajman goals came until the 18th round with the feet of foreign players .

Tunisian Firas Belarabi tops the list of orange scorers with seven goals, followed by Aboubakr Traouli with six goals, while the former striker, the Colombian Mina, scored four goals before his departure in the winter transfer period, and the Brazilian Leonardo scored two goals, and one goal each for Moroccan Walid Azzaro, and the defender Slovenian Meral Samardjic.

Ajman occupies the tenth place in the ranking of the league teams that score the most goals, equal with Khor Fakkan, and has the same goal balance.

During this season, Ajman managed to score in 13 games, at a rate of 1.21 per game, while its goals were stopped against Al-Ahly youth, Khorfakkan, Al-Wahda, Al-Wasl and the Emirates, in the first leg, and against Baniyas and the Emirates in the return stage.

Ajman scored from the chances he had in front of the goal, equivalent to 13.84%, which is a weak rate, in sympathy with the opportunities that he had throughout the matches, as his players made 83 shots towards the goal, Firas Al Arabi’s share was alone, of which 36 shots, and they got 96 Corner kick.

Ajman happened to score all his goals with the foot without his players scoring with the head, as 12 goals came with the right foot, and 10 with the left foot.

Orange succeeded in obtaining six penalty kicks this season, scoring five goals, while Abu Bakr Trauli missed one in the Kalba Union match in the second round of the competition.

For his part, the director of the Ajman team, Muhammad Hussein, confirmed that the absence of citizen players from registering remarkably this season is due to more than one reason, most notably that the orange relied in its contracts with foreigners on players who play in the midfield and attack.

He told "Emirates Today": "Ajman does not have citizen strikers, as is the case in clubs such as Al-Jazira and Al-Ahly youth, and therefore the emergence of foreigners at the scoring level is normal, and it occurs in most league clubs."

He added: "In general, the team's scoring of 22 goals in 20 games is good for us, regardless of the player who scored these goals, which is much more than what we scored last season, and if a player like the Colombian Mina scored more goals, as He was the only striker the team relied on inside the box. The percentage of Ajman goals would have been much higher than it is currently, especially since we managed to score a higher percentage of goals in the second round, after contracting with Moroccan Azzaro.

Muhammad Hussein ruled out that the Ajman attack would be affected in the remaining six matches after the departure of the Gambian player Abu Bakr Trawali to professionalism in Europe, pointing out: “We have qualified substitutes, like the Moroccan Issam Sahiti, along with the Brazilian Leandro, and with the return of the Moroccan Walid Azzaro from suspension in the next match he will appear The team is more offensive than it was in the last Al Dhafra match.”