Dialogue丨Chen Wei: If you are engaged in table tennis, you must be worthy of the word "national ball"

Left-handed racket, tough style of play, straightforward personality, and daring to fight, this may be the impression many people have of the Olympic table tennis champion Chen Xin.   From the slightly rebellious teenager, to the Olympic gold medalist, to the national table tennis coach, Chen Wei bluntly said that he was lucky.   In 2004, in the men's doubles table tennis final of the Athens O 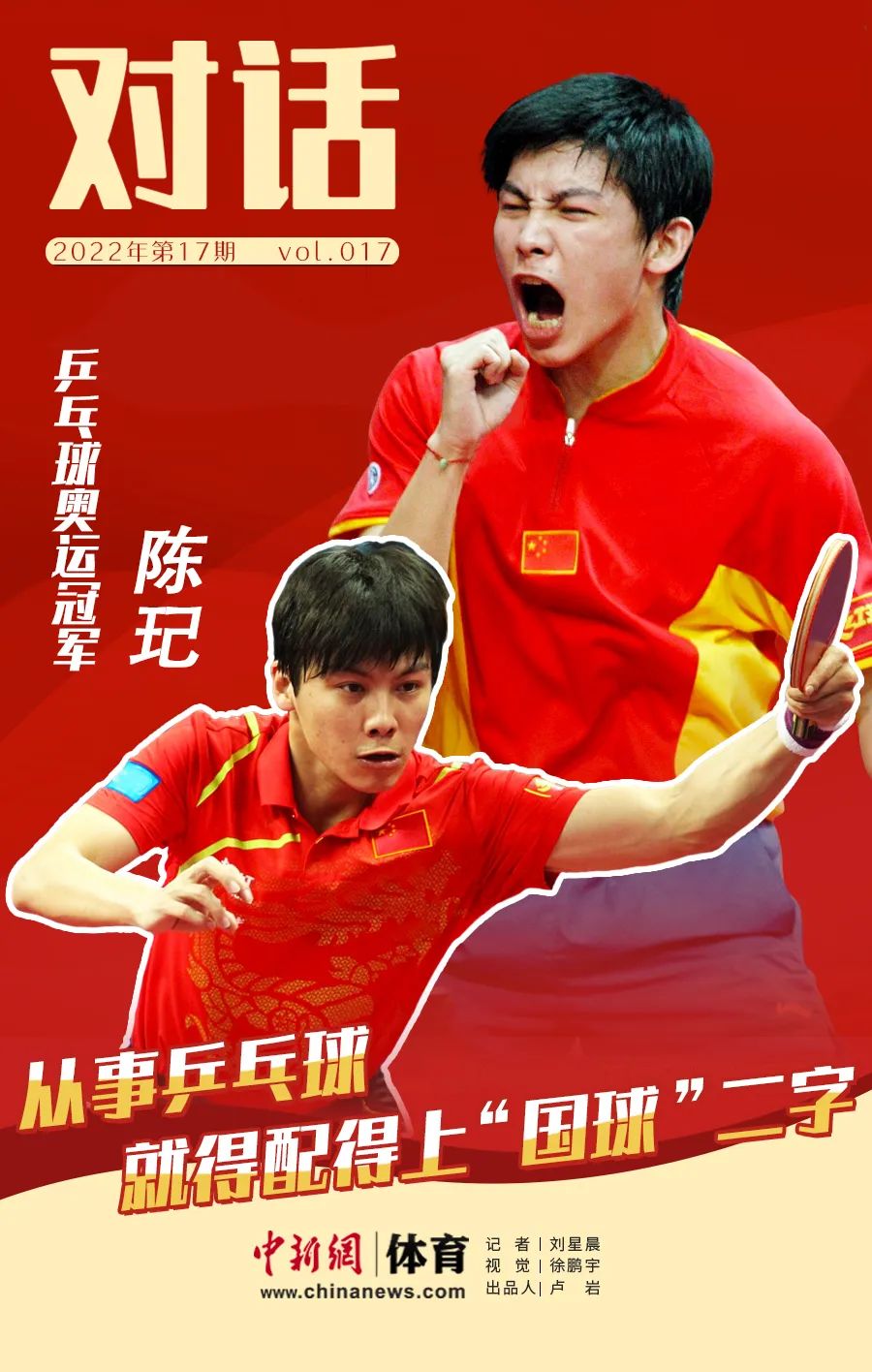 Left-handed racket, tough style of play, straightforward personality, and daring to fight, this may be the impression many people have of the Olympic table tennis champion Chen Xin.

From the slightly rebellious teenager, to the Olympic gold medalist, to the national table tennis coach, Chen Wei bluntly said that he was lucky.

In 2004, in the men's doubles table tennis final of the Athens Olympic Games, Chen Wei, who was only 21 years old at that time, stood on the top podium.

Along the way, he followed the voice of his dream and never stopped.

The role was changed from athlete to coach, Chen Wei showed the word "inheritance" incisively and vividly with practical actions.

Now returning to the provincial team, he is committed to the youth table tennis career.

In Chen Wei's eyes, the process of the young players' impact on the national team is like a replica model of a sculpture, which is very important.

He is willing to let young players take less detours after entering the national team through his own efforts.

In a recent conversation with China-Singapore Sports, Chen Wei shared the bits and pieces of his table tennis career and the national table tennis spirit in his mind.

He said that since he is engaged in table tennis, he must be worthy of the word "national ball".

China-Singapore Sports: How did you first get connected with table tennis?

Chen Wei: When I was young, my parents were busy and didn't have time to pick me up from school, so they asked me to practice a sports event.

Coincidentally, when the school was developing table tennis, I came into contact with it.

After about half a year to a year, I switched to a sports school for training.

China-Singapore Sports: After entering the first national table tennis team in 2002, you quickly proved yourself.

Remember how you felt when you won the championship in Athens?

Did your success at the beginning of your career give you a lot of confidence?

Chen Wei: I was very young at the time, and I had put in a lot of hard work before.

When I went to the competition with Ma Lin, I attacked the opponent with a "fight" mentality. There was not much tension in the Olympic arena.

After I joined the national team, I started in "doubles", and the results I achieved in doubles also provided help in singles training in the future.

China-Singapore Sports: You have played in doubles events many times in your career.

Who was the best partner at the time?

Chen Wei: The first partner was Ma Lin, and they have been together for a long time.

The ideas between us are the same, and we don’t need much communication, and the tacit understanding is still very high.

Data map: Chen Wei is in the game.

The nickname "Kill God" turned out to be a net name

Zhongxin Sports: Fans like to call your nickname "Killing God".

Can you tell us how this nickname came about in the first place?

What do you usually call you when you're playing?

Chen Wei: The nickname "Killing God" was originally my QQ screen name, and that's what everyone called it.

In the team, I usually call me a "starter", which is a bottle opener (starter).

China-Singapore Sports: According to the information, before you entered the first national table tennis team, you had a difficult time during the national youth team and the second national team.

How was it adjusted then?

Now that times have changed, will there be another state of mind?

Chen Wei: At that time, I was accompanied by my family, and the coach of the Jiangsu team was also encouraging me.

At that time, there happened to be the Super League of Table Tennis, and I went to challenge older opponents. After defeating them, I increased my confidence.

During this period, I also met Chairman Liu Guoliang, and he advised me not to give up.

After participating in the National Table Tennis Championships, the top 8 singles players can directly enter the national first team.

That year, I played well, and I came to the national first team.

Looking back, I was lucky.

At that time, I was more rebellious and made some mistakes.

But it's good to have someone guide you back on your feet during critical times.

China-Singapore Sports: After your playing career, you served as the head coach of the Jiangsu men's table tennis team.

How did you think about it at the time?

From athlete to coach, what do you think this transition of identity takes?

Chen Xin: This is a transformation of identity and concept.

After serving as a coach, you need to think from the perspective of an athlete.

How to express your thoughts through language and let the athletes play table tennis well according to your arrangement is the most critical.

China-Singapore Sports: After that, you served as the coach of the first team of the national men's team and became a member of the headquarters in the strategic system for the preparations for the Tokyo Olympics.

What growth did that experience bring to you?

Chen Wei: This is a precious experience.

The comrade-in-arms who worked with you in the past has now become a master-apprentice relationship. This transformation requires two people to communicate more.

The players of the national team have a high level of competition, and they have almost no shortcomings. How can the coach make them improve again through communication and observation? This is a difficult point.

During the preparations for the outbreak of the epidemic, the team made a lot of efforts in order to allow the players to stand on the Tokyo Olympics.

Data map: Chen Wei is in the game.

China-Singapore Sports: At the current point in time, do you have any new plans for the future after returning to the provincial team?

What do you think of the Chinese youth table tennis career?

Chen Wei: After returning to the Jiangsu team, I now focus on youth table tennis and devote myself to the training of reserve talents.

At present, the construction of youth echelon is not as strong as before, and the growth of youth is still very important.

Just like sculpture, if you can do better in copying the model, it will be better to sculpt later.

Children today are different from ours.

We slowly gained experience at the time, and eventually saw the rewards.

Many teenagers now have to see the effect, otherwise they will think that what you said is wrong.

I think with patience and long-term planning, there is a need for new ideas in youth training so that they can be better guided.

China-Singapore Sports: There are many works on your social media that are related to children's daily life.

Have you considered letting your child join the table tennis career in the future?

Do you have any interesting things to share with you as you grow up with your children?

Chen Wei: I'm not ready to let them play.

For now, let’s get to know this sport briefly, and if you want to try it in the future, there is no problem.

It is a pleasure to be able to accompany the children to grow up.

Data map: The award ceremony of the 49th World Table Tennis Championships in 2008.

China-Singapore Sports: You made a cameo appearance in the sports-themed film and television drama "Winning Gold".

What kind of opportunity made you choose to star in the show?

How did this experience make you feel differently?

Chen Wei: At that time, retired athletes were invited to participate in the play.

It is indeed related to table tennis, and I am involved in it.

This kind of activity gives me the opportunity to "go out and see the world" and experience a different way of life.

China-Singapore Sports: "The national table tennis per capita comedian", there is such a saying among the fans.

Because I have been practicing table tennis since I was a child, everyone knows each other very well, and the communication will be very relaxed and happy.

This is also the reason why everyone thinks that "the national table tennis per capita comedian".

China-Singapore Sports: Chinese table tennis occupies a dominant position in the international arena, and it is also the object of admiration and learning.

What do you think of the national table tennis spirit?

What message do you have for your brothers and sisters?

Chen Wei: The national table tennis spirit is a kind of sportsmanship.

This project has its particularity, and what it undertakes is not the same.

When doing many things, Guoping may be more strict, more self-disciplined and more restrictive than other teams.

Since I have been engaged in this project, I have to carry such a burden on my shoulders, and I have to be worthy of the word "national football".

I hope that the younger brothers and sisters can continue to work hard, and China's table tennis will be better in the future!