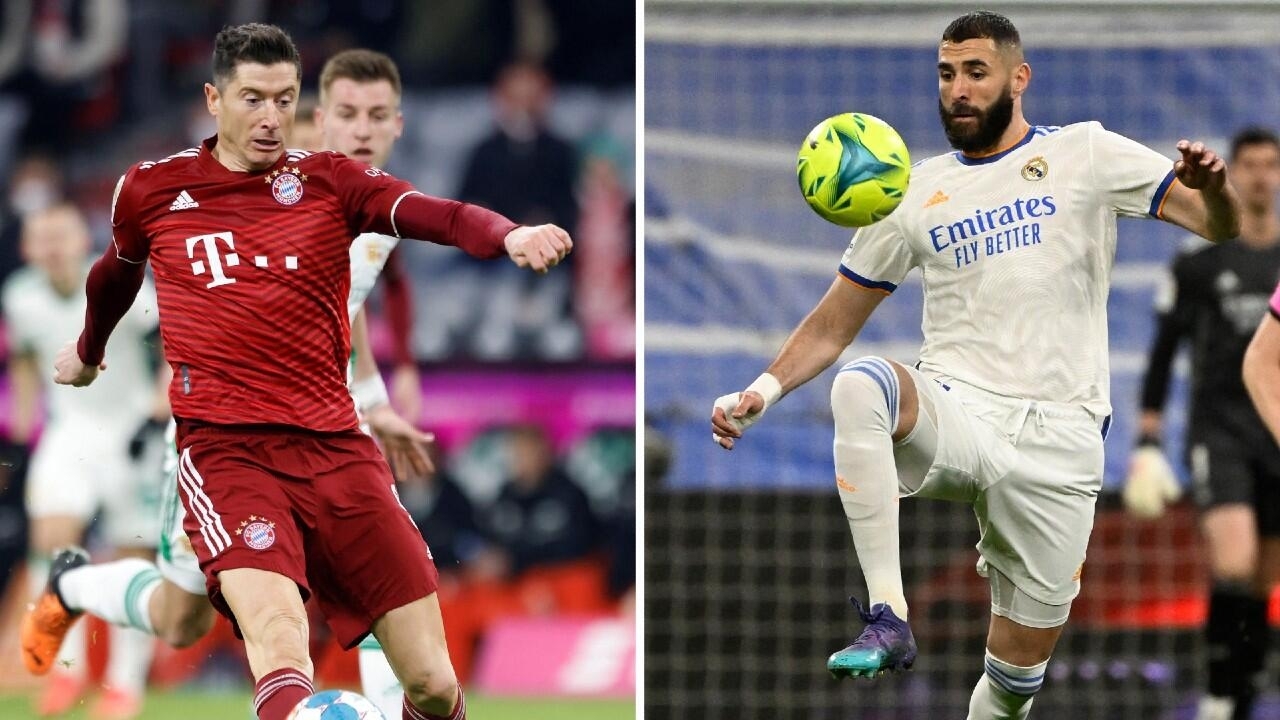 It often takes a great goalscorer to make a great team.

With Karim Benzema and Robert Lewandowski, Real Madrid and Bayern Munich have theirs for the Champions League quarter-final return matches on Tuesday April 12, respectively against Chelsea and Villarreal.

For these relentless scorers never satisfied, this decisive round of the C1 could mark a turning point in their season and their quest for records with an eye, already, on the Ballon d'Or.

Thematic comparisons between the two scorers.

Will the evening mark a turning point?

Sparkling consistency so far, Robert Lewandowski is indeed close to a resounding elimination with Bayern Munich, beaten (1-0) in the first leg, while Benzema arrives at the Bernabéu stadium in full confidence after his hat-trick in the first round against Chelsea (3-1).

The last few weeks have allowed "KB9" to get closer to the Bavarian: his two hat-tricks, in the eighth return against Paris SG (3-1) then in London, have doubled his total goals on this edition of the C1.

With eleven units, the French international is hot on the heels of Bayern's center-forward (12 goals), leader of the classification.

Karim Benzema has been voted player of the month at Real Madrid.

Benzema "is improving every day like good wine. He is more and more a leader in the team, in the group, and I think that is the biggest difference," his coach, Carlo Ancelotti.

The Pole, always irresistible on the grounds of the Bundesliga, keeps a small margin over his rival when taking into account national competitions: with 46 goals in 40 matches, including a penalty scored on Saturday against Augsburg (1-0), "Lewy "has nine points more than "Benz" (37 goals in 37 matches).

• The goals in the history of the C1: advantage Lewandowski

At 33 against 34 for Benzema, Lewandowski also has a slight advantage in the history of the Champions League: with 85 goals scored in the queen event, the Pole is firmly on the podium of the greatest scorers, behind Cristiano Ronaldo ( 140 goals) and Lionel Messi (125), eliminated in the round of 16.

"He scores in every game. When you're a striker, you sometimes have periods without scoring, but he doesn't seem to know that," his Bayern partner Serge Gnabry recently enthused on BT Sport.

"Lewy" has the image of Benzema growing in his rear view mirror: the former Lyonnais has scored 82 goals, which promises a tight chase until the end of their career.

The Bavarian also prides himself on holding crazy marks in Germany: the record for goals (41) in a Bundesliga season (held until last year by Gerd Müller) and the best mark in a calendar year (43 goals in 2021), in particular.

At Real, Benzema for his part had to wait a long time behind the legend Cristiano Ronaldo, slow to climb the ladder in the individual rankings.

But he is approaching dizzying marks, like that of Raul's 323 goals with the merengue club.

With 316 units, the Frenchman will soon become the second most prolific attacker in the White House, far behind "CR7" (450).

Double holder of the trophy for best Fifa player of the year and second for the Ballon d'Or 2021, Lewandowski appears, this time, left behind in the race for individual awards, which is already in full swing.

On track to be champion of Spain, he also has an international title in his pocket, in the League of Nations.

And this has not escaped the keenest observers.

"I said two years ago that he was arguably the most underrated player in world football, that may not be the case anymore," the Chelsea manager recently confirmed. Thomas Tuchel.

When will a Benzema-Lewandowski explanation be on the same lawn?

The duel is only possible in the C1 final this season ... but could become more regular next year if "Lewy", at the end of the contract in 2023, chooses Barça, as mentioned by several media.

Another meeting on the agenda, the World Cup-2022: France-Poland is a possible confrontation at the stage of the round of 16 in Qatar.

And the two scorers are no doubt eager to fight it out.

Top scorers after the first quarters of C1