[New ideas lead a new journey] The Winter Olympics will promote the vigorous development of the national fitness movement   CCTV News (News Network): General Secretary Xi Jinping pointed out that the popularization of national fitness is an important symbol of the modernization of a country. Since the 18th National Congress of the Communist Party of China, the CPC Central Committee with Comrade 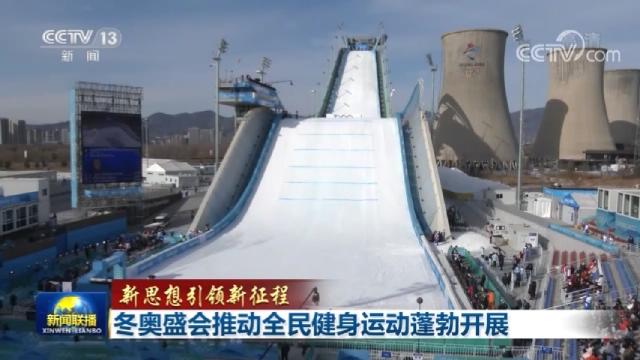 CCTV News (News Network): General Secretary Xi Jinping pointed out that the popularization of national fitness is an important symbol of the modernization of a country.

Since the 18th National Congress of the Communist Party of China, the CPC Central Committee with Comrade Xi Jinping at its core has attached great importance to sports work, and has elevated national fitness to a national strategy.

Under the personal planning, deployment and promotion of General Secretary Xi Jinping, the Beijing Winter Olympics and Winter Paralympic Games were successfully held, which ignited the passion of China's ice and snow sports and filled up the shortcomings of building a strong sports country. National fitness is helping health China Construction.

The Beijing Winter Olympics has just come to an end, and the Shougang ski jumping platform "Xue Feitian" located in the Shougang Park has been opened to the public.

As the iconic venue of Beijing's "Double Olympic City" and a model for re-use of the Beijing Winter Olympics venues, the Shougang Ski Jump will not only actively introduce top-level ice and snow events in the future, but will also become a sports theme park serving the public.

It is understood that some venues of the Beijing Winter Olympics will be open to the public one after another before the "May Day" to serve the needs of the public for sports, leisure and fitness.

General Secretary Xi Jinping pointed out that the Chinese people are the source of our strength in preparing for the Beijing Winter Olympics.

Through the Beijing Winter Olympics, more than 300 million people in China participated in ice and snow sports, injecting new impetus into building a healthy China and promoting people's well-being.

Today, with the successful holding of the Beijing Winter Olympics, the Chinese people's passion for ice and snow sports has been greatly ignited. Ice and snow sports have become the main way for people to exercise outdoors in winter, and the foundation of national fitness has been continuously consolidated.

In Keketuohai Town, Altay, Xinjiang, although most of the country has entered spring, the superior natural and geographical conditions here make ice and snow sports still possible.

Without national health, there will be no comprehensive well-off.

General Secretary Xi Jinping pointed out that national fitness is the foundation and guarantee for all people to enhance their physical fitness and lead a healthy life, and people's health is an important connotation of building a moderately prosperous society in an all-round way.

In Huize County, Qujing City, Yunnan Province, the relocation and resettlement areas for villagers in Shenshan and Shishan districts in 22 townships and towns in the county were incorporated into the planning at the beginning of construction to meet the diverse leisure and fitness needs of the masses.

To widely carry out national fitness activities, venue facilities are the foundation.

In 2014, national fitness became a national strategy. Subsequently, the state issued a series of top-level design documents to coordinate the construction of national fitness venues and facilities. Local governments at all levels also incorporated national fitness into local economic and social development plans, and built 15-minute fitness around residents according to local conditions. lock up.

In Taizhou, Jiangsu, at dawn, the Zhoudai Community Party and Mass Service Center Square, surrounded by farmland, will be lively.

The square is equipped with a full range of fitness equipment and sports facilities such as a football field, which is a good place for the villagers to relax and exercise daily.

A few years ago, it was an overgrown rubbish heap.

At present, more than 37.2% of the people in our country regularly participate in physical exercise, and the public service system for national fitness has basically been established.

The recently issued "Opinions on Building a Higher-level National Fitness Public Service System" proposed that by 2025, the per capita sports area will reach 2.6 square meters, which is equivalent to adding 37,255 standard football fields in the next three years. .